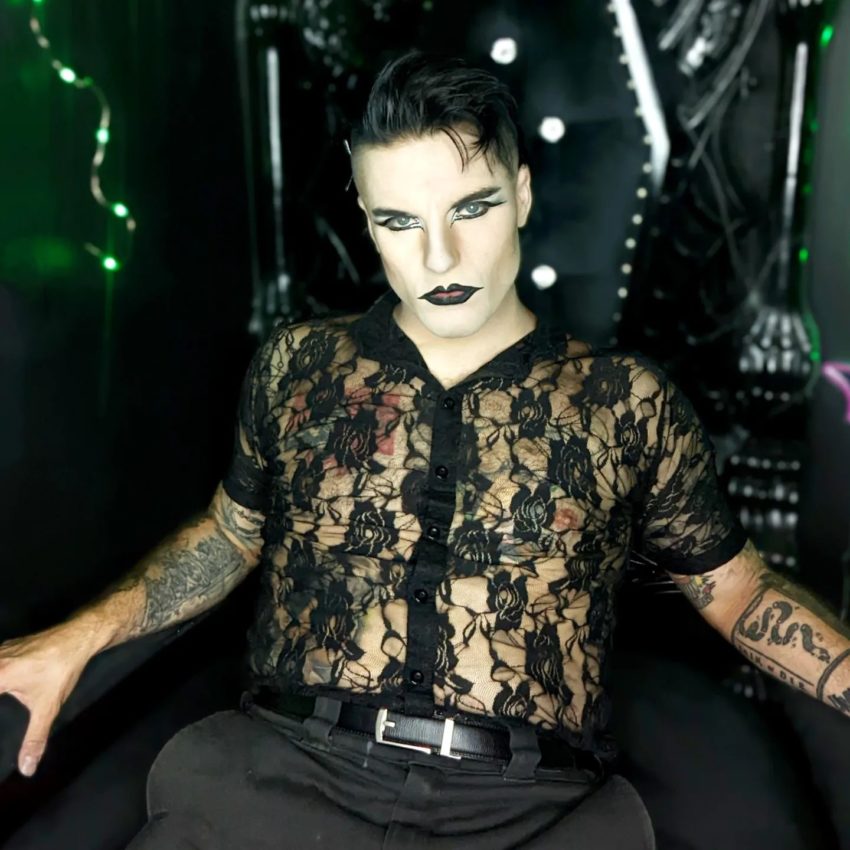 As noted on last week’s episode of the podcast, I Die: You Die turned 11 last week, and neither of the Senior Staff noticed, busy as we were with numerous shows, dayjob stuff and the general hustle and bustle of city life. As is customary we’d like to thank you for your support of this website, and for sharing what we do here on the website; neither of us would ever have guessed we top a decade much less be going strong afterwards, and yet here we are. And it’s all because of you dear reader, you can take that as thanks or indictment, whichever works for you in the moment. Enough chat, back to the task at hand: Tracks!

Vision Video, “Beautiful Day to Die”
Vision Video put out a really excellent gothy post-punk record last year in Inked In Red, its nostalgic (but not derivative) sound attracting attention within and without the trad-scene. At least part of that has to do with the unique perspective drawn from the life of singer and former-Marine Dusty Gannon, whose “Goth Dad” persona has made him something of a presence on Tik Tok. New single “Beautiful Day to Die” is a bit more mellow that the somewhat fraught material on the last LP, but still has the same clean, sweetly melancholic sound that brought the band to the dance.

House of Harm, “In Threes”
Speaking of melancholia, Boston’s House of Harm have added new track “In Threes” to the previously released “Feel My Heartbeat” to make up a new double a-side single, available now via Bandcamp. While a bit slower and more wistful than its flipside, “In Threes” has a real pleasing weight to it, brought through the application of tasteful layers of distortion and reverb, neither of which obscure the track’s lovely melody. We liked the last LP quite a lot, and are curious to see what the next one brings.

Null Device, “Flags”
American synthpop act Null Device fronted by Eric Oehler has a new single “Flags” out, with all proceeds going to the National Network of Abortion Funds. The song maintains Null Device’s trademarks qualities – Oehler and co-vocalist Jill Sheridan’s clarion vocals, fastidious production and sound design – you’re also gonna hear some real anger reflected in the delivery of the song; this is a band who are legitimately angry at the recent SCOTUS ruling and are channeling it into their art.

Prager Handgriff, “Du Bist Wie Du Bist”
Germany’s Prager Handgriff have been active in one form or another for more than 30 years, developing a sound that shoots roots-EBM through with a sort of stoic, teutonic nobility. The first track from new LP Du Bist Wie Du Bist leans heavily into that portentous sound, with tons of epic strings and vocalist Stefan Schäfer’s deep, dignified voice carrying the weight of the track. We’ll be keen to hear if the album leans in this direction or more towards their more classic body music style.

Sydney Valette, “Station Stop”
Parision producer-performer Sydney Valette has a new LP en route from Icy Cold Records, and the first couple of tracks you can sample paint an interesting portrait of the artist. While we enjoy the minimalist electro of the bilingual “Adieu”, it’s “Station Stop” that grabs the most attention: its electro-darkwave of the classic form, replete with the foreboding atmosphere and gravely serious vocals, comparable to other French scene acts like Poison Point (with whom Valette has collaborated) and Potochkine. One to watch out for from an act that has been bubbling under the surface for a while, and seems ready to surface.