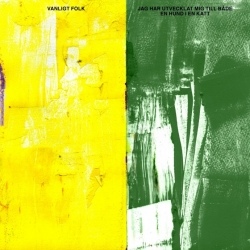 I have no god damn idea what to make of Vanligt Folk. Since my first exposure to their signature brand of Swedish weirdness I’ve found myself drawn closer and deflected away in almost equal measure; while their new album Jag Har Utvecklat Mig Till Både En Hund I En Katt (roughly “I Have Transformed Into Both A Dog And A Cat”) keeps to a rubbery synthesized post-punk pretty much throughout, it often feels like the record is squirming to escape the bounds of its own structure and careen off into territory unknown.

For all their history of drawing from everything from body music to folk music, the music on the LP by and large falls into a kind of downtempo mixture of bass synth and percussion, occasionally bolstered by bits of organ, synth strings shot through with their trademark yelps and cartoonish growling. At times it captures the exotica-tinged end of Fad Gadget’s catalogue: “Teknifatalist” specifically invokes Tovey’s tenser moments, bells and all. “Blott Mej Skall Du Ha” gets a pretty bouncy little bassline going before ending abruptly mid-verse at two minutes and seven seconds, as if they grew bored of the song and chopped it haphazardly down for vinyl inclusion.

Considering their spastic tendencies, it is a touch unusual exactly how low-key a lot of this record ends up being in practice. The plodding “För Att Dom Säger Att Man Skall Ha en Och För Att Jag Har Råd. Man Unnar Sig.” doesn’t exactly reach out to grab the listener with its spring reverbed drum hits and dubby bassline. That’s mirrored in “Kanske En Body Dub”, which doubles down on the psychedelic dub vibes. Hell, they could have had a serviceable single out of the catchy “ooh ooh”s on “Vitt Skum”, but deliberately sabotage by basically leaving it as a demo, complete with some tape hiss and what sound like done-in-one take vocals. Is it self-sabotage or restlessness? Vanligt Folk are kind of inscrutable that way.

It’s tempting to chalk up my confusion with this band to some cultural barrier but then again, I have it on good authority from a few native speakers that Vanligt Folks aren’t much easier to parse as a native Swede. That’s pretty heartening, actually. It’s not some massive in-joke you have to be Sverige to get; this is pretty much just who they are. And although I don’t feel like the immediacy born from their earlier pop leanings is very present on Jag Har Utvecklat Mig Till Både En Hund I En Katt, I do love how defiantly eccentric Vanligt Folk remain. With their music the challenge is in trying to understand, but not necessarily to enjoy.