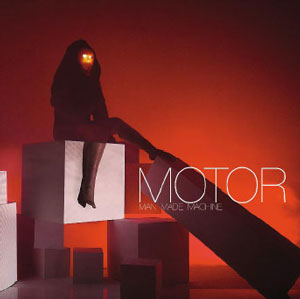 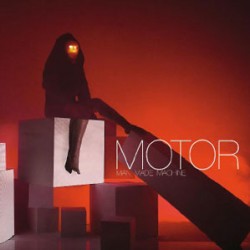 Motor belong to a school of producers and musicians that embrace and celebrate the common roots of techno and electro with EBM, and much of what constitutes the electronic music currently gathered under the industrial umbrella. Although 2005’s This is Techno Body Music (actually a pretty solid compilation of music from both sides of the divide) sought to define a genre around loosely associated artists like The Horrorist, DJ Hell, T. Raumschmiere and The Hacker, the actual music has proven to be more a mercurial set of influences than an actual school of music unto itself. It’s an intersection that still has a massive amount of unrealized potential, and while Man Made Machine has a solid run at it, the results are only intermittently successful.

Although the techno/EBM divide looms large over Motor’s fourth album, it’s another dichotomy at the root of both its best and worst moments; that of electronic artist as producer vs. songwriter. The latter is mostly expressed via the addition of vocals to the group’s bleepy electro, providing a human and melodic counterpoint. Opening track “Messed Up” works well at combining the two, a crooning and slightly effected vocal riding a synthesized bassline hard across three and a half minutes, vaguely bluesy in the way the like-minded Black Strobe managed on Burn Your Own Church. The rest of the album tends to succeed when it favours the electronic tradition, “Autographic”‘s syncopated and lightly vocoded “Analogue/Analogue/Analogue” refrain serving as more of a rhythmic element. When the group dips over into the organic on the instrumental “Automne” it feels forced, a plinky piano wandering aimlessly between sharp stabs of synthesis.

As the first Motor album to explore the use of vocals in any serious way, Man Made Machine has an enviable line-up of A-list guests, and moreso than anything else it’s their misuse that makes that accounts for the record’s less than satisfactory nature as a listening experience. On paper a record featuring Gary Numan, Martin Gore and Douglas McCarthy should be a synth fan’s dream, but Motor fail to provide them or the other vocalists with much to work against. To wit: none of the songs they feature on are very memorable. The title track features Gore in his slinky loverman mode, with the air sucked out the room by a rote instrumental that never delivers on the initial promise of its thick bass loop. “The Knife” seems more like a cast-off from McCarthy’s work with Terence Fixmer than anything else, while German eurodance icon Billie Ray Martin’s soulful delivery is set adrift against a warbling rise of synths that never coalesces into anything. Numan fares slightly better on “Pleasure in Heaven”, delivering one of his more removed performances in recent memory to decent effect. Although still a trifle it at least feels like a fully developed song amongst stillborns.

The most frustrating thing about the whole affair is that there are good songs that could benefit from the murderer’s row of singers on the album. “In the Dark” and the “Personal Jesus” sounding “Control” are both quite catchy and have plenty of dancefloor potential; their only real failing is in knowing that any of the guests could have murdered on them given the opportunity. I’ll admit that may be an unfair criticism, as the timeline of their genesis in comparison to the other songs on the record isn’t a known quantity. With that in mind, I’m disinclined to call Man Made Machine a failure as a record, outside the context of the album’s wasted potential the brights spots are pretty good. With some more refinement Motor could make what they’re doing work across an LP, but as it stands this machine is less than its component parts.