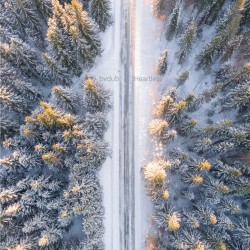 bvdub
Heartless
n5md
Space and distance is absolutely critical to the work of producer Brock Van Wey. His latest in an prolific string of releases, Heartless, is almost a pure distillation of the far-off aesthetic his sound design has taken over the last few years; where drums voices and other musical elements are still present, they’re awash with rich waves of delay and reverb. The result is striking, in that you often feel like you’re listening to the ripples of music that is coming from very far away. There are times, like on opener “Sleepless” and the climactic “Painless” where the massive fog of sound becomes orchestral, ever-crescendoing even as every trace of the original sound is obliterated. In other places, like the “Limitless” voices and piano sounds are permitted to float gently through the mix, retreating but still immediate in comparison to the currents echoing around them. It’s really on a song like “Faceless” that Van Wey takes things to their logical extreme, expressing tone and harmony as massive bodies crashing together, as a single pad builds itself into a glacier of noise. For all that Heartless still feels languorous, the scope and slow motion nature of its design keeping the listener at a safe remove from its 1/100 speed explosions of sound. 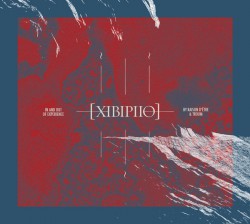 raison d’être & Troum,
XIBIPIIO. In and Out of Experience
Transgredient Records
Despite their shared affinity for deep and reverberating drones, I wouldn’t have ever thought of pairing Peter Andersson’s acclaimed dark ambient project, raison d’être, with prolific German duo Troum. The former’s records like The Stains of the Embodied Sacrifice and In Sadness, Silence and Solitude have always connoted the weighty and abyssal themes of classic dark ambient, while Troum’s work has had an airy and ethereal nature, even while focusing on pondourous and metaphysical themes (see their excellent collaboration with Martyn Bates). Andersson and Troum’s second collaborative effort avoids the potential pitfalls of having to meet somewhere in the aesthetic median by having Troum reconstruct and rework source and sampled raison d’être recordings. The resulting work carries the heavy timbre and thrum of Andersson’s work, but is pressed through Troum’s gauzy filters and at times ornamented with echoing or scraped strings. “Eigi Einhamr” finds the pairing ending up somewhere in Dead Voices On Air territory; a mutually agreed on neutral zone, perhaps? The heady and cosmic ambitions of both projects endures, regardless of the register or whether XIBIPIIO aims for the heavenly or the stygian.