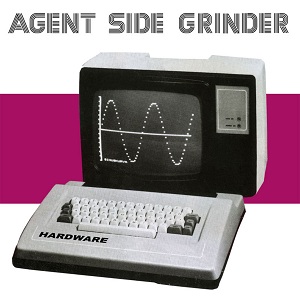 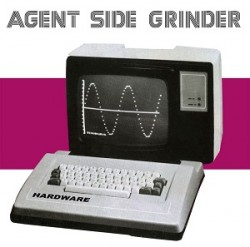 Sweden’s Agent Side Grinder seemingly don’t have any issue with being tagged as a retro act. The band’s own website trumpets their new record Hardware as “a rendezvous with old masters such as Kraftwerk, Einsturzende Neubaten and Depeche Mode”; lofty comparisons, and ones frequently made by plenty of other acts. Where many others falter, and where ASG succeed, is in capturing some of the essence of their influences beyond just aping them for their most obvious identifiers. The result is a record that exists somewhere in the nexus of minimal/coldwave, post-punk and the earliest stages of post-industrial, one that manages to be sparse without being bleak, due in a large part to the analogue warmth of its sounds.

In contrast to the their first two albums that frequently saw the act taking a more chaotic and noisy approach to songwriting, the music on Hardware has a distinctly measured approach, almost metronomic, in fact. The bass guitar and drum machine combo has always been central to Agent Side Grinder’s sound, but never before have the songs grooved this hard. Set against that rhythmic backdrop singer Kristoffer Grip delivers a nuanced vocal performance, shifting between smooth crooning and a restrained mania, deploying each with the canniness required to make songs as slightly arranged as these jump. The overall approach is to make the most of a few elements, as evidenced by “Sleeping Fury”, where propulsive robotic funk with trills and washes of hypnotic analogue synth builds with such inevitability that you barely notice how simple the song actually is. Penultimate song “Bring It Back” achieves the same in reverse, the stepped up tempo and howls from Grip holding onto the listener with such force that they become the whole of the track.

A few reviewers have argued that this is ASG’s most pop record, and while a greater emphasis on songcraft would seem to support that, it may ultimately have more to do with how drenched in analogue electronics the songs are. Even in their saltier moments like the vocal climax of “Mag 7”, Side Grinder keep things inviting, enveloping themselves in a layer of reverb and noodly synths that occasionally touch on Manzarek-style psychedelia. It proves to be a remarkably effective cloaking device, masking the raw undercurrent of the record and providing a sonic push-pull the band clearly recognize and play off of. Indeed, on “Wolf Hour”, their collaboration with Swedish indie mainstay Henric de la Cour the band pits their ever-poised guest against the barest performance on the whole record. The results are telling, with De la Cour sounding ever more confident in contrast to Grip’s menacing growl. Agent Side Grinder thrive on that sort of friction, when the group elects to let a more relaxed side take over as on the Kraftwerk pastiche “Rip Me”, things feel forced; they just don’t seem to take well to playing nice.

For a band that seems fond of citing their forebearers, one particularly relevant name seems to be missing from ASG’s pantheon: Clock DVA. Much like that band’s material pre-Buried Dreams, Hardware is all about the reversal of expectations, the organic becoming machine-like and the synthetic melting into more elemental forms. The tension between the meeting of the two is where the album’s energy comes from, oneside is rarely allowed to take over without being subtly undercut by the other. It makes for an impressive balancing act on record, and is the sign of an act who are arriving at a real understanding of the potential of the forms they trade in. Without losing any of their spunkiness to refinement, Agent Side Grinder are rapidly evolving, and the results are as casually listenable they are worthy of deeper analysis; a reconciliation of as many dichotomies (false and otherwise) – post-punk and industrial, natural and mechanical – as you’d care to name.