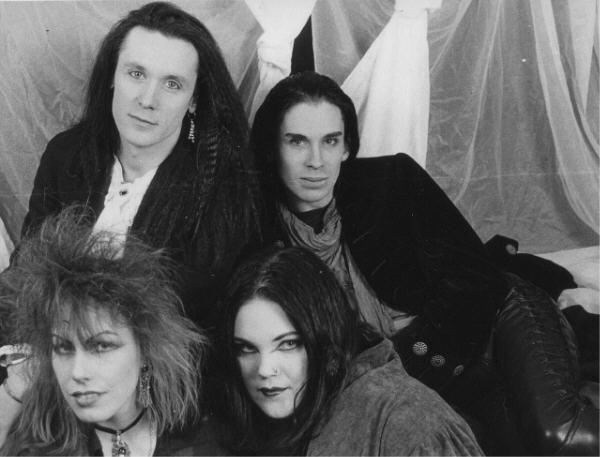 Welcome to yet another installment of The Unquiet Grave, the column in which I pretend to be way older than I am, dish out history lessons on classic goth bands, and lament that they just don’t make ’em like they used to, dadgummit. Today’s lecture is on Nottingham’s Die Laughing, so take out some parchment and a #2 kohl pencil, and try to learn something before all that Aqua Net soaks into your scalp and rots yr brains.

The first incarnation of Die Laughing emerged in the mid 80s out of the ashes of punk band Vital Stance. Despite gigging regularly and recording several demos, this iteration of the band only ever released one song officially (“Wake”) on a compilation (Underground Resistance) which has disappeared so far down the memory hole that there isn’t even an entry for it on discogs.com. Eeep. Suffice it to say, the material from this era of the band lies beyond the reach of yr dedicated correspondent and will have to be left to the reader’s imagination.

The band split in 1988 after vocalist Alison Turner’s departure, and Die Laughing might have been completely lost to history had guitarist (and sole member of both the original and “classic” line-ups) John Berry not met up with singer Rachel Speight and decided to resurrect the name. 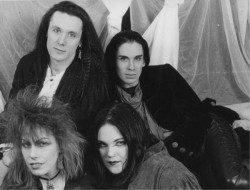 After two demos, 1992’s Poems Of Your Life…. and 1993’s Love Amongst The Ruins (which would be publicly released on the Cage compilation in 1997), and a self released EP (Nemesis), Die Laughing finally released their proper debut, the bombastic 1995 mini-LP Glamour And Suicide. It clocks at a mere 33 minutes, but Glamour packs a wallop. While not being the most refined release, it delivers an unbeatable head-rush of elements: echoing drum machines (which might be mixed a tad loud, just sayin’), careening, enveloping guitar leads and simple but evocative synths. Things come together in a perfect maelstrom on the title track and “Harlequin”. 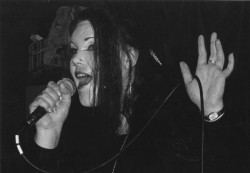 Throughout all of Die Laughing’s work, Rachel’s vocals would remain the central focus, and deservedly so. Although she has a formidable presence and range (and despite the bombast of Glamour), Rachel’s work with Die Laughing always seemed to communicate a sense of demure restraint, which lent itself to the band’s more graceful flourishes. Much was hinted at, without needing to be yelped out. If Anne-Marie Hurst was goth’s banshee, then Rachel was its psychopomp or will o’ the wisp, always pointing towards the inner landscape.

1996 sophomore LP Heaven In Decline offered a more textured showcase for her voice, which “Hypocrisy” and “Masquerade” from Glamour had hinted at. It’s a subtler and, for my money, far stronger LP than Glamour. It also featured some older material; a rerecording of “Nemesis”, a take on the title track from their Love Amongst The Ruins demo, and the stone-classic “Safe Little World”, which had already been released on one of Uncle Mick’s wonderfully curated Gothic Rock compilations.

1997 saw the release of the “Queen of Swords” 7″ and the The Temptress EP, which supplemented “Queen Of Swords” with some acoustic and live cuts. In 1998 Cleopatra released Incarnations, a retrospective for the US market, which does a solid enough job of covering the bases in my estimation.

That would prove to be all she wrote for Die Laughing, who split in 1999. Finding hard copies of their releases is just about impossible, especially for those of us on this side of the pond, but thankfully Heaven In Decline and Incarnations have both been released digitally. Incarnations is fine for a starting point, but I can’t recommend Heaven highly enough as a measured and sustained bit of classic goth rock.

Where are they now? John Berry’s got a new outfit, In Isolation, who are working in a bit more of an indie vein, and Rachel lends her vocal talents to the trad-goth juggernaut that is Pretentious, Moi?, whom you’ll know I can’t really shut up about once I get going.