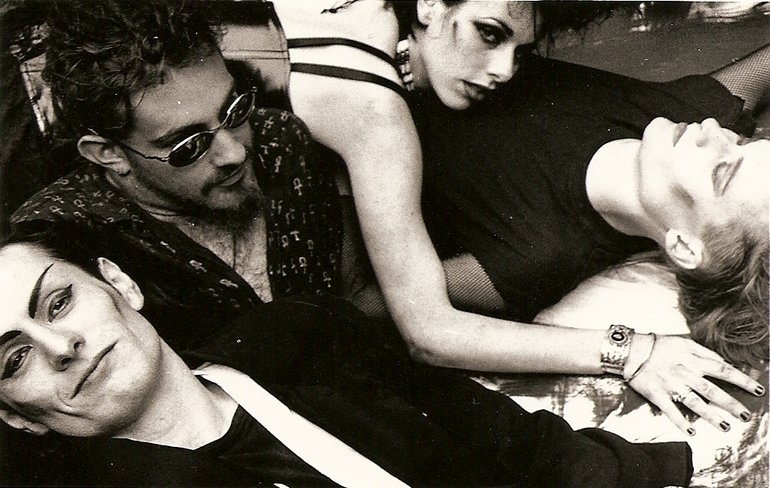 We’ve just hit the summer solstice and goths everywhere (especially California) are no doubt spontaneously combusting into clove smoke and melting into puddles of mopey goo as a result of record heats. But we look after our own here at ID:UD, and so in an effort to offer some cooling succour to our comrades in sable, we offer up another installment of The Unquiet Grave, that elusive column which takes up the history and discography of unabashed and often overlooked goth rock bands. This time out, we’re look at the glamtastic gloom of The Horatii. 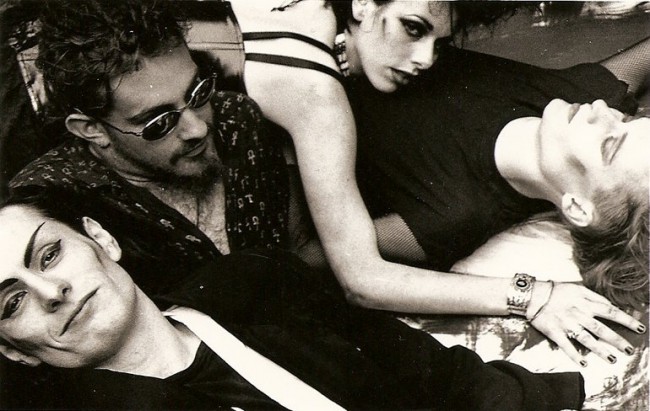 The second wave of goth rock was already well underway by the time The Horatii assembled in Leicester in 1990. The mononymous crew of Eddie and Sarah on guitar, Tim on bass, and Roo on vocals (no given name for the token drum machine seems to have survived the ravages of time, sadly) were fairly well-versed in the sounds of the day by the time they got down to business. Their 1991 self-titled debut demo shows some promise, with a good feel for the balance between swirling and chugging guitars – “Once More & Again” is a solid burner of the Rosetta Stone ilk – but few of the tunes do much to distinguish the band from innumerable others of the era. Apart from stone-cold stunning opener “Annaline” (more on that later), the sparse funk of “Lessons To Be” is really the only tune that takes musical gambles or breaks from goth-by-numbers.

Things are running in a much livelier direction three years later on the Insect demo tape (Sarah’s taking a breather on this one but would be back for the LP proper). A far more dynamic set of speeds, sounds, and moods are kicking about with a sparky vitality which often conveyed a cheeky sense of (gasp) humour, wordplay, and general absurdism, as on the deconstructed robo-groove of “Highway Road”, which is an inch away from being a paranoid Shriekback B-side. Connections to Sex Gang Children could perhaps be drawn here, but far more importantly, Roo’s beginning to develop the personality as a vocalist which would serve the band so well. Alternately arch and deadly serious, he’s able to flip between the defensive and attack mode in “Eyes For Infamy” and the fractured observations and self-diagnosis of “Insect”.

When it came time to release a full LP a year later, The Horatii consolidated their strengths, pulling six tracks from the demos and appending only three new ones to Riposte. “That’s My Girl” and “Eyes For Infamy” get richer and more resonant mixes and arrangements, while others, like “Eddie’s Legs”, are nearly indistinguishable from their demo versions. The version of “Annaline” here actually is the demo version. Arguably the most directly gothy tune to appear on either of their LPs, it’s chockablock with drippy darkwave keys, choral vocals, and images of “a hundred thousand sinners hanging from the chandeliers”. It is, in short, goth as all fuck, and remains fantastic. But it gains much of its power from its distinction from the lighter and zippier fare which makes up much of the record. Yes, there’s the straightforward paean of “That’s My Girl”, but Riposte is mostly marked by the kooky camp drama a la “A Rose In My Flies” and the full-bore commitment given to a tune about a piscine messiah on “Body Of The Fish” (though they wouldn’t be the first goth act to do a scaly piss-take). The best of the new tunes, “Darrel & Alicia” splits the difference, portraying restless indecision concerning two suitorettes. Connecting goth to its roots in glam and reveling in theatricality for its own sake, Riposte remains a screwball goth classic.

The four years between Riposte and 1999’s Succour Punch (again with the punnery) yielded a plethora of changes for the band. The glammy tendencies were brought to the fore, and rather than the scattershot lyrical concerns of earlier records, we get tunes which pick up particular themes or metaphors: toxic relationship as drug substitute (“Heroin Lite”), deceit as cardplaying (“I Hate”), pool party chaos (“She Bikini”). Despite these conceits, a shift away from pure goth towards glam, punk, Wire-style art-pop, and even contemporary Britpop/indie currents often yield a micro-focus on individual songs. It’s an erratic and varied listen, sometimes to a fault, but the execution of the individual songs, the craft that’s gone into each of their aesthetics, is impossible to dismiss. Contemporary reaction seems to have been mixed, with gothy folks latching on to the darker tunes and one or two of whichever of the outliers struck their fancy. For my money, it never quite reaches the heights of Riposte, but has to be admired for its experimentation and crossing of streams.

A goofy rockabilly rave-up cover of 3-D Invisibles’ “Island of Zombie Women” which first surfaced on a Nightbreed comp in 2001 would prove to be the last gasp from the band. Reading between the lines of various whispers scattered around the net, it seems as though there was a drifting away from and then a conscious break from goth as both a scene and aesthetic (hell the difference between Riposte‘s band photo and Succour Punch‘s should have been the writing on the wall). I’ve been unable to track down any post-Horatii biz for any members save Roo, who formed an of-their-time dance-punk act called Zil. They recorded at least two tracks for a video session, but information and tunes beyond that seem to have slipped into a mid-aughts vacuum. They’re not terrible tunes, but neither are they distinct from a lot of similar material which was in the air a decade back.

I understand that cleaving to goth rock can feel like painting yourself into a corner for some folks, but in retrospect I don’t think that concern was merited in The Horatii’s case, if that’s indeed what they were worried about. Both albums have charms aplenty, and are wonderful object listens in the old “goth is what you make it” adage. Sadly, neither is in print, and given the total radio silence concerning the project from former members, it seems unlikely that they’ll be repressed given that they were self-released. Copies are currently going for a little cheaper than they were a few years back on Discogs and eBay, but Riposte will still set you back a pretty penny. Thankfully, the entire discography has made its way onto YouTube (with nary a peep or takedown request in years, knock on wood), so frugal goths interested in tracking one band’s path out of the sometimes repetitive roundabout of the second wave have plenty of fun listening ahead of them. Stay frosty until next time, friends…