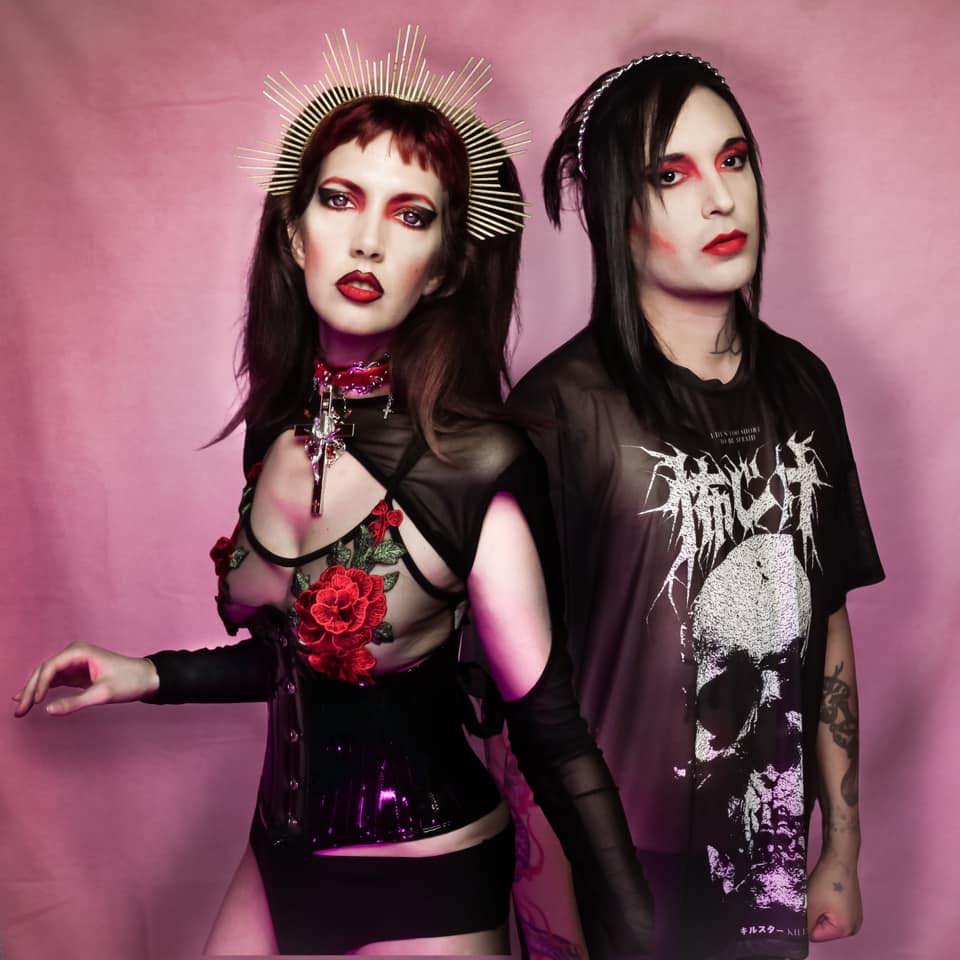 As you may have seen in some recent social media posts, the I Die: You Die 10th anniversary merch is here, and looks fly as fuck. Orders are shipping out next week, so if you got in on these designs while they were offered in the summer, you should be receiving them relatively soon, just in time for the spooky season. We’ve had a lot of questions about whether folks who didn’t get their hands on a preorder, but sadly we only printed enough to meet demand. That said, if enough people want to get one of these designs, we may be convinced to do a reprint. Holler in the comments if you have interest!

Trace Amount + Qual, “Death Match”
The collaborative process between William Maybelline aka QUAL and Brooklyn’s Trace Amount was pretty straightforward, per the liners of their forthcoming collaborative EP Alien Dust; the latter took care of sample manipulation and synth work, while the former programmed the beats and did the vocals. “Death Match” shows how sympatico the two projects are, with the same sort of sickening, woozy aggression of recent Qual fitting perfectly with Trace Amount’s vicious mechanical rhythmics. Up for preorder on BC right now, fans of gnarly school beats should look into it.

Left Spine Down, “The Fall”
The sad passing of Jeremy Inkel did not spell the end of Vancouver’s Left Spine Down; the long-running Vancouver cyberpunk act fronted by Kaine Delay has new music in the form of “The Fall”. The 9 track single features the original version of the cut, b-side “Bithead” plus remixes by Delay and guitarist Matt Girvan and several bonus tracks. “The Fall” itself is vintage LSD, fast beats and synthwork mixed with sample manipulation and plenty of guitar riffage. With their recent return to the stage we will hopefully have more to look forward to in the near future.

Corlyx, “The Echo”
Some candy-coated darkwave via UK duo Corlyx, who’ve been releasing work through NGP for the past year or two. There’s a savvy sense of pop minimalism to the arrangement here, with each element given just enough time in the spotlight and not a moment more, though this really hinges on the vocal performance of Caitlin Stokes, whose pipes might sound familiar through their appearance on ESA material. And whether intentional or not, we’re comfortable enough in ourselves to enjoy the passing similarity to Rod Stewart’s “Young Turks”.

Nghtly, “Dissonanza Cognitiva”
With a couple of tapes on Detriti and another on Clan Destine under their belt, rough and tumble Italian EBM act Nightly are readying another EP on Home Mort. The first sample of it we’re hearing has a stuttering swagger that sounds as much like an engine dying as it does anything else. I staggered mentally, indeed…

Headless Nameless, “Sacrificial (III)”
You may know that Ottawa’s Headless Nameless is a side-project of longtime I Die: You Die favourites Encephalon. What you may not be aware of yet is that HN’s forthcoming LP will come with an entire reworking by Encephalon as a bonus, bringing the project’s dark dirgy rock sound into a more explicitly industrial style. Check this sampling of the style crossover here; “Sacrificial” still highlight Alis’ powerful vocals, but buttresses them with tweaky synthlines, gated pads and snappy percussion. Album drops November 5, via the good folks at Artoffact.

Techno Thriller, “Le Mariage du Ciel de L’Enfer”
Dutch label Strange Therapy have been bringing us great tapes by the likes of ATT Corp and Matriarchy Roots for the past couple of years, but it’s something far less noisy (though perhaps no less sinister) that they have waiting in the wings. Belgian duo Techno Thriller’s extant work ranges from power electronics to minimal synth, but they’re working an imposing but smooth martial neofolk style on this track from the forthcoming Chains tape.