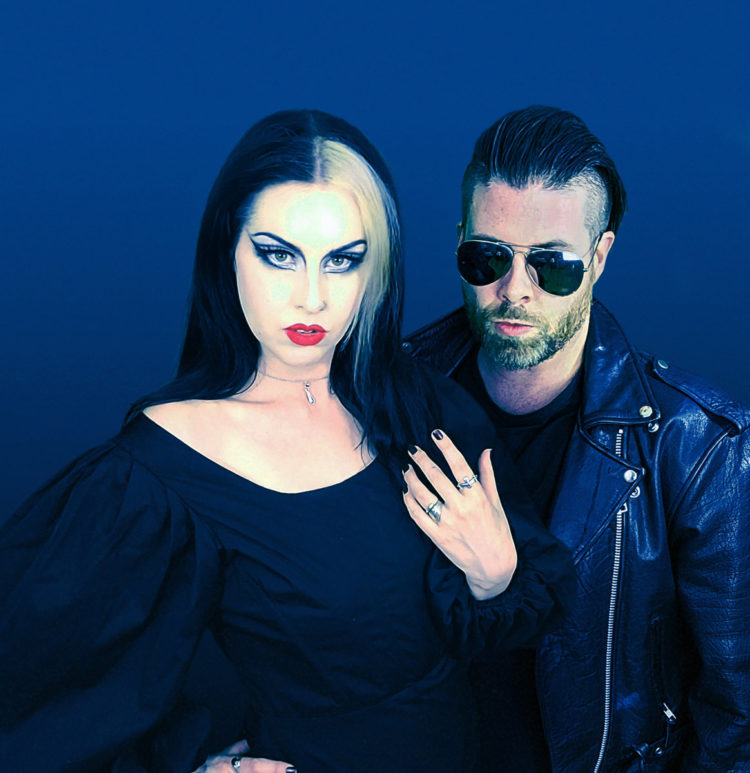 Howdy friends. As you may have noticed, we’ve been operating at half capacity for a few weeks now, but with Alex’s return to Vancouver we are back at full power for the ever-busy fall season. We hope your August was as relaxing as our own, and that you’re as ready for the inevitable deluge of fourth quarter releases as we are. We have our eye on a few big ones (Artoffact in particular has a packed schedule for the next few months), but who knows what the final leg of 2021 might bring?

Contrary to their name, Headless Nameless have both names and heads.

Headless Nameless, “Ash Palace”
Headless Nameless is the newish project of Alis Device and Matt Ghostorm of I Die: You Die faves Encephalon. If you checked out their previous EP Flash in the Dark (which has disappeared from Bandcamp) you’ll have an idea of what the Ottawa duo are up to here; in contrast with the electro-industrial stylings of their main project Headless Nameless revolves around a more dirgey, atmospheric rock sound, and Alis’ powerful vocals. Have a listen to first sampler from the forthcoming album Ominus Spiritus “Ash Palace” for a taste.

Choke Chain, “Losing The Way”
A pair of EPs released in close succession has rapidly made Milwaukee’s Choke Chain one of the most exciting emerging stateside acts. Third EP Invoking Shadows will be out in a couple of weeks and with this number looks to continue the project’s track record of grimy, low-fi EBM scrapers rife with panic and sledgehammer-weighted bass programming. Stay tuned for more detailed coverage of the EP…

Menthüll, “Crypto Love”
Don’t worry, you don’t need to give a fig about blockchain to enjoy this new number from Quebecois cold/darkwavers Menthüll. A fair bit more bass and club oriented than most of the numbers we’ve heard from them, this expands our understanding of what they’re capable of, and continues to raise the stakes for their proper debut. A modern update of “Computer Love”, perhaps?

Noise Unit, “Atrocity Obsession”
When we heard “Body Aktiv”, the first track from the forthcoming Noise Unit LP, we presumed Deviator would be drawing heavily from Rhys Fulber’s recent TBM work, but this new number upends all that. Featuring no less a charismatic vocal presence than Raymond Watts, this careens between modern bass programming, classic industrial rock, and maybe even some hints of goth rock. Noise Unit’s always been a kitchen sink project, and we’re happy that its next phase looks to be just as open-ended as any of its previous ones.

Echoberyl, “Mother Solitude (La Sorciere remix)”
The French scene is absolutely on fire in 2021, with releases spanning the synthpop, minimal wave and body sounds especially. While Echoberyl aren’t a new act per se (the duo have been collaborating since 2018), they definitely seem to be riding the same wave of atmospheric continental electronics as such notables as Hante. and Hammershoi. Check out this tremendous remix of their moody synthpop jam “Mother Solitude”, and be on the lookout for the album dropping soon.

daddybear feat. grabyourface, “Science Fiction”
“Sultry” isn’t generally a word we associate with any of Matt Fanale’s various works, but damn if his new daddybear single “Science Fiction” doesn’t demand that descriptor. Of course a healthy portion of that belongs to guest vocalist grabyourface, whose own work has the dark n’ intimate sound sewed up. But we’re also hearing some interesting moves towards the popular electro-darkwave sound in this production, an interesting move for Fanale, and distinct from his more EBM leaning projects.