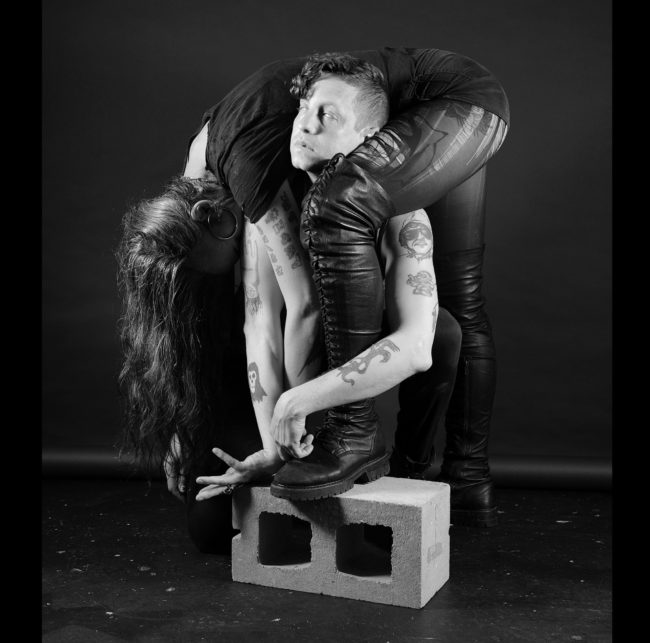 Boy howdy but we are heading into a ridiculously jammed week of shows up here in Vancouver, folks. In the next seven days we have sets from Pod Blots, Spectres, Sigsaly, Rabbit Junk, TSOL, and The Body with Uniform to pick and choose from amidst our usual duties. We don’t generally find ourselves with the sort of “too many nightlife options” laments we imagine our friends in NY and LA are constantly kicking about, but here we are, spoiled for choice. Expect comments on at least some of those shows in the days ahead.

You can run but you can’t etc etc

Zanias, “Endling”
Alison Lewis’ work as Zanias has a strong EBM flavour; many of her tracks under the moniker (both solo and as a part of Keluar with Sid from Schwefelgelb) have been dancefloor staples in our playlists for years. Now despite a move towards a broader darkwave palette on her last full length Into the All, the first taster we’re getting from new EP Extinction feels very much a piece with her earlier material. Makes sense consider it’s somehow her first release on her own Fleisch label, one of the premiere names in new school body music, and also a collab with frequent creative partner Alex Akers of FORCES. Which is all to say that it’s a solid dancefloor banger that has us hyped for the release in full.

Nootropic, “Pod”
We were just saying that the aesthetic of Nootropic’s last stand-alone single would sound nice stretched across a full-length, and now it looks as though we’re getting just that…or at least an EP with a handful of mixes. The slow build of “Pod” from sleek minimalism to tweak and bleep heavy electro stormer has class, elegance, and urgency. Dominic Smelt is already showing up strong in the early goings of 2020.

HIDE, “Blockbuster”
Not often we here the duo of Heather Gabel Seth Sher go as traditionally song-based as they do on new covers EP Kill Your Head. The selection of artists they cover makes perfect sense given the duo’s sound; Jesus Lizard matches perfectly with HIDE’s unhinged and disjointed sonics, where Born Against speaks to the politics that have informed their releases. We’re on the record as thinking HIDE are a must-see live act, but have been equally taken by their recorded output, this EP handily adding some dimensionality to our understanding of both aspects of the band.

Restive Plaggona, “Fall And Free, You And Me”
We were all in a flutter a week or so back about the eerie conceptual power electronics of Matriarchy Roots, but there’s more to track from producer Dimitris Doukas. Doukas is releasing material at an intimidating rate, and his primary vehicle, Restiva Plaggona, has a new EP of pinchy and punchy throwback material which points to classic rave tracks as much as it does vintage 90s European electro. Sadness Party is brought to us by Several Minor Promises, the outfit behind other solid releases by the likes of Nigh/T\mare and German Army.

CIERŃ, “The Box”
Some deathrock from Berlin with a distinctly peace/posi punk throwback delivery. This and a couple of the other tracks here trade in mythological imagery, but it’s not too much of a reach to connect that with the decidedly political mission statement the band appends to their debut demo. Has a pleasantly straightforward delivery with especially solid drumming, and not a small amount of vocal fealty to Anne-Marie Hurst.

Goblin Summoner, “Dig Your Own Grave”
Tip of the cap to Chrome Corpse’s Michael F for the heads up on classically flavoured electro-industrial act Goblin Summoner. Definite Puppy vibes in the vocal style and maybe a little in the bass programming, although we’re just as equally taken by the off-kilter sequences and machine-samples. The North American scene is just swimming in quality new acts looking to the past but interpreting it with new ideas, we’re happy to add one more to our watch list.