What it is, gang? We’ve mentioned it on Facebook and Twitter, but we can now officially announce that we’ll be DJing between bands at the incredibly stacked Terminus Festival in Calgary this June. We actually signed up to spin at the fest several months back before any bands had been announced, and while we were more than happy to do it just to be a part of a new dimension of Canada’s industrial scene, we had no earthly idea just how close to our own tastes and passions the lineup of Terminus would prove to be.

Starting with the one and only Claus Larsen, then adding the people behind our favourite album of 2012, through young Canadian lights like Distorted Memory and Comaduster, to our hometown drinking buddies in Left Spine Down, Stiff Valentine, and Unit 187, our brothers from other mothers in The Gothsicles, to bands we’ve become chummy with online like XP8 and Dead When I Found Her, to our beloved Haujobb, and finally surprising everyone with the left field selection of Icelandic powerlords Legend, it’s been a non-stop montage of us high-fiving each other and sending frantic “Holy crap, Band X just added!!!” texts for the past couple of months. Hell, to get all stats-nerd on you folks for a minute, we’ve done interviews with exactly a third of the bands playing there! The long and the short: we’re super excited to be involved with Terminus, and we hope that folks from around North America lend some serious thought to making the trip over to the prairies. Anyway, enough jibber-jabber, let’s get to Monday’s new tracks!

A Ring Of Thorns, “Out Of Nowhere”
Out of nowhere indeed! I popped on over to Die Laughing’s FB to see what was new with the recently reactivated goth legends and found out that Rachel Speight had started up a new side project. Details are still sketchy, but at least one of the collaborators is Gordon Young, formerly of Dream Disciples, currently of my favourites Pretentious, Moi?, to which Rachel also lends her vocal talents.

Kite, “The Rhythm”
Kite’s IV EP dropped just around the time we started up this here blog, and marked our introduction to the Swedish synthpop wizards. Since then we’ve been lovingly poring over their four numerically titled EPs almost nonstop, so it’s with no small amount of giddiness that we alight upon this, a preview of the “if it ain’t broke don’t fix it”-titled V EP. Am I hearing a somewhat more 90s techno bounce to the underlying beat than usual?

Attrition, “Narcissist”
Attrition have always done a fantastic job of slightly fine-tuning their classy darkwave template with each outing: never sounding stagnant or like opportunistic bandwagon jumpers. No easy feat when you’ve been in the game as long as they have. The first release from the forthcoming The Unraveller of Angels is a by-donation single of the frothy “The Narcissist”, with one club remix and an ambient take included.

Press Gang Metropol, “Fictions”
The French post-punk/post-Corpus Delicti project return after their impressive debut Checkpoint with a new single and video. Bit of a heavier synth presence on this cut which falls into step with the band’s existing sound quite nicely. There’s an EP’s worth of remixes to be had at Bandcamp, including a tropically woozy one from none other than Haujobb!

Corvx de Timor, “Always Rain”
Ben Arp’s latest single is some super smooth and atmospheric stuff that is sitting just right with me as Vancouver struggles through another month of grey. Available free/by-donation from Automation Records as part of their ongoing digital single series.

MEND, “Gunfight”
We close out this week’s Tracks with some classically skittery and breaky IDM from Chicago’s MEND, apparently an outtake from the ongoing sessions for their debut LP. Listening to MEND always makes me want to either pick up a new science fiction novel or do a whole mess of housework. Take that for what it’s worth, but do check Kassi and Max’s solid EP if you haven’t already. 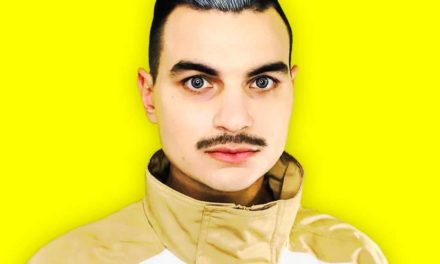