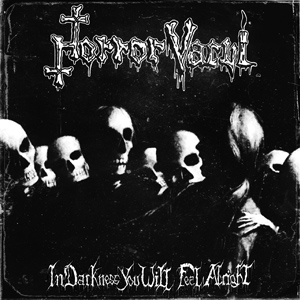 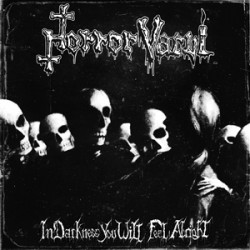 While we haven’t had much time to delve into it on this site, there’s been plenty of exciting new deathrock doing the rounds which, fan though I am of deathrock fashion, is thankfully bereft of the hollow backcombing and and fishnettery of Tragic Black and Death Cult’s tuneless style parading. Instead, much like the fecund influx of goth-tinged sounds in the Bay Area post-hardcore scene about ten years back, there’s been a slew of bands with hardcore, crust, and black metal roots exploring deathrock’s gloomy crypts. Recently formed Italian act Horror Vacui show that this isn’t just a stateside phenomenon. Across their nine-track debut LP the five-piece strike a balance between classic So-Cal deathrock and the more morose end of second-wave goth which took hold in Europe.

Given their tenures in hardcore and crust bands it’s easy to tell that Horror Vacui’s affinity for the raw end of deathrock has been come by honestly, as on the churning “Arabian Skies” or the tense “Yersinia” with its tight drum-fill breakdowns. “I Like It When A Soldier Dies” has much of the spirit and some of the same loping, punky guitar as Dance With Me, the first TSOL album, though vocalist ‘The Sheriff”s straight-up vamp vocals could never be mistaken for Jack Grisham’s unhinged Long Beach yelp. As for that track’s hair-raising title and subject matter (replete with the classic call to “fight war, not wars”), well, that’s crust for you, and if crust is dedicated to the relentless indictment of government corruption, then it’s easy to imagine how growing up in Berlusconi’s Italy could ratchet up the stakes for the angry young poor rather quickly.

It’s not all funeral home squats and shotgunning snakebite on In Darkness, though: Horror Vacui weave in plenty of more elegant dimensions of European goth rock in the LP’s short run-time. As I mentioned earlier, I’m hearing touches of fellow Italians Burning Gates, but you’ll probably just as easily be able to pick out half a dozen of yr own favourite leather-clad trad-goths. The building vocal melodies of “Everything” are classic goth, as are the more stormy wails on standout track “Corvus Corax”. I notice I’m talking a lot about the vocals, which are indeed excellent and are Horror Vacui’s most immediate weapon, though the drums are doing a lot of work under the surface, buttressing up the winding guitar and bass with far punchier fills than one usually encounters in stuff which should hold no small appeal for the dreamiest of goths.

In Darkness You Will Feel Alright‘s album art and the band’s thumbnail description probably gave you all you need to determine whether or not Horror Vacui might be up yr alley right at the outset of this review, and so the only real question is that of quality. In that case, this release clicks along with flair and panache, never wears out its welcome, and offers no small amount of solid tunes while managing to stay swirly and spiky, often at the same time. Grab the Aqua-net, light a clove, and smash the state.

In Darkness You Will Feel Alright is pre-ordered on CD and is forthcoming on vinyl and digital release from AVANT! Records.