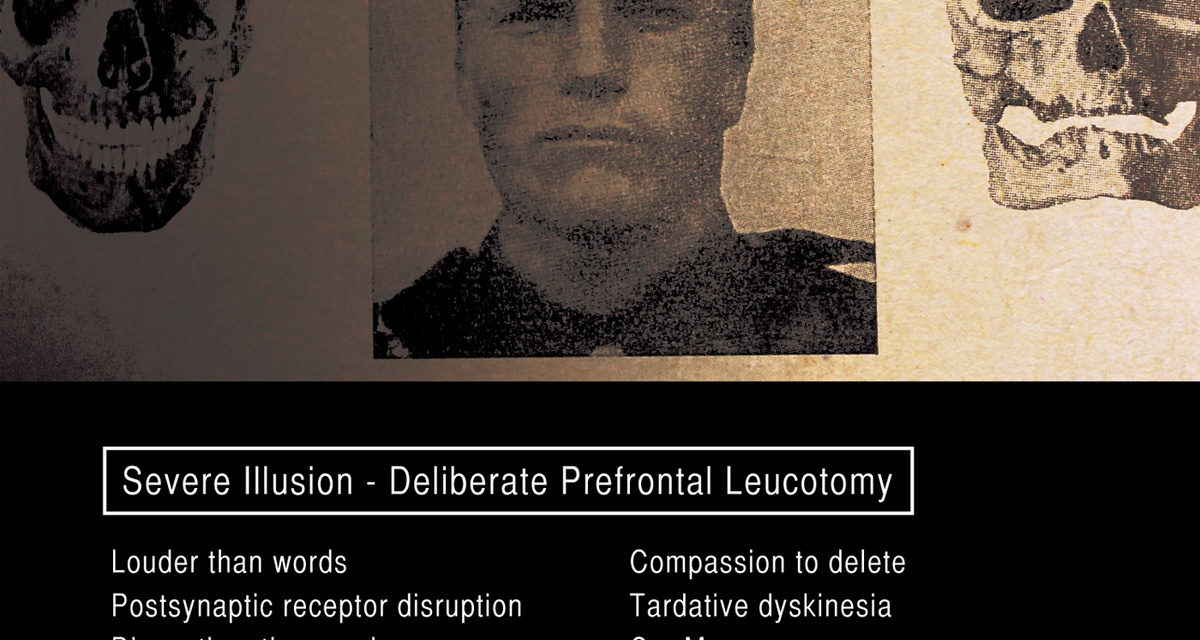 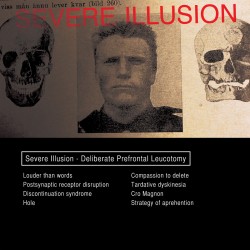 Discovering the work of Sweden’s Severe Illusion remains one of the biggest perks I might never have received were I not committed to this here blogamawhatsit. The band’s immediate and unblinking aesthetic, Klinik-esque cold and grinding dark electro overlaid with the sort of uber-bitter social satire that’s near indistinguishable from tragedy, was full formed and on display when I came across 2011’s No More Alive Than You Deserve. Since then their back catalog has become a key part of the bleaker component of my musical diet, and I’m happy to report that their latest salvo, Deliberate Prefontal Leucotomy, delivers a concise and cask-strength iteration of everything the act does well.

On this outing, in addition to their characteristic sardonic cynicism (this image from the Shortcut To Civilization liner notes communicates far more about Severe Illusion’s ethos than I could ever write), there’s a conceptual framework guiding Fredrik Djurfeldt, Ulf Lundbladand, and Mikael Enkvist’s caustic misanthropy. Accomplishments of Leopold II was meant to be a record of some of colonialism’s most heinous (yet currently overlooked) crimes, and on this, the follow-up to last year’s Psychosurgery, another form of structural violence is being slotted under the microscope: the most extreme abuses committed in the name of psychiatry. Inspired by Djurfeldt’s experiences working within the mental health sector, it’s the sort of theme tailor-made for industrial culture: the perverse inversion of an ostensibly humanist and progressive goal (as some Canadians once put it, kill to cure). It sounds as though there’s more work to be done in this territory; word has it SI will be following this release up with The Legacy of António Caetano de Abreu Freire Egas Moniz (ie, the man credited with developing lobotomization).

Musically, Deliberate Prefontal Leucotomy feels like a tighter continuation of No More Alive; it puts the same core elements on display (basslines, static-blasted percussion, and distortion-heavy vocals), but renders them slightly sharper. There’s far more scraping hiss and feedback and less bounce to be found here, handily connoting the surgical implements of the practices under critique. “Postsynaptic Receptor Disruption” has a simple murky bassline, but is swaddled in so much clanging and screeching that listening to it is akin to rubbing a cat the wrong way. That unease continues through the majority of the record, with only the slightest concessions to more immediate pleasures: “Hole” has some classic dark electro swing and thump with a darkly ominous synth-flute lead that sounds like vintage :wumpscut:, and is definitely dancefloor ready.

Rolling in and out at just over thirty minutes, Deliberate Prefontal Leucotomy feels like an ideal missive from Severe Illusion’s austere climes: it gets newcomers up to speed on their sound and thematics without wearing out its welcome (this sort of stuff should feel oppressive, but not wearying), and for my money it’s not too hard to see an affinity between Deliberate Prefontal Leucotomy and the much-hyped renaissance of older and grimy styles of industrial happening on this side of the Pacific. On the flip side, committed fans (like myself) won’t have any problem cuing it up twice in a row for an extra helping of invasive treatment. Recommended.

Buy it on CD or vinyl, or digitally.