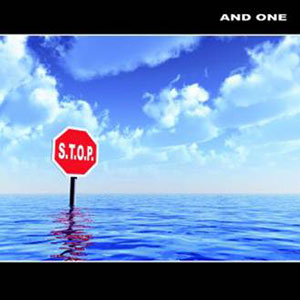 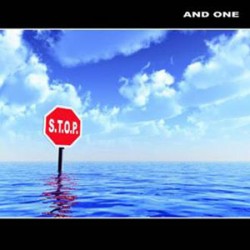 And One
S.T.O.P.
Synthetic Symphony

It feels like I’ve been talking about it forever, this new And One record. Well, to be more accurate it’s been approximately a year, and the discussion has mostly been centered around its potential: the departure of Gio Van Oli and Chris Ruiz from the long-running synthpop group and the reinduction of Rick Schah and Joke Jay, along with new member Nico Wieditz, held some promise for a band whose previous record (2011’s Tanzomat) felt stale by and large. After all, Schah and Jay were members of And One through a run of albums that includes classics like I.S.T. and Virgin Superstar, not to mention a couple of stone classic reinterpretations for the likes of Project Pitchfork and Cleen. With my hopes buoyed by two pretty great pre-release singles, S.T.O.P.‘s promise felt considerable.

So how is the LP on arrival? Well, at the risk of being completely indelicate, the aforementioned singles “Back Home” and “Shouts of Joy” are the best things on it. That’s not necessarily disappointing in and of itself; both songs are massive slabs of catchy clubbable electropop, examples of how well Naghavi and company can make over-the-top work for them when they want to. “Shouts of Joy” is the latest in a long line of Depeche Mode pastiches that also points to some of And One’s own earlier material in it’s use of metallic percussion sounds, while “Back Home” appears in a version with synth-horns and enough added orchestration for your average Bond theme. They’re fun songs, and given that most people won’t have bothered to pick them up as singles you can’t count their inclusion against the rest of the album. They’re highlights, plain and simple.

With that understanding, the rest of S.T.O.P. is okay, if not spectacular. I’ve come to expect a sizeable number of mid-tempo ballads from an And One record, in fact if we’re to believe the Naghavi’s Selection 97-03 compilation released last year actually reflects Steve’s perception of his own material, it seems fair to assume he would be pretty happy to keep writing retreads of “Sometimes” until he retires. It would certainly explain why we get songs like “The 4”, “You Without a Me” and “The End of Your Life”, which are serviceable, if undistinguished. “Killing the Mercy” is the only one that really sticks, trading in the journeyman romanticisms for some of the quirky menace of the bands early years.

For my money the best new song on the whole record is “S.T.O.P. the Sun”, an uptempo number that features a synthetic approximation of a Peter Hook bass lead and a surprisingly emotive performance from Naghavi, who for better or worse often comes across as a bit insincere in his delivery. Whether that’s a product of his notoriously petulant public persona or not, it’s really nice to hear him sound like he’s invested something of himself into his work. “Memory” and “Don’t Get Me Wrong” could both have used some of that, they’re both close to being good but are sandbagged by Steve’s apparent disinterest in them (“Don’t Get Me Wrong” is pretty decent remix single material for what that’s worth).

Stacked up against the most obvious points of comparison (Tanzomat, and Pakt’s Berlin, which you may recall we weren’t wild about) S.T.O.P. measures up alright. There’s no outright stinkers or overly boring tracks on it, and it moves along at a fair enough clip in spite of the preponderance of slower jams. It isn’t a massive shift in the trajectory of And One’s career, but taken on its own terms it provides a reasonable amount of enjoyment. If that sounds like I’m damning it with faint praise, it’s because I am; it wasn’t so long ago they were delivering better than “just alright” LPs, and the high points on the record ultimately serve to remind us what they can do, when they make like the worker in their classic logo and put their back into it.