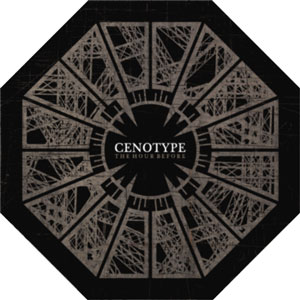 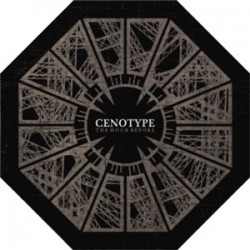 Cenotype
The Hour Before
Industry8

Like any scene, the industrial music landscape is made up of fans: from the folks listening to music and attending clubs on up to the artists releasing records. Lenny Bogatch, the man behind one man-project Cenotype, is the literal case in point, a guy who cut his teeth as a fan and a DJ before ever releasing a note of his own music. His new EP The Hour Before shows it: a mixture of bleak mechanical textures, rhythmic, noise and arcane sample-work which depicts the artist behind it as a devotee of the genre with a desire to draw from its various regions in his own work.

My own (admittedly limited exposure) to Cenotype previous to The Hour Before had me pegging them as a power noise act. While that’s certainly not entirely false, the first third of the EP falls well outside that boundary. Opener “The Beauty of Night” is completely devoid of any beats, instead revolving around an angelic choral sound and distant samples, seated in a rippling pool of dark ambiance. Percussion appears on the following track “3 a.m.”, but in an undistorted and arhythmic fashion: the sounds that cut through its synthesized strings are mechanical, but seem all the more alien divorced from the meter of machines.

That emphasis on build continues through “Submerged Agression” subtly enough that when the EP does transition into rhythmic noise on “Let the Blade Speak” it seems the most natural thing in the world, which makes the push into the chaotic “Nubian” even more interesting: Bogatch isn’t just going from point a (quiet) to point b (loud), it feels like he’s travelling through them. It’s a deceptively simple trick of sequencing, but an effective one that builds a little world out of The Hour Before. Indeed, it feels like a complete listening experience before you hit the remixes that make up the final third of the release. I’m more taken with Cervello Elettronico’s tweaky, technofied version of “6×8” than I am with either of the other two mixes (by Intoner and VinylRob respectively), truth be told I actually feel all three play stronger taken outside of the context of the EP as a beginning to end undertaking.

Unfolding like a lotus and inscribed with patterns somewhere between architecture and cthonic writing, the packaging of The Hour Before is as much a part of the experience as the music. It hearkens back to the inscrutable uniformity of the early Ant Zen releases (aided in no small part by the design contributed by AZ label boss S.Alt) and the embossed Hands packages, with a hint of the sort of ultra-limited art project releases that the dark ambient scene so frequently trades in. It serves as further evidence of Bogatch’s attitude as a creator; it’s not always just about the music, it’s also about our relationship with the album as a kind of limited-edition totem of our chosen scene. And ultimately that’s what puts the whole thing over the top for me; I like the music on The Hour Before, but I love owning it as a physical release. It’s what I want from an industrial record in 2012, something that is sonically pleasing but also a physical artifact of Our Thing. Heartily recommended.