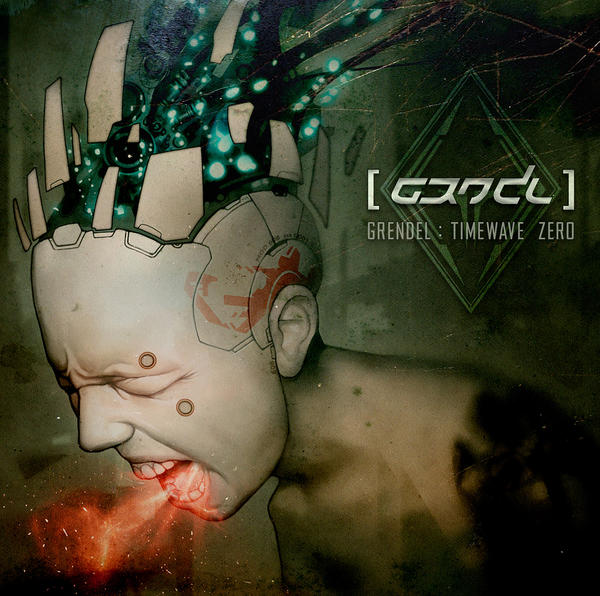 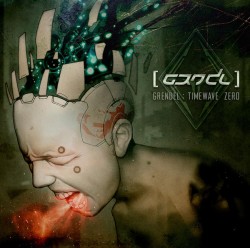 As has been discussed on this site a couple of times, Grendel have never really clicked with me (as opposed to Alex, who’s been on them since day one). Their earlier records’ flat production left me dry, and while their mid-period stuff nudged the values up a tad and began to show some strong choruses, the heavily distorted vocals and scraping leads sounded like countless other acts, and what strengths were shown weren’t sufficient to differentiate them from the rest of the pack in the mid-oughts aggrotech sweepstakes (I feel like Marge Simpson: “Do kids still use that word? Aggrotech?”). That said, enough folks whose opinions I respected spoke of them highly that I always suspected there was something to them which I wasn’t hearing, beyond their obvious ability to write club bangers which could be punched into any prime time set with ease. That changed for me with the recent Chemicals & Circuitry EP, whose use of a variety of vocal styles and immaculate production catapulted some well-crafted songs into heavy rotation with me. This convoluted history put me in the odd position of being rather excited about an LP by a band who’d never released one I’d liked. Now, after a quick blast of pre-release “it’s really fucking good” hype from Grendel associates in the know, Timewave Zero is here, and, well, I’ll be goddamned if it isn’t, in fact, really fucking good. Now free of early miscues and buoyed by deep production and a great clutch of songs, Grendel have released one of the strongest albums of 2012.

Before discussing tracks in particular, it bears mentioning at the outset that Timewave Zero is slick. Super slick. Marco from Decoded Feedback’s pomade slick. I’ve already seen some copy heralding the record as a big leap forward for harsh electro or aggrotech, but those tags, while applicable to certain periods in Grendel’s past, don’t hold up here. The squelchy, sliding leads which are to be found just about everywhere in electronic dance music nowadays are here in spades, but never irritate, always knowing when to yield the floor to deeper programming or rhythms. Speaking of rhythm, the “weld a three note galloping bassline to each beat as though your life depended on it” trope common to pretty much every dark electro track with even the slightest eye to the dancefloor is on full display here, but it too never insists upon itself, and is always ready to drop out for a dramatic fill or fade into the background while more rich and florid elements take over.

In fact, Timewave Zero opens with one such rich and bombastic move, the fanfare of “Rise” which speaks both to the record’s orchestral ambitions as well as its revolutionary theme (plus tossing in some pitch bending vintage synth sounds which connote nothing if not classic science fiction film scores). While “dark electro band makes record with apocalyptic touches” ain’t exactly five o’clock news, Grendel have at least done their homework; the term “timewave zero” refers to Terrence McKenna’s eschatological idea of human technology advancing the interconnectedness of all things, harmonizing in a waveform flowing towards the universe’s terminal point (perhaps buttressing Ken MacLeod’s quip that the Singularity is “the Rapture for nerds”).

In any case, things get right down to business after the palate cleanser of “Rise”. Timewave Zero rarely dips below 135 BPM until the final outro track, and aims just about all eight of its primary tracks straight at the floor. “Conflict Instigation” is a finely crafted banger, which makes up for what it lacks in originality with masterful arrangements and builds, and the title track expands upon the more cyber direction “Chemicals & Circuitry” pointed to. It also shamelessly jacks the vocal melody of Leaether Strip’s immortal “Strap Me Down”, but Grendel head honcho VLRK’s already done well by Claus via a solid cover of “Don’t Tame Your Soul“, so at least you know it’s coming from a place of admiration. We’ve already talked about “Out Of My Mind” a bit here, and it ticks along just perfectly. The danger with “Out Of My Mind” (and really it’s the danger present in all of Timewave Zero) is that of taking its straight-up four on the floor strengths at face value and not looking beyond them. The programming is wonderfully layered, evocative and fun in ways that tunes this obviously stompy almost never are. I never imagined I’d be enjoying the complexity of a Grendel LP while loafing about on the couch, rather than mercilessly scanning it for club fodder like a scavenger, but hey, here we are.

Timewave Zero isn’t entirely without faults. Lis Van Den Akker of fellow Dutch band Misery’s vocals on “Deep Waters” aren’t bad, but are a tad poppy. Given that the track’s slower and lighter arrangement set it pretty far apart from the rest (and that it’s sandwiched between “Out Of My Mind” and the excellent, pulsing instrumental “Neon City Lights”), it would have helped to have had the odd song out not be subject to accusations of triteness. This is a minor gripe, though, and the instrumentation on the track is just fine. If the record has a major weak spot it’s the inclusion of a 2012 remake of “Chemicals & Circuitry”. I can understand the urge to not want to just slot the original in two years after its release, but the version here doesn’t feel like a fully fledged remake or update, just a remix, and one which weakens the source material (it’s also the only moment on the record where the sliding leads truly wear out their welcome). Builds linger without payoff, and the vocoder effects, used to such great effect elsewhere here, just fall flat.

Minor quibbles aside, though, Timewave Zero is a barnburner at just about every level. I can’t wait to start working this into club sets, and I’m happy to keep poking at its programming through headphone listens. I imagine some die-hard fans of Grendel’s earlier, more unabashedly aggrotech releases are griping about the band’s newly expanded sonic palette, but lord knows that there are still countless bands content to sit stagnant in that style (much to my dismay), and those folks have plenty of records to wallow in if they want. Grendel have stepped their game up in a huge fashion on this outing, and are finally converting some of the last holdouts. It’s nice to have the hype click.