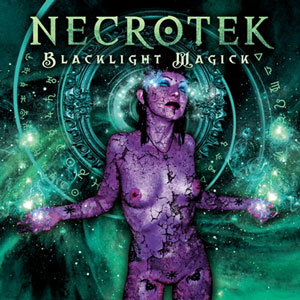 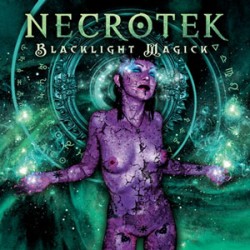 Those who like their electro-industrial old, dark, and relatively free of arpeggios have had much to celebrate in the past year or so, with excellent releases from Dead When I Found Her and By Any Means Necessary with which to glut their maws. Necrotek’s sophomore LP makes a good bid to continue that trend, offering a well-paced, atmospheric listen which borrows from the best of the older generation without ever feeling like a tribute disc, while making some smooth plays for modern dancefloors.

Blacklight Magick dishes out well-rounded and evocative rhythmic synths nested in minimal pads, minimal beats and lightly-distorted vocals. On paper it doesn’t sound like that radical of a formula, but there’s a deft lightness to the arrangements which draws you in and quickly establishes a nuanced and fully realised ethos that walks a fine line between menacing and hypnotic (a delicate balance which isn’t done any favours by the Hot Evil Chick™ art, but I digress). Necrotek’s first LP, 2009’s Menschenfeind had a more scraping, lo-fi take on this sound, and for my money Blacklight Magick is a stronger release for the breathing room it offers. I’ll cop to not having really dug this approach when Necrotek applied it to their Unit:187 mix, but it makes for a fresh and rewarding listen on its own, giving the listener plenty of space to appreciate the wet, well-sculpted sequencing.

As with DWIFH, BAMN, and any other record making moves towards anything resembling “old-school” electro-industrial, the question of The Kevins crops up on Blacklight Magick. There are definite marks of Puppyism – “Haunted” owes a lot to Remission, and the same “I summon thee creature of darkness” sample from Prison used on “Hexonxonx” appears elsewhere – but I think a more apt comparison is the sparse moodiness of Doubting Thomas (with a healthy dollop of yelworC) than the claustrophobic headfucks of classic SP. Speaking of samples, there are a metric ton to be found here, but they tie in nicely with the occult/vintage horror aesthetic Necrotek’s been draped in from the start (mainmain James Geist previously worked in a similarly left-handed vein releasing dark ambient/ritual material as Nitrous Flesh).

Blacklight Magick isn’t all ghoulish atmospherics, though. Tracks like “Cemetery Sound” and “Satanas Ex Machina” weave tasteful modern beats into the mix without any shameful pandering, and remind me of Cervello Elettronico’s recent stuff. It’s no surprise that the more modern feeling tracks receive the most remix treatment. The Revolution State mix of the title cut does a good job of rejigging it while maintaining the LP’s overall mood, while the Portion Control mix of the same shows it to be well suited to their snarly, yobbish EBM punch.

If you put the remixes aside, the record has a short-running time, with an intro, five “regular” tracks and two longer ambient pieces to close it out clocking in at 41 minutes. While this means it doesn’t wear out its welcome, I wouldn’t have minded maybe one more original cut. That said, most of the tracks hold up well after multiple listens, and I found myself re-cuing a few (especially “Cemetery Sound”), at the end of each go-through. If that ain’t an endorsement… 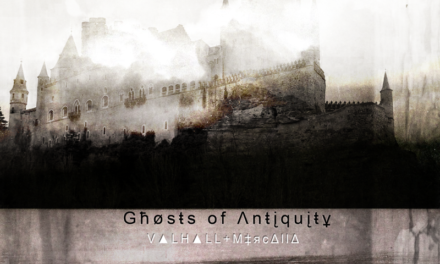