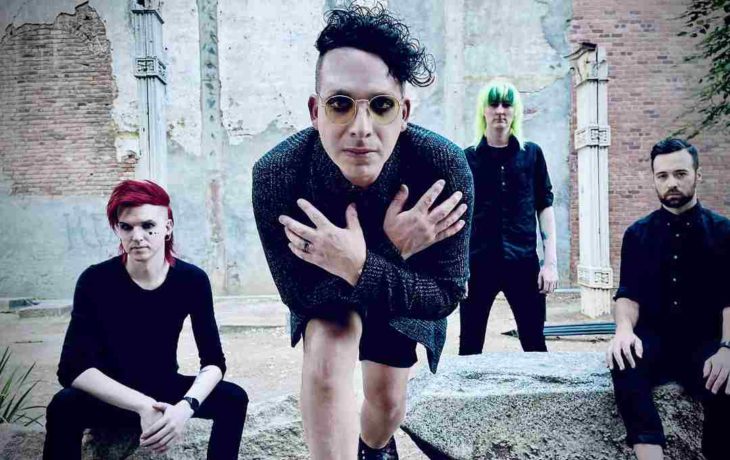 We thought last week’s podcast episode would be a fun enough lark, but it seems to have really resonated with folks. Thanks to everyone who chimed in and offered their own thoughts and reads on the industrial (or not) qualities of just about everything on god’s green earth. We might take up the mantle of Arbiters of Industrial again sometime in the future, but if that does happen and you come seeking our judgment, please remember that this is a very serious exercise. On with this week’s Tracks!

Creux Lies, “Misunderstanding”
California darkwavers Creux Lies are on the cusp of a breakthrough. Their sound strikes a fine balance; enough classic post-punk to appeal to those who favour the old ways, with plenty of modern programming and production that lets them sit shoulder to shoulder with the current wave of dark-minded acts. New album Goodbye Divine seems poised to bring them to wider acclaim, with debut single “Misunderstanding” highlighting their club appeal and penchant for atmosphere.

Deine Lakaien, “Nightfall”
German darkwave legends Deine Lakaien impressed us earlier this year with Dual, a record made up of both covers and new tunes inspired by the covers’ source material. The supplementary record Dual + looks to be a clear-cut continuation of that formula, with R.E.M., Pink Floyd, and Devo covers on deck. But it’s tough to tell from where this original tune takes its cue – this is classic Deine Lakaien at their most weirdly elegant.

Curses feat. Cici, “Gina Lollobrigida”
Berlin producers Curses has a solid rep for producing italo and body-tinged new wave and post-punk tracks that don’t skimp on the funk. New single “Gina Lollobrigida” is perhaps a bit more wistful than we’ve come to expect from him, but that doesn’t make it less pleasant to listen to, with solid bass and ghostly melodies provided by guest vocalist Cici. Available now on a remix single with versions by Zero Call and Nabta, it’s a nice bit of shading in a rapidly expanding repertoire of originals and remixes.

World, Interrupted, “Twisted Tale”
Few labels’ batting averages are as high as Detriti’s, even when they get thrown a pitch well out of their wheelhouse. The high gloss, high drama darkwave of brand new Polish duo World, Interrupted is not at all what we’d expect Detriti, but damn if it isn’t immediately arresting and very tight for a band with no previous track record. Should appeal to fans of Black Nail Cabaret.

Weird Candle, “The Oppressor”
In the wake of the success of Wire Spine and Total Chroma, the first project through which we became acquainted with Robert Katerwol, Weird Candle, has been put on the back burner. Still, with those former projects reaching audiences well beyond those of gray-market Vancouver shows, the timing is good for The Alchemist, an archival EP of hitherto unreleased Weird Candle material: tense but squishy numbers like this get across Katerwol and Caleb Blagdon’s mutant synthpunk approach to body music.

Null Device, “Color Me Once”
A few months ago we drew your attention to Draven’s Mixtape, Distortion Productions’ tribute to that 90’s alt CD collection staple The Crow soundtrack. With the full enchilada now released we thought we’d take another moment to highlight one of the project’s finer moments: Wisconsin synthpoppers Null Device taking on the Violent Femmes’ minimal “Color Me Once”. With a dollop of heavy drums and Eric Oehler and Jill Sheridan’s vocals, it’s a maximal makeover that doesn’t sacrifice the spooky feel of the original. While you’re checking that one out you should take few moments to peep Encephalon’s tribute to Nine Inch Nails’ tribute to Joy Division on “Dead Souls”. Fire it up!