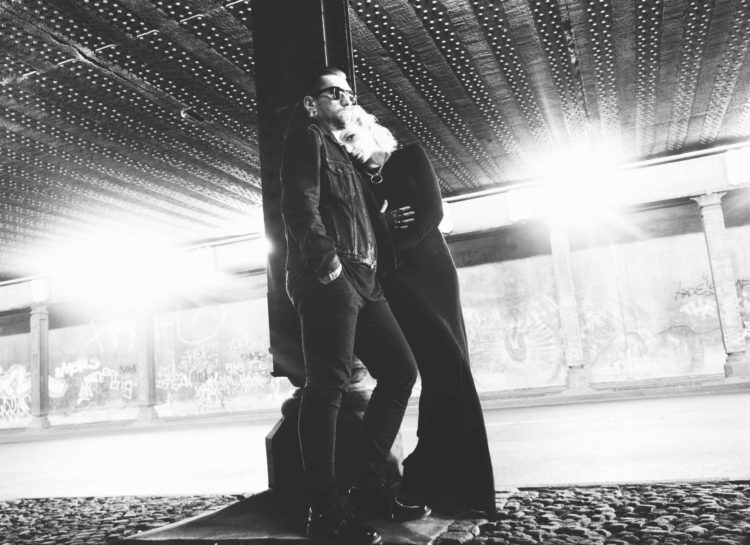 The sweetest season continues, as a regular tidal wave of new releases continues to hit our shores. Why, we’ve still got new hotly anticipated new releases coming from Pixel Grip, Infravision, Bara Hari and Gary Numan in the back half of the month, to be followed by stuff by Ghost Twin and XTR Human right at the beginning of June. Spring is usually a busy time for new music (although for some reason not as busy as the Fall/Early Winter), and while we’re gonna have to step it up a bit to keep up with everything, we’re as always hoping to hear more. Hit us with anything we might be overlooking in the comments!

NNHMN in the parking lot dimension

NNHMN, “Magic Man”
NNHMN drew attention last year with their 2 Deception Island EPs, working that style of disco-darkwave that has been so popular over the last stretch. New release Tomorrow’s Heroine is due July 30th, and the first song from it “Magic Man” has an intriguing spaceyness and disaffection to it, more open and less boxed in than other tracks we’ve heard from them. We expect this will be earmarked for spins in gradually reopening clubs.

Crystal Geometry, Asesinos
Crystal Geometry’s hard-hitting but bright and fluid approach to techno body music should be familiar to regular readers of these pages. New cut “Asesinos” has the depth and energy we’ve come to associate with the project, but more importantly is part of the Inherencia label’s new comp raising funds to combat the human rights abuses currently being orchestrated by the Colombian government. With 19 cuts from across the techno spectrum, there are plenty of new acts to check out while putting some money towards a worthy cause.

Ringfinger, “Floorsong”
Vancouver’s Ringfinger released a couple of solid darkwave singles in 2019, and have been relatively quiet since. We’re pleased to hear them return with the Echoes Fade EP, featuring five new tracks that add a healthy quotient of guitar twang to their ominous electronic sound. Reminiscent of Twin Tribes or Kill Shelter, we’re hoping to catch these hometown folks live once that becomes a thing again.

Black Dahlia, “Killing For Company”
Australian producer Black Dahlia’s already has one absolutely killer release in 2021, Animasochist on X-IMG, which featured the jam “Trixie Mattel”, an absolute techno-EBM monster. Her new release Transmutative Discipline comes to us courtesy of Filmmaker’s Body Musick label, and while it doesn’t depart entirely from the bang and clang of it’s predecessor, there’s some interesting variations afoot. Check out the dark electro style vocals on “Killing For Company” and tell us you you can’t hear a little Zoth Ommog being brought to bear.

Controlled Process, “Salvation Through Erasure”
Montreal’s Controlled Process have just released a much more uptempo EP than we might have expected from the minimal synth act on the basis of their recent Silence And Isolation release. Economic but engaging beats are pressed against still low-fi synths, with some vocals which border on the atmospheric black metal style keeping things cryptic.