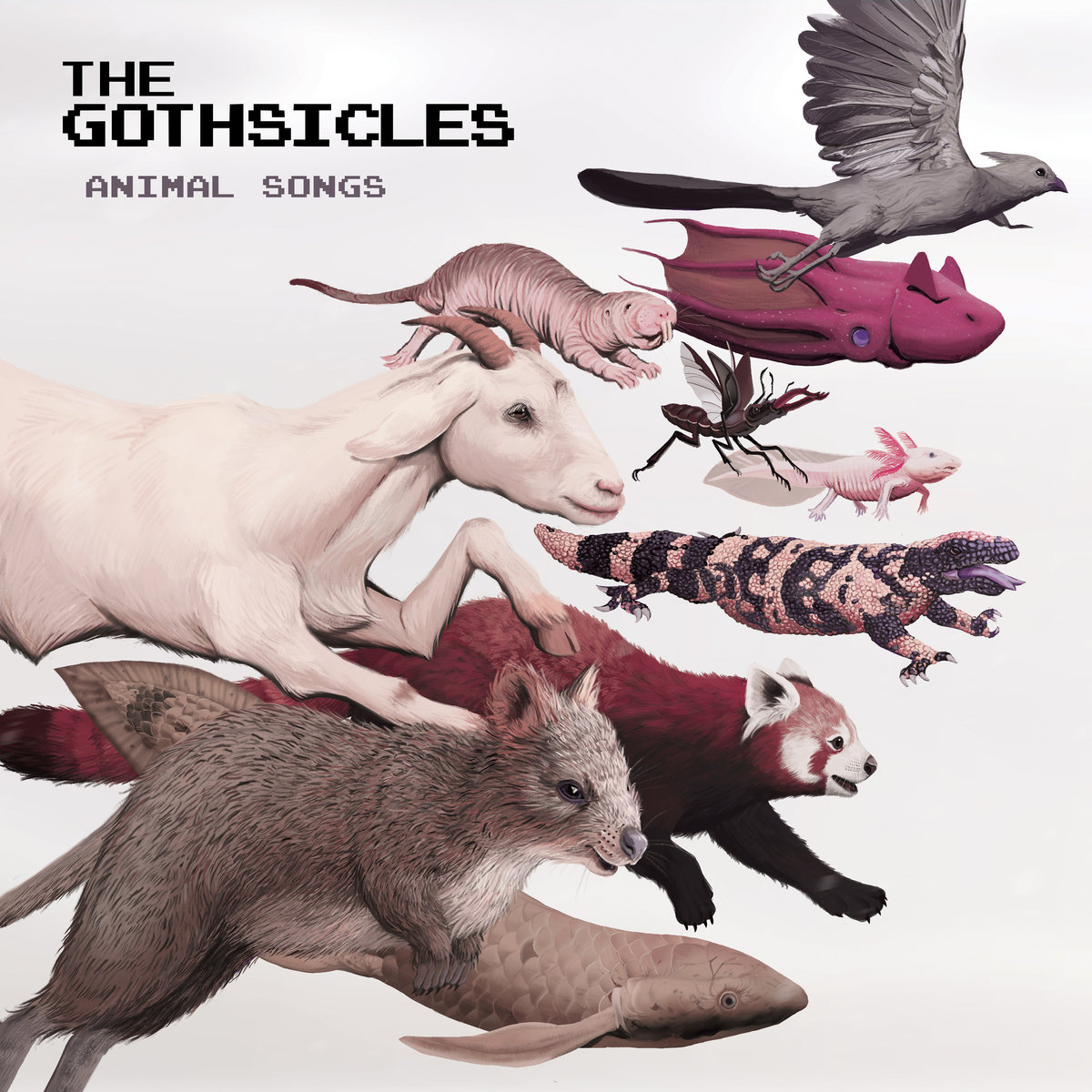 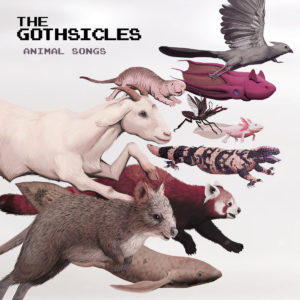 The Gothsicles are a difficult band to parse for those not already familiar with their oeuvre. Musically the ‘Sicles have always been identifiably part of the EBM and synthpop legacy of Our Thing, with the bedroom charm of their earliest compositions giving away to slicker production over time, but it’s Brian Graupner’s lyrical concerns that have often been their most defining feature, his squawking vocal delivery notwithstanding. The literally-titled new album Animal Songs is a bit different though, dropping the dense goth-scene-and-video-games meta-commentary in favour of songs about, well, animals.

The shift in subject matter isn’t entirely surprising; one of the most enduring Gothsicles songs from the last LP was “Straight Up Otter Time” and it was more than a decade ago that Graupner named an instrumental track “It Could Definitely At Least Be Argued That The Whole Video Game Thing Is Getting Kind Of Old”. Still, Graupner sounds particularly enthused here, busting out dense, pun-filled verses packed with animal facts on “Vampire Squid”, “Gila Monster” and “Red Panda Jamboree”. Graupner’s set-up and punchline approach is particularly suited to the slightly left-of-centre creatures addressed; “Never quite authentic / Bodily eccentric” summarizes the titular “Lungfish” about as well as you could expect a couplet to, while “A Coterie of Goats in Trees” offers a wry explanation for the unusual phenomenon it describes.

Musically, Grauper is reaching father than ever before here, and it’s a gambit that pays off. Having founded the more purely industrial Gasoline Invertebrate in the last half-decade, The Gothsicles are now free to explore some of the sounds they’ve been flirting with through their releases in the 2010s. Opener “Rock the Quokka” is instantaneously one of the best Gothsicles songs ever, while scarcely resembling anything in the catalogue – ,

the instrumental is essentially bright, soundtrack ready non-scene electro-pop, and catchy as all get out to boot. For anyone who doesn’t already kind of understand what the project is about it might be a little weird to hear that track or the similarly pop-minded “Go-Away-Bird” given they both feature Graupner’s manic vocalizing (although the latter has a straight pop chorus courtesy of Ellie J), but for fans they’re just extensions of the hooks-and-jokes approach the band has been honing since their debut. Not coincidentally these more varied tracks are the record’s standouts – see the crossover bop of “Axolotl Super Powers” featuring nerdcore icon MC Lars, or the tweaky hyperpop vocal manipulations on the FIRES feature “Naked Mole-Rat (Pink and Furtive)”.

Given the synergy with a lot of modern pop sounds, Animal Songs might be the easiest entry point to The Gothsicles yet released. It still has enough of what endeared the band to us (minus their tremendously energetic live show, although we do look forward to hearing these tracks at your finer scene festivals some time in the future) but shot through with some refreshing shifts in approach. The band aren’t any easier to describe to the uninitiated, but their unique appeal has rarely been so easy to pinpoint. 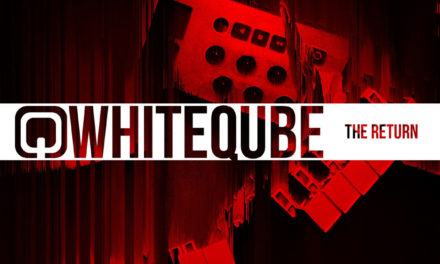