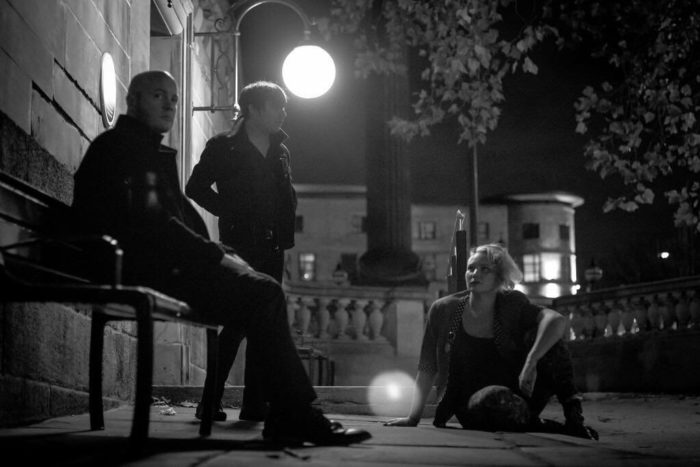 We hope folks enjoyed yesterday’s commentary podcast dealing with Faith And The Muse. It’s been more than six years since we started running these commentaries, and what started off as a somewhat piss-taking endurance test has evolved into a series of projects we take seriously in terms of research and placing records in their historical context. But at a personal level we’ve also come to appreciate them as a means through which we can have our love for classic bands reframed and replenished. Part of our grind here at ID:UD involves constantly keeping on top of what’s brand new in Our Thing, but it’s nice to be regularly reminded of the reasons why we might have first fallen in love with a band so many years ago. Speaking of the new music grind, it’s Monday, and you know what that means!

Double Echo under the light of the moon

Double Echo, “The Bairn”
It’s safe to say that new music from Double Echo is now arriving with big expectations. After years of plying their trade in a range of styles, the low-key triumph of 2019’s Burning In Blue established them as one of the preeminent darkwave acts of the day. Their fifth LP, the audaciously-titled ☾, will be out on Fabrika later this year, and this tune, one of two new singles, shows off their ability to be both dreamy and driving at once.

The Gothsicles, “Stag Beetle Professional Wrestling”
The first Gothsicles record in a half a decade is here, and boy does that feel good to type. If you’ve never had the pleasure, the ‘sicles Brian Graupner has made a career of absurdly catchy party-starting songs that speak both broadly to lifer goth-industrial scene concerns and various pet topics. New album Animal Songs is, you guessed it, about animals. Amongst its various odes to quokkas, squids, lungfish and red pandas you’ll find “Stag Beetle Professional Wrestling”, a clever bit of songwriting that weaves a dense mixture of pro-graps and entomological references into a wordplay-filled whole.

MESHES, “Паразиты (Parasites)”
The bloom is fully off the techno-EBM rose in a lot of ways: there are still plenty of producers out there exploring it in interesting ways, but its safe to say that the initial burst of excitement around it has been dulled by a lot of generic releases in the style. Thankfully some acts like Moscow’s MESHES are finding ways to make the crossover genre feel as fresh as it did in 2016. It probably has to do with the fact that there’s a nice element of crunchy sound design and lo-fi DIY in the project’s sound, as exemplified by the track embedded below from their forthcoming Euphoria EP. A nice breath of fresh air from an act who paradoxically sound like they’re emanating from a bomb-proof bunker in some desert somewhere.

Pyrroline, “Battleground”
Just a couple of weeks after our discussion of old school electro as a loose style, we have a new record from German act Pyrroline, who’ve been trading in it for over a decade. Struggling, their first LP in four years, looks to continue walking the line between classically styled punchy percussion and more sculpted pads and melodies, as this nice groover ably demonstrates.

L, “The End (You and I Belong remix by SRSQ)”
We’ll be honest here; we didn’t peep the debut LP from L when it dropped in 2020. That said, seeing the line-up of remixers the LA based artist lined-up for Discipline Remixed certainly made us sit up and pay attention: you get cuts by RENDERED, Recon, HANTE., Damascus Knives and none other than SRSQ, making her remix debut. From what we’ve been able to ascertain L straddles the industrial and darkwave sounds, which lends itself to a take by Kennedy Ashlyn just perfectly. Another one to add to your BC Friday wishlist.

C/A/T, “Political Angst”
Like plenty of artists, Ben Arp’s allowing recent events to bleed into his music and it doesn’t take much more than a cursory glance at the tracklist for new C/A/T EP Embrace The Void to get a sense of how 2020 treated him. On the musical front, after reactivating C/A/T Arp’s been slowly shuffling in some of the production sounds and styles he explored under other handles during the hiatus, and you can hear some of those draggy and cinematic elements being woven into a classic rhythmic noise template here.