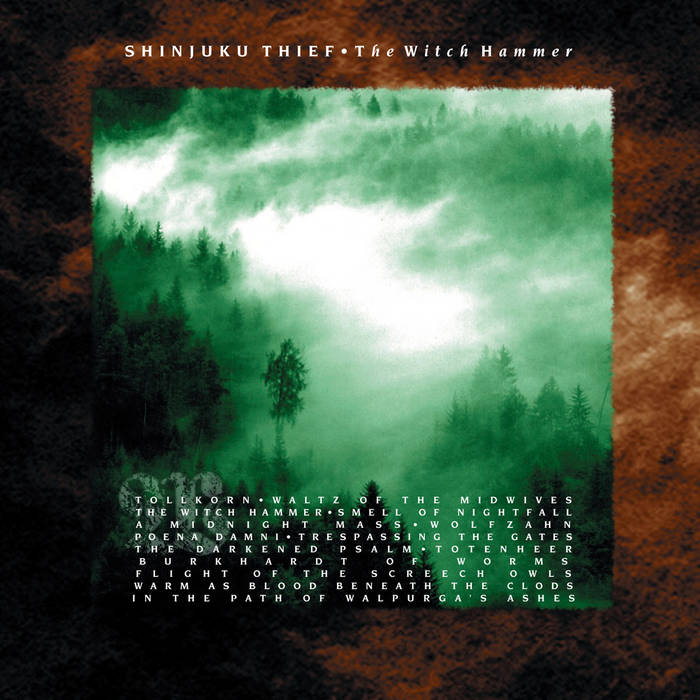 What is it?
Shinjuku Thief began its existence as a trio but the Australian project was quickly whittled down to the sole purview of Darrin Verhagen, who has for nearly thirty years used the ST handle to release an unnerving combination of neo-classical, martial industrial, dark ambient, and noise. Between 1993 and 2002, Verhagen released three LPs under his own Dorobo label which were thematically linked by folklore and myths surrounding witches. After being out of print for years, The Witch Hammer, The Witch Hunter, and The Witch Haven have received their first digital release via Projekt.

What’s on it?
Normally we at I Die: You Die like to use these Replicas pieces to highlight deluxe or expanded reissues of crucial works. While these digital releases offer only the original tracks of all three releases – no more, no less – the reintroduction of such a rich yet uncompromising suite of records is worth celebrating. Verhagen offers a fully-realised wealth of sound design, harmonics, and at times brazen confrontation.

Tracks like “Wolfzahn” get The Witch Hammer‘s ethos across: brisk and tense string and drum sections are given counterpoint via placeless rattling and guttural groans. The result is not unlike an uneasy marriage between classic In The Nursery bombast and the grand guignol excess of early In Slaughter Natives, but undercut with a restless and sardonic delivery. A recurring effect across the records is that of snapping out of a particularly resonant or groove-driven track to abruptly begin a new one with a wholly different approach, sending the listener whiplashing through what could have otherwise been a more smoothly delivered experience. While a three-album cycle about witches would seem to promise a dark but unified delivery, Verhagen goes out of his way to disrupt his own flow, making sure that each track on The Witch Hunter, an ostensibly less noisy and more orchestral release than its predecessor, arrives fresh. The Witch Haven is perhaps a more restrained and hermetic release, anticipating Verhagen’s move into pure soundtracking for both film and theatre: “The Gestation Of Elben” offsets its forlorn oboes with someone pounding on a door, and all of its sixteen tracks segue past in a comparatively brief 48 minutes.

Who should buy it?
Heads from back in the day will certainly remember the Shinjuku Thief name and possibly their 23 Skidoo-styled approach to world and breaks, Bloody Tourist, which fit in well with other early 1990s releases on the Extreme label. But the later ST catalog has been sadly overlooked, in no small part due to the relative obscurity of the original releases (to be fair, The Witch Hammer was given a state-side boost via Relic, Projekt’s early iteration of their Archive imprint). Whether you’re a fan of Dom Fernow’s merging of dark ambiance and folk traditions, the longstanding intersection of post-industrial and soundtrack work a la Graeme Ravell, or of classic Cold Meat Industry sturm und drang, you’ll find a wealth of inspiration and enjoyment here.