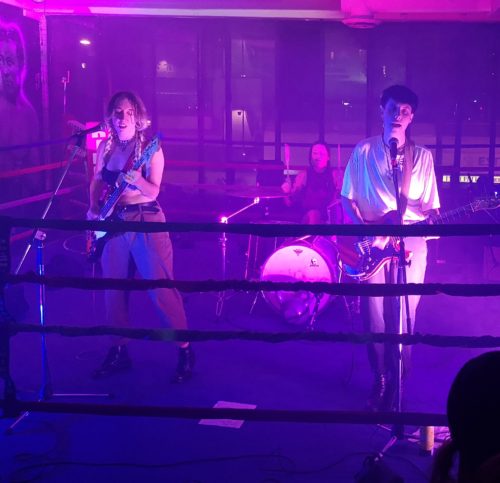 Hot off trips to Chicago and discussions of now-classic dark Vancouver records, it was a weekend of local shows, with Alex checking out sets from our (and everyone else’s) recent discovery Debby Friday, and lié. Longtime readers will know that we’ve long held a great deal of affection for the latter, and we’re sad to learn that this weekend’s gig (held in a boxing ring, no less) looks to be the trio’s last for the forseeable future, with Ash Luk following in so many contemporaries’ footsteps and heading to Berlin to pursue techno success with the Minimal Violence project. It sounds as though there will be a new lié record out in a few months, so if you haven’t yet cottoned on to the band’s aggressive and compelling “coldpunk” style, you’ll have at least one more chance.

Randolph & Mortimer, “Exclude/Divide (Chrome Corpse remix)”
What happens when Sheffield true-schoolers meet Seattle’s hottest underground electro-industrialists? Some fuckin’ dancefloor blue flame emojis, that’s what. Readers of the site should be well familiar with both Randolph & Mortimer and Chrome Corpse by now, two distinct acts who share a passion for classic body music sounds and ideas but present them in fresh and exciting ways. Getting to hear them team-up here (as part of R&M’s new single for “Exclude/Divide”) is a real pleasure. We can’t wait to hear the reciprocal remix at some point down the line.

Body Of Light, “Time To Kill (Cooper Saver Remix)”
Speaking of mixes, Body Of Light not making it across the border for the Vancouver stop of their recent tour with Drab Majesty only whetted our appetite for more of the honed-in synthpop sound featured on Time To Kill, and the duo have obliged…sort of. This mix from LA DJ and producer Cooper Saver retains all of the vocal impact of the original, but cross-hatches it with some throwback house and electro flavour, and somehow manages to underscore the early 90s technicolor melancholy.

Figure Section, “Spectre”
Shouldn’t be surprising to anyone that aufnahme + wiedergabe remain a source of new and exciting darkwave sounds; even this late in the year we’re hearing brand new things from the must-follow multi-genre dark music label. The latest act to be brought to our attention through them is Brussels’ Figure Section who ply a nervy, EBM-inflected darkwave sound. “Spectre” falls neatly into the category of new dark electronic acts who are steeped in the history of synthpop and body music but who push big melodies that nod to classic goth sounds. Good and austere sounds that will have us checking in on this band’s releases going forward.

Ganser, “Buio”
Our favourite “difficult” post-punks, Ganser, look to be taking it a tad easier on us with their forthcoming EP, You Must Be New Here. In comparison to just how tight, frantic, and noisy their past couple of releases have been, a tune like “Buio” practically feels like a coastal holiday with its welcoming harmonies and smooth vocals from Alicia Gaines. Big Winter Severity Index and even The Prids feels from this one.

Bedless Bones, “Limbs Entwined”
Here’s some beat-driven darkwave coming out of Estonia, but don’t worry, it doesn’t skimp on the atmosphere. Kadri Sammel has been part of the longstanding (and slightly more metallic) Forgotten Sunrise for a few years, but her solo project is only now getting a full release. Plenty of dancefloor appeal here, and very much in keeping with our experience of Estonian techno-EBM parties (no, really!).

Shrouded Tongues, “The River”
We generally don’t cover dungeon synth here on ID:UD. It’s not out of any real dislike for the genre, but more out of a lack of knowledge of its vast underground expanses. That said when something like this here song by Portland’s Shrouded Tongues comes across our desk it’s pretty hard not to deny it. Located somewhere between kosmische and the giallo end of synthwave, this one benefits from headphones (gotta hear those stereo effects) and maybe some candles and incense for atmosphere. If you wanted to grab the cassette it’s probably too late by now, but you can still snap up the digital version on Bandcamp.