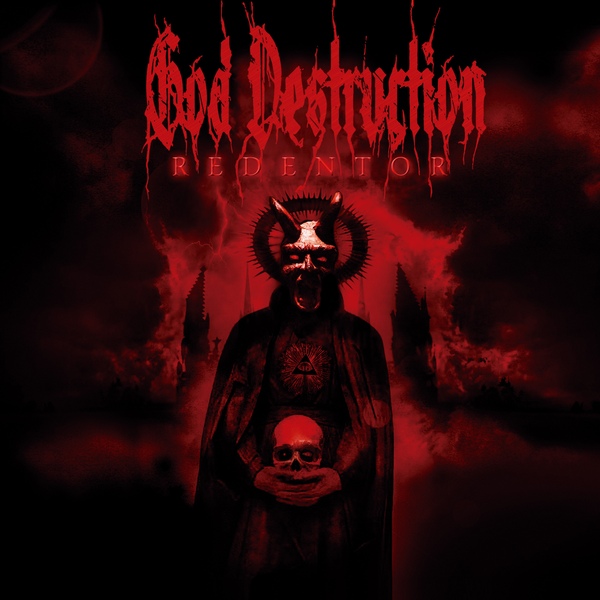 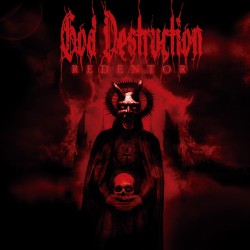 Aggrotech is a tricky sell for me in 2016. Even broadly respected progenitors like Hocico and Tactical Sekt failed to extract much of a response (sorry, I mean “xXxtrakkt [a] rz-pnz”). I can dig the odd band willing to use the genre’s markers as a jump base for wacky exploration, like Die Sektor, and I’m intrigued enough by Dan Barrett’s self-consciously retro Venal Flesh project, but straight-up aggrotech remains a sawtoothed leap too far.

Enter God Destruction. Alex got on board with the Mexico City duo’s debut album Illuminatus which presented itself as aggrotech done through a black metal lens, with all if the anti-Christian trappings which accompany that Scandinavian beast. That pitch intrigued me, and so with third album Redentor just released, I thought I’d see if I could get behind this bastard hybrid of aesthetics.

To my initial chagrin, I found that God Destruction’s investment in black metal was predominantly thematic rather than directly musical. Yeah, you’ve got some organ and a blasphemous liturgy which’d make Father Jack blush (R.I.P.), but the opening title track, with its thumping kick, robo-swarm vocals and acid-stab leads makes it clear that Imperor and Charles Black may have been inspired by the likes of Gaahl and Quothorn, but that their musical cues are far closer to countrymen like Amduscia. If that track manages to at least connote some of the danger and aggression aggrotech was always aiming for, follow up cut “The Machine” reminds of one of its cardinal sin: the wanton abuse of compressors. The woofing gulf between the tune’s kick and the rest of the mix is hopped across so rapidly and frequently I feel like I racked up a few thousand airmiles after just a couple of plays.

“Bullshit” manages to change up the formula with a bit of more groove-heavy beat and some lighter instrumentation in its second half which actually lends the track more punch: when things aren’t entirely bricked into the red, God Destruction are able to reach back and build up some momentum before delivering their attack. These changes aren’t always associated with the metal motifs that the band adorn their compositions in per se; “Thunderthrone” actually musters some drum programming which maybe isn’t too far from black metal, but on the whole when sampled guitars appear they’re chopped and welded to beats which are often down-the-pipe aggrotech. Again, the black metal influence seems to be more spiritual than sonic; given that we’re talking about a harsh electro band obsessed with attacking Christianity, the question of whether “Ratzinger” is a loving tribute to Rudy or a condemnation of the former pontiff.

The fun that can be had from the conviction of God Destruction’s shtick and the little flourishes of guitar and organ which add spice to the aggrotech recipe (and I’m not denying that there is any) mostly runs out by Redentor‘s close. Though just eleven tracks long the repetition of choruses pushes the whole affair to the hour mark, and believe me when I say that the sidechaining doesn’t exactly fade into the background on the flip side. God Destruction definitely have a fun and engaging pitch, but I’d like for them to commit more fully to the musical possibilities an actual hybridizing of aggrotech and black metal might bring.