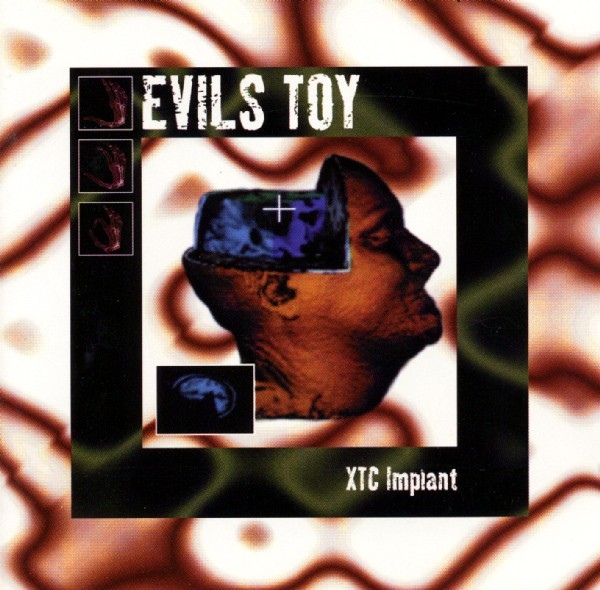 Here’s yet another installment of The Pitch, wherein one of our senior staffers tries to sell the other on the merits of an album they haven’t heard before. In this episode, Alex lobs some lesser known dark electro Bruce’s way. 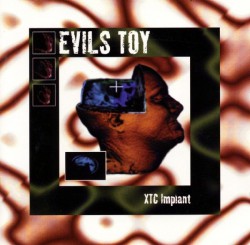 Alex:
I honestly have no clue whether Bruce will enjoy this, the third album by Germany’s Evil’s Toy. At least part of that is my inability to be really impartial about it, I remember these 20 years old songs quite well, and still have a lot of affection for this kind of Teutonic dark electro. Evils Toy were always a bit more silly than say, X Marks or Leaether Strip (“Lucifer’s Garden” anyone?), but time will tend to make that sort of thing more endearingly goofy than obnoxious. A quick revisitation of XTC Implant has revealed some surprisingly solid production and some nice instrumental touches I hadn’t remembered, I’m actually feeling this as an example of solid, chirpy mid-to-late 90s European electro-industrial. Those vocoders! Those digital pads on every track! Those gallopy basslines! God I love this sort of stuff.

Bruce:
I’d have been hard-pressed to really formulate any memories or impressions of Evils Toy before Alex tossed this my way, let alone an informed opinion. I mostly remember thinking that the later dropping of the “Evils” from the name for the rebranded T.O.Y. project to signify a wholesale shift into synthpop was a cute, if rather puzzling move. With that as my only guidepost, I cued up XTC Implant. Was I specifically listening for melodic and bouncy elements which presaged that shift? Yes, and while the speedy arpeggios of “Organics” don’t seem too far off from T.O.Y.’s eventual destination (or the futurepop which was just around the corner), they also weren’t too far off from innumerable contemporary releases on Celtic Circle or Zoth Ommog. In short, XTC Implant finds Evils Toy pretty much dead center in the aesthetics of mid 90s dark electro.

With that established, the specific style Volker Lutz and Thorsten Brenda were working with came into focus. Forma Tadre’s ear for vocal/synth harmonies and :wumpscut:’s yen for well-programmed, chirping leads came to mind, and while I wouldn’t rank XTC Implant alongside Navigator or Bunkertor 7 in terms of landmark scene records, it certainly doesn’t embarrass itself by sitting in the same field as those works. There’s a creepy science fiction vibe to most of the lyrics which carry that frisson of millennial hope and anxiety surrounding technology (Individual Totem’s S.E.T.I. seems a close cousin), and while the lyrics aren’t uniformly excellent they’re delivered well enough and tend to effectively ride the foundation of synth programming.

Speaking of which, no matter how cleanly programmed and arranged the synths on this record are, they still carry a good sense of atmosphere: wet, wormy, and subterranean. It’s because of that texture that I was somewhat disappointed by the regimented speed of pretty much all of XTC Implant‘s cuts. I couldn’t help but think there’d be all sorts of possibilities opened up if at least a few of the tracks didn’t hop over the 120 BPM marker. Hell, the portentous “Victim Of The Sun” could just about have all of its programming remain intact were the tempo to be dropped to a quarter of its speed, and I can’t help but feel that its layers of piano and oddly muted pads would benefit from not being chained to such a rapid clip. Creepy closer “Abnormal Decension” seems to be begging for a beat-free, almost X-Files theme delivery, or at least a more dramatic turn when it begins to weave and layer synths with newfound intensity in the record’s last minute.

A pleasant little time capsule from 1996, XTC Implant recalls a period when techno was being openly integrated into a wide amount of post-industrial releases, and atmosphere and mood rather than direct aggression was the means by which producers sought to distinguish their work from mainstream club fare. I don’t know that this initial tour of their discography’s made me an Evil’s Toy fan, but I love fleshing out my understanding of this period of dark music from a time when I was just beginning to explore it in the most rudimentary ways.