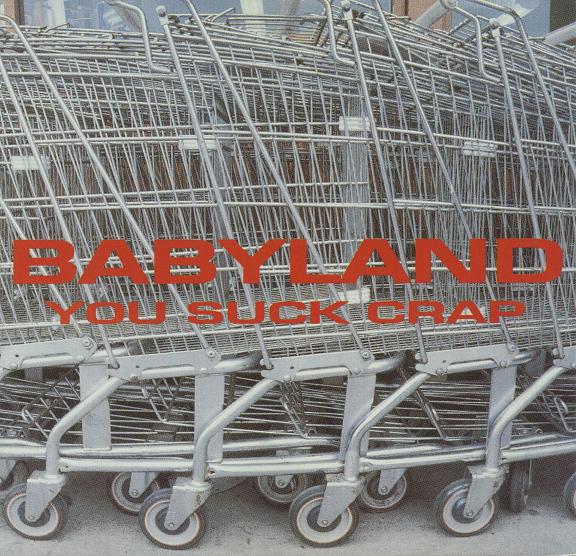 Welcome to another installment of The Pitch, wherein one of our writers tries to sell another on an album they haven’t heard but that they might enjoy. This time out we’re introducing a new contributor to ID:UD, and in turn introducing them to the debut LP from one of industrial’s all-time greatest cult acts… 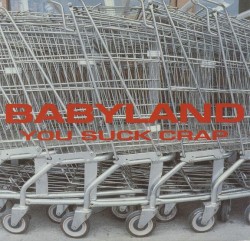 Bruce and Alex: It’s still tough to say if Babyland is going to be one of those Velvet Underground type bands: exclusively acknowledged during their active lifespan by a die-hard cult, with their profound influence on the genres they worked with only coming to a broader light after they’d dissolved. As Dan Gatto moves on with his emotionally-searing classic synth pop project Continues, we’ve had plenty of opportunities to reflect on Babyland’s back catalog, their legendary live shows, and the irrepressible appeal that their mix of hardcore punk ethics and furnace-blasted electronics still holds. It’s within the shadow of that legacy that we wanted to pitch Babyland’s 1992 debut, You Suck Crap, to our friend and new contributor here at ID:UD, Karyn. Not being quite as long in the tooth as the senior staff, Karyn didn’t catch Babyland while they were still a going concern, but we think that her background in hardcore as well as industrial makes lending a fresh pair of ears to You Suck Crap an ideal project with which to introduce her writing. Welcome aboard, Karyn, and what did you think of the LP?

Karyn: Let’s contextualize this. When I queued up the album to listen to, I couldn’t help but notice the 17-minute long closer and immediately assumed there was a hidden track. (Not that I deserve a cookie for that.) When I got to the hidden track, I felt slightly less special. The Different Strokes theme song? The only reason I got the cultural reference is because I know there was a show called that and the super subtle lyrics spell it out. These hallmarks of the past, playing with the CD format and long-dead sitcoms, pull me in different directions. I feel on the cusp of being alienated – the danger of cultural references. In some ways, my relationship to the hidden track is indicative of my relationship to the whole. The intended effect isn’t wholly lost on me, though I feel as though I kind of had to be there, or at least I wish I had been.

I was barely familiar with Babyland before going into this – I’d heard enough to roughly understand what I was getting into, but with no real insight. I’ve been on the periphery of conversations between those who were lucky enough to catch their legendary shows, and those who will kick themselves forever because they weren’t. In essence, only understanding that Babyland was and important to people of certain scenes and ages, I pressed play on “Structure Fall”. Having a human brain with all of its trappings, my first instinct was to pick out what is familiar, to categorize and to better understand through pigeonholing. I could parse the parts, pick out various origins, but as a whole, it eluded me. I was and am hard pressed to think of anything that sounds like this record, which makes it immediately engaging. Somewhere between the unrelenting snare and the noodly lo-fi textures, the first track comes to a close with a shrill repeating note that calls to mind a siren, a warning of things to come. With 15 tracks left, I didn’t know where they were going to take me, but I was assured in classic hardcore shouts that it “just doesn’t matter.”

The origins in hardcore are most easily recognizable in what is traditionally instrumented, namely Dan Gatto’s vocal style, and the fury of Michael Smith’s drumming. Classic hardcore background vocals on tracks like “Motor.Tool.Appliance” and “Traffic” made me genuinely smile and long, again, to have been there. On “Traffic” in particular, the percussion really brings together the visceral qualities of both industrial and hardcore, owing, I assume, to the choice of whatever is moonlighting as a drum kit, and application of hardcore tempo and patterns. It never sounds forced, but like a natural amalgamation of these elements, fitting in well with music from hardcore and industrial music of the time.

To my fresh ears in 2013, it seems like a historical document as well as a well-crafted distillation of diverse points of reference. The third track exemplifies how well the otherwise disparate elements work together. “The Advance” begins with a serious bass groove beneath the lo-fi synth skittering, giving way to the now-familiar classic hardcore-style vocals and a more menacing, insistent beat. Then ominous pads underscore the refrain from Dan Gatto: “the future is now,” in a dystopian post-apocalyptic world where synths are MacGyvered in a dimly-lit bunker. Again, it feels organic rather than contrived: the result of DIY creativity within constraints.

Which brings me to the subject matter which, again, feels raw – anything but contrived. Unadorned by effects or prettiness, Gatto’s delivery belies his sincerity. On track 16, Gatto sings about his “Reality”, of inadequacy and trying to overcome your insecurities when catering to these fears defeats the purpose. But unlike so much self-loathing industrial, I actually believe him. Musically, “Reality” is an excellent summation of the album’s musical references. With bass lines that would sound perfect in a classic EBM or hardcore song, and synth horns that somehow make the song sound kind of fun and ominous at the same time, this is one of the more accessible tracks.

If I was unsure how this would play out, certainly by the end I had a gist. You Suck Crap occupies its own space outside of the genres it borrows from, which is perhaps why their “electronic junk punk” label continues to resonate. What makes it even more applicable is the consistency with which Smith and Gatto approach their distinct style, even while seemingly deviating from it – for instance, the perfect amount of vocal processing at the beginning of “Smrow-Toh”. This consistency is kind of remarkable when I consider that this was their first full-length release. More honest and emotional than much of the industrial of the era, and more challenging and innovative than much of the hardcore, You Suck Crap evades the Venn diagram my hopelessly analytical mind wants to place on top of it.

When something is dated, it’s worn out its welcome. It can be because of a trendy aesthetic having gone out of style, or maybe it contains now-irrelevant cultural references. “You Suck Crap” isn’t dated. It’s still sonically vital to my ears, and I feel its influences are immediately identifiable, so I can place it in a continuum. The specificity of techniques and sounds not merely coming from certain genres, but particular eras within those genres, which is why, again, though it isn’t dated, it is definitely of its time – a time that can’t help but I romanticize, to some extent. I was more interested in Barney than Babyland. This doesn’t help with the whole being-born-too-late curse, but it’s pretty rad anyway.

You Suck Crap is currently out of print, though it can be bought in mp3 form on iTunes and Amazon.