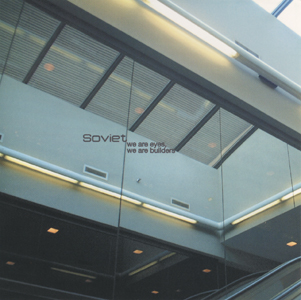 Welcome to another installment of The Pitch, wherein one of our senior staff members tries to sell the other on an album they haven’t heard. This time, Bruce digs up a bit of classic synthpop from well outside the industrial/synthpop continuum, and tries to convince Alex of its self-conscious, melodic charms. 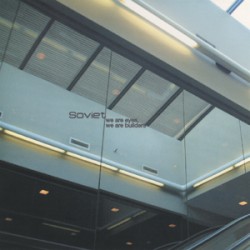 Soviet
We Are Eyes, We Are Builders
Plastiq Music/Head Records

Bruce says: A restrained collection of 808 beats and sugar-coated melodies from awkward New York art school kids, Soviet’s debut LP (and the only one to see a proper release) is as far removed as possible from the huge trance leads and anthemic vocals which were dominating synthpop in Our Thing in 2001. I can’t remember if futurepop had clicked as a term yet at that point, but it was obvious what it was, and it was obvious that Soviet wasn’t it. Maybe that was part of the appeal. Far more suited to house parties than contemporary club floors (though I got plenty of mileage out of “Candy Girl”), We Are Eyes, We Are Builders spoke to a very different relationship with the ur-80s synthpop sources than that expressed by, say, bands on Synthetic Symphony (a full run-down of the differences in synthpop’s legacies in North America and Europe is beyond the scope of this piece, natch).

Confusingly released on two labels simultaneously with differing art and track listings, stumbling over its self-consciousness with Keith Ruggerio at times almost abandoning singing mid-line due to the sheer gaucheness of it all, We Are Eyes, We Are Builders is still a killer record which holds merits well beyond nostalgia value, be it for the 80s or early oughts. There’s the pure “Just Can’t Get Enough” worship of “Candy Girl”, the cool disaffection of “Run-In” and “Breakdown”, and the echoing KO of “Modern Love” (no, not a cover), a faded love letter set to a club beat and blasted from the bottom of a cave. If yr at all a fan of synthpop of any stripe, you should be able to set aside partisan preferences and enjoy We Are Eyes, which is how I’m pitching it to Alex.

Alex says: A long time ago we had a conversation about one the most interesting things Kraftwerk ever proposed; that music is an accessory to your lifestyle, like your clothes, your furniture and so on. So like your accoutrements, the music you listen to has a balance between function and style. It needs to be aesthetically pleasing but also achieve some level of utility (gym music, late-night bus music, dance music) to truly fit into your life. I’m thinking about that assessment while listening to Soviet for a couple of reasons; firstly because like all throwback synthpop acts they owe Ralph, Florian and company an enormous sonic debt, and secondly because although it’s lovely in spots, I have no idea where to shoehorn most of this record into my listening. It’s not bad, but it also fails to transcend the stuff that inspired it.

Now I’m willing to admit that a big part of that may be a personal failing on my part. My taste in classic (read: not touched by goth/EBM/darkwave) synthpop is pretty prosaic, so any subtleties in Soviet’s homage may well be lost on me. I just can’t latch onto most of the songs. It all starts quite promisingly with “Commute”, which has a pleasantly early 2000s feel to it, reminding me of a slowed down version of what electro acts like FPU and Legowelt were up to at the time. They hold onto that feel, all beepy leads and teutonic 70’s drum machine programming for at least the first third of the record, culminating with “Candy Girl”, which as Bruce noted is a cute dancefloor number, as sticky as it is sweet. But after that the record kinda loses me.

The obligation to OMD and Ultravox on the album’s middle portion is visible from space, but Soviet never really rise above aping those acts on songs like “Lonely Days” and “China”. It’s a cheap criticism to say “If I wanted to listen to Band X, I’d listen to them instead of a band that sounds like them”, and I’m perfectly able to listen to someone do a good version of someone else’s sound if the songs are there to prop up the pastiche. But even after a few listens in various contexts (at work, while reading, cooking dinner) I’ve yet to find a toehold amongst the various tracks. Not to paint a picture of myself as some sort of efficacious bore, but while solidly constructed, I just can’t imagine when, and in what capacity I would want to put this on. There’s a certain compulsive listenability that comes as part of pop music’s parcel (see also: earworm), and I just don’t get it from the lion’s share of this record.

Upon some reflection I think there’s a dryness to We Are Eyes, We Are Builders that kind of bugs me. The mix has this very constructed quality to it that I would normally associate with your more intellectual strains of techno, but I’m also talking about the delivery of singer Keith Ruggerio who too often slips into sounding bored rather than removed. Witness his too god damn precious by far “rap” on “Soviet Bot” (although that song’s nods to electro-funk and chorus are a bright spot in the desert of the album’s back half): it’s just hard to get past the affectation of it all.

So yeah, I don’t actively hate this record, but it’s not a homerun for me. I realize that most of my criticisms might seem academic at best (and pedantic at worst), but that’s the thing: your best pop music, synth or otherwise, easily surpasses that kind of hoity-toity nitpicking by being fun to listen/dance/make-out to. I can see working the early songs into my rotation for those activities in some sense, but they wouldn’t be in the top-tier of picks. If I can torture the utility simile a bit more, this album feels like a lower end Ikea coffee table; serviceable, moderately stylish, not without a place in your home but nothing you feel overly attached to. I can see why Bruce likes it, it has a nostalgic quality that I think would appreciate well with age, but at first blush it’s failed to reel me in.