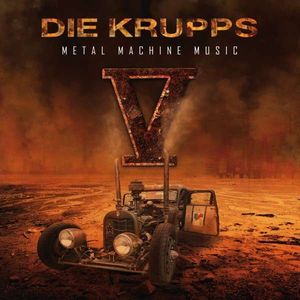 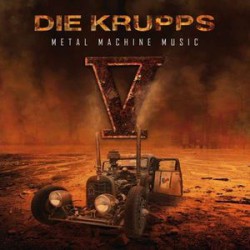 Although Die Krupps’s 2013 LP The Machinists of Joy went a good ways towards reclaiming the group’s often overlooked role in the history of EBM, their metal-influenced 90s output that they’ll be remembered for. Their latest record V – Metal Machine Music is very clearly positioned as a part of that legacy, with the numeral in the title directly referring to the quadrilogy of albums that afforded them some degree of crossover success.

Oddly enough, the album plays out less like a direct return to the sound of those releases, and more like a foray directly into Neue Deutsche Härte, the surprisingly long-lived electronic metal subgenre popularized by Rammstein around the time Die Krupps entered into a twelve year hiatus. Hairs can be split on exactly how new a stylistic diversion this is for them (in this reviewer’s opinion, NDH is more indebted to popular groove metal acts than proper industrial metal), but the results themselves are hard to argue with; DK were already adept at chunky guitar based numbers with lots of portentous synth filigree, the transition to full on electro-chug rock mostly lies in minor production and presentation choices.

“Kaltes Herz” and “Fly Martyrs Fly” are great examples of the aesthetic in action, with blocky guitars dictating mood, tempo, and rhythm, with all other production elements beholden to them. Even in the moments like “The Truth” and “Branded” where the band invoke their penchant for bass programming and elastic tempos, the approach maintains focus on riffs, either by leaving space in the mix for their crashing entrance or by counterpointing them with melody. There are points where they stretch the band’s capacity for the style to breaking (“Kaos Reigns” specifically loses the plot by going too big and too fast) but by and large it works well for them, with Jurgen Engler’s gruff delivery maintaining a distinct link to their own identity against the mechanized wave of shredding.

Interestingly, much of the material on V is actually culled from the band’s own backcatalogue. The most recognizable number to get a facelift is “The Vampire Strikes Back” (a contribution to sleeper industrial rock touchstone Wing Commander: Prophecy soundtrack), but some of the songs like “Road Rage Warrior” and “Volle Kraft Voraus” date back to their early 80s incarnation. It’s not a coincidence that the record’s best and most triumphant moment, “Alive in a Glass Cage”, lifts directly from their 1992 song “Disciples of Discipline”. Contemporary Die Krupps lives and dies by the relevance of their considerable body of work and their own capacity to repurpose it.