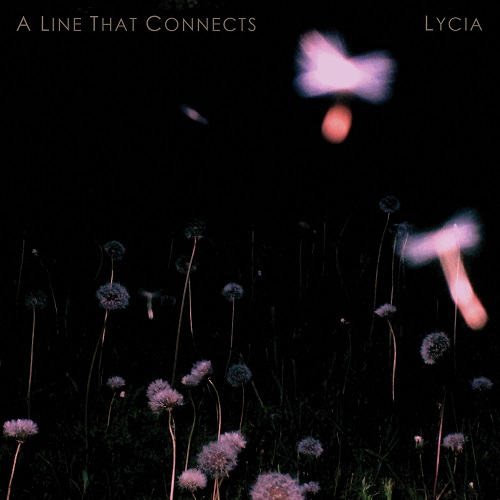 In Conversation is a feature in which the senior staff talk about a record we’ve been listening to. Not exactly a review, it’s pretty much exactly what it says on the tin: two music nerds having a conversation about an album with all the tangential nonsense, philosophical wanking, and hopefully insightful commentary that implies. This time we’re jawing about a stellar album of gothic rock from an act with a lengthy and varied history in the genre… 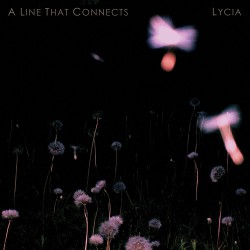 Bruce: Well, it looks as though 2013’s Quiet Moments wasn’t just a blip on the radar. Building on that record’s strong statement of purpose after a lengthy hiatus, Mike VanPortfleet and Tara Vanflower have returned with A Line That Connects, with 90s Lycia member David Galas back in tow as well. Quiet Moments felt to me like a very tightly focused listen with a specific and nuanced sound, and at least initially A Line That Connects seemed to be going in a similar direction. I felt like the first few tracks weren’t too far from Quiet Moments‘ more pensive, um, moments, with some of the electronic patina swapped out for a more echoing, bass guitar forward sound. That perspective was quickly exploded, though, by the huge range of sounds, structures, and moods A Line That Connects showed itself to hold. To state things clearly from the beginning, this is an incredibly expansive record.

I have a lot to say about what’s going on on A Line That Connects, but I’m curious as to where Lycia fits in your musical history. While discussing Quiet Moments I talked about how I was mostly familiar with Lycia’s earliest and noisiest releases, and while there are points on A Line That Connects that speak to that era, it also seems to touch upon just about all of Lycia’s earlier territory as well. In a recent interview VanPortfleet said “Lycia became a serious band the day I became influenced by Lycia”, and I think that provides a good starting point for thinking about this record. What’s your background with Lycia, and how do you see A Line That Connects relating to that?

Alex: Well you know me, I’m hardly an authority on this particular stripe of dark music. I am however fairly conversant in Lycia’s catalogue from say Iona through Estrella, which not coincidentally is almost all the Projekt albums. They always stood out to me in the context of that label. Lycia has what I think of as an otherworldly quality that transcends a lot of the cloying melodrama of their peers, and what’s more, by the time they put out Cold (a first ballot hall of fame 90s goth record in my estimation) they had absolutely mastered how to convey elegance and grandeur in their songs. They’ve had that broody, enveloping listening experience down pat for the better part of their existence, and while I haven’t kept close tabs on them, I’ve also never forgotten how impressively realized Lycia is, which I guess factors into why I was so keen to talk about A Line That Connects. As alluded to in that VanPortfleet quote you brought up, this isn’t just a really good record, but a really good Lycia record, and that makes it something a little different.

So yeah, I’m super into the LP because all the stuff I associate with the band is on full display pretty much from the churning opening of “The Fall Back”. It’s big, it’s bright, it’s glacial. And man, is it moody: just this big slab of feels doled out through these bright chiming guitars and intertwined vocals. I love how it just keeps building from beginning to end, getting more intense and gaining momentum until it climaxes. I guess that’s as good a place as any to start talking about the sonics of the album: what do you make of it structurally? Like me, did you feel like they were deliberately holding back a lot in the early portion of the record so they could floor you in the second half?

Bruce: It definitely unfolds in some incredible ways. I thought I had a handle on its style and approach until “The Rain” delivered an out of nowhere uppercut midway through. For a band that so often gets praised for atmosphere and ambiance above all else, that is an absolutely killer goth rock barnburner. There are plenty of acts (not gonna name any names) who trade exclusively in the sort of sound and structure that “The Rain” points to without ever getting close to a tune that driving or hooky. That it feels almost like an off-the-cuff concession to accessibility makes A Line That Connects even more impressive and ambitious.

But back to your point about structure: in a way this almost feels like a classic double (or triple) album. Not that A Line That Connects sounds anything like these records, but things like Kiss Me, Kiss Me, Kiss Me and Sandinista! come to mind in terms of the completely open, everything and the kitchen sink approach to types of composition. The end result here is a record that feels much longer than its just shy of seventy minute runtime, but in the best way possible. That could go back to that point about being influenced by one’s own past, with attempts being made to touch upon so many of the group’s earlier motifs, but I think the structural variety is even broader than that. A tune like “The Rain” holds the exact structure and length you’d want from it, while others (“Blue”, “Hiraeth”) feel like more ‘traditional’ Lycia tracks with dreamy entrances and exits. Beyond those, though, did you notice how many of the songs here end almost the instant they hit a particular crescendo or turn a certain corner? Both “The Fall Back” and “A Trade Out” seem to recuse themselves the minute they ‘arrive’ at their destination. So often listening to music with ambient qualities is described as a ‘journey’, but its typically a cyclical one. Not so here, with Lycia carrying the listener up into mountainous wilderness, and then abruptly disappearing the second a clearing is reached. It’s an at times disorienting experience, especially with the number of tracks and styles in play.

Alex: Oh for sure, but I feel like that’s all part of some broader plan that speaks to how much of a traditional album listening experience this record affords. I really enjoy individual moments on it a lot, but I don’t think there’s a single song on the record that doesn’t benefit from the context of listening to it in the sequence intended. Take the one-two of “Bright Like Stars” and “The Light Room” for example; the former song lifts you up with this big riffy bassline and this ascending wall of keys, and then the latter zips you back down with these spiraling vocal melodies and guitar parts. It’s solid albumcraft, but it’s also a really clever use of sonic motifs to reinforce one another, songs that give meaning by proximity without being these really literal continuations of one another. And that you can have a dirgy, Swans-esque bit of flagellation like “Illuminate” share room with a lovely bit of clarion goth rock like “Autumn Moon” and have it not just seem congruous, but totally natural? That’s pretty exceptional.

That’s actually a good entry point for another thing I wanted to discuss, especially since you and I have mentioned it to each other a lot in passing: man is this an easy record to listen to from stem to stern. At least a part of that is due to how A Line That Connects ushers you in with a large number of more ethereal numbers before really pouring it on in the back half, but it’s equally about how it preps you for what’s coming up in this really subtle way you don’t notice until these huge transitions are actually upon you. You know the bit on “An Awakening” where the song is suddenly this huge chugging juggernaut, and it seems really natural for that to have happened, in spite of everything before it being this low-key melancholia? It’s an effect achieved through mood and tonal shifts, all happening really naturally but totally deliberately. The record is almost like a Murakami novel, in that it semiotically programs you while you consume it to understand it better and be more immersed in it. Do you know what I mean?

Bruce: Yeah, that’s a pretty solid comparison and speaks to the sort of effect that I feel that a lot of contemporaries of Lycia are often credited with but rarely deliver on. So often what we mean by ‘atmospheric’ is actually ‘aimlessly murky’. A huge amount of effect to be wrought from the listener via dynamics and tempo shifts gets left on the table because dreamy, go-nowhere tracks are easy enough to trot out. That’s not the case here, where both the stylistic whiplash between tracks and more subtle albumcraft moves are really adding a lot of flavour to an album whose sound is almost uniformly ‘dark’.

It’s pretty rare to find a band releasing something close to a complete tour de force nearly thirty years into their career, but over the course of this conversation that’s what I’m beginning to think Lycia have pulled off here. I know we’ve mentioned the band’s hiatus between LPs as if it was continuous, but if you factor in 2010’s Fifth Sun EP alongside Quiet Moments, they’ve been building up a good amount of momentum over the past five years and that comeback really seems to have reached an apotheosis with A Line That Connects. Where do you see this record fitting into the band’s broader discography, and where do you see it and the band itself sitting in the most broad understanding of dark music in 2015?

Alex: It’s hard to know where Lycia is situated right now, mostly because I think the borders of dark music have become really indistinct and hard to map of late. Like, the scene that would have traditionally been the audience for this album is kind of fractured right now, but at the same time it feels like A Line That Connects is getting a lot of attention from outlets that might not have paid much attention in the past. At a time when the relevance of ‘goth’ is measured by whatever the latest suffix we’re sticking in front of it is, it’s nice to see a record that feels very traditionally dressed in black get some love.

So to answer both your questions, I think the best framework to use to assess Lycia is actually themselves, which is really the recurring theme of our conversation about A Line That Connects in retrospect. The LP’s name is really super literal: it’s a record by Lycia about Lycia, a portrait of their career up ’til this point, wending its way purposefully through as many moods and configurations of their sound as possible. I’m really taken with it. It’s as a great example of how a long running act can so fully understand their own appeal that they can not only give long time fans what they want, but also provide new insight into why we liked them in the first place. Terrific stuff, highly recommended.

A Line That Connects is available now.