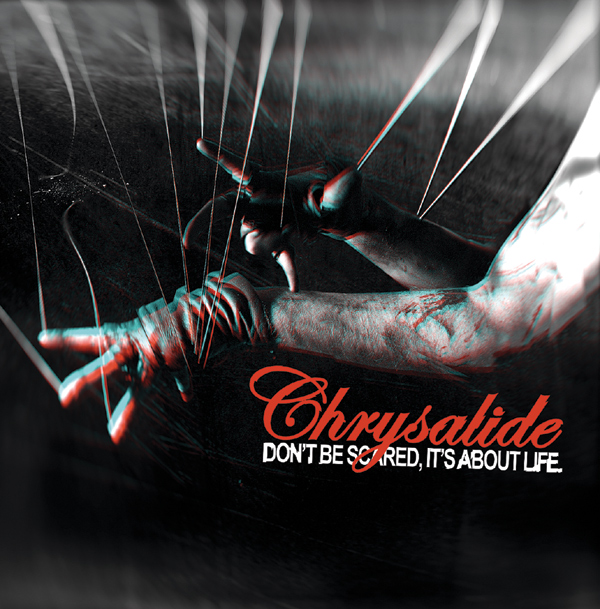 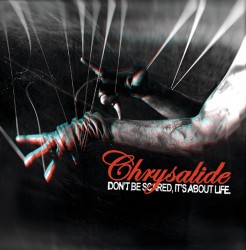 Bruce: There’s just no getting around it. The first thing that has to be talked about is just how ugly and uncomfortable this record sounds. I can’t think of anything made in the past few years with modern industrial elements that’s turned my stomach as much as Don’t Be Scared (some Manufactura releases might be the exception, and Severe Illusion’s cold sardonicism also deserves some mention). I’m accustomed to feeling assaulted like this by noise rock and power electronics, and some classic dark electro can effectively communicate a real feeling of dread and creepiness, but actually conveying a sense of danger and legitimate aggression with the beat-heavy approach Chrysalide takes is a rare thing indeed, and worthy of some extended discussion in and of itself.

I should say that while the heavy distortion and grinding passages that mark much of the record are, I suppose, aggressive and off-putting to those unaccustomed to listening to this sort of thing, I’m far more unsettled by the quickly barked back-and-forth of the two vocalists, and just how quickly tracks begin, are summarily fucked about with, and end. In that sense, I don’t think it’s far off to point to the post-hardcore insanity of acts like The Locust as something of a touchstone. My point is that the violence on display is conveyed through formal means, and while that may sound too arty or prosaic to be legitimately upsetting, consider the embarrassed silence which arises amongst industrial heads in the know when excessively violent imagery and themes are presented without any deviation from now-formulaic genre exercises (I’m looking at you, Agonoize). 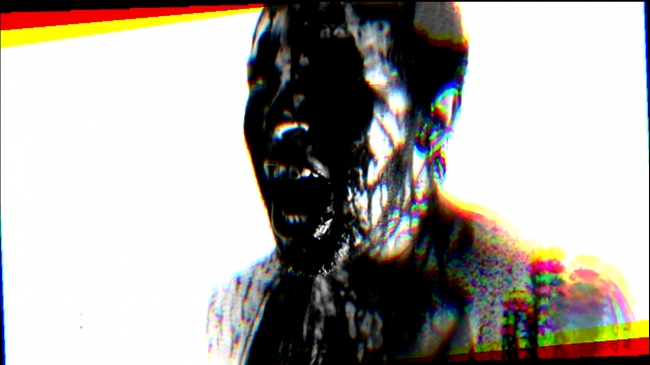 Alex: Indeed, it’s been a dog’s age since I’ve heard a record this acrimonious, and what’s impressive about that feat is how it achieves that in the face of an audience totally inured to being yelled at and assaulted with loud noises and recycled “transgressive” lyrics. Like, I’ve had this album for over a month and there have been times when I literally had to take it off when it came up in the playlist because I couldn’t handle how unsettling it can be. It’s unrelenting, and I don’t mean in terms of just blasting you with beats and screaming (it’s actually pretty dynamic musically), it’s in the misanthropy that rolls off of each cut in waves. Listening to it isn’t and kind of cathartic excercise, I actually find myself getting kind of agitated by it.

That sort of aggressive bitterness can get really wearying and stale if drawn out over a whole album (I’ve often thought it was a good thing NIN’s Broken was an EP instead of a full-length), but Chrysalide keeps it rooted in this very genuine, domestic kind of resentment. This isn’t abstract, post-modern ennui, like the ultra-literal album title says; “It’s about life”. So yeah, as much as I think there’s a definite of cynicism in titling your dense, gritty song “We’ll Talk About This During Dinner”, there’s also a relatability that comes through in it, and that’s kind of fascinating.

Bruce: I’m puzzled by that tension between the album’s ugliness and the appeal of that ugliness’ forthrightness, too. It might just be that “We’ll Talk About This During Dinner” reminded me of Neubauten’s “Z.N.S.” a bit (and how cool is the rhythmic use of a glass being tapped and a throat being cleared in anticipation of a dining table speech?), but this does feel like the sort of record that you could hand to someone almost entirely unfamiliar with industrial in much the same way you could with Halber Mensch or VIVIsectVI. I’m not saying that it’s necessarily as good as those records, but it does feel as though it’s preceded by a historical caesura of sorts, rather than a whole litany of albums newcomers might not be familiar with. If you were to hand our hypothetical newcomer, say, Wintermute, to take a recent record we loved as an example, you’d probably talk to them before or after they listened to it about Necro Facility’s existing debt to Skinny Puppy and how Wintermute was different with regard to it, and maybe play them some Puppy tracks for context. I don’t know that I’d feel the need to give our listener any context or background information on Don’t Be Scared apart from “hey, it’s aggressive electronic music that falls into the general category of industrial”.

What I’m saying is that records are part of an ongoing dialectic, and while it’d be rash to claim that Don’t Be Scared is a completely sui generis work without precedent (I do think that Puppy’s thick, mid-period freakouts are the closest comparison), it really doesn’t fit in with any of the current subgenres and streams within Our Thing, and isn’t relying on a lot of the tropes which we’ve heard and seen countless times. Rather than the catholic embracing of and sampling from preferred influences, it feels as though there’s a more keenly honed, almost auteur-like vision underlying Chrysalide (Vampire Rodents is one of the few other projects in that vein which comes to mind). 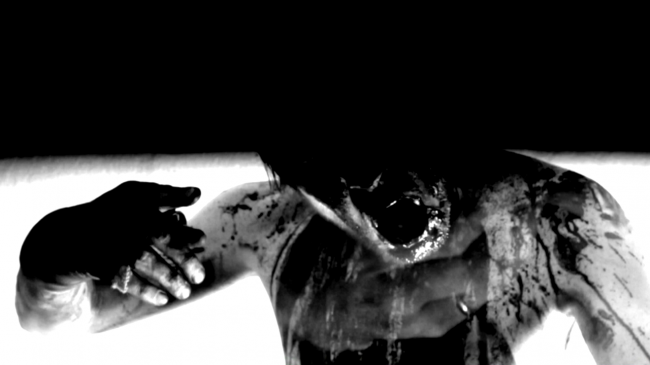 Alex: That’s funny, because it actually makes me think of some of the more outre bits of power noise. That may be just be a result of knowing that Chrysalide’s Arnaud Coeffic also works in that arena as Sonic Area, but it’s stuff like the distorted groove on “Traders Must Die”, or the four-on-the-floor beats on “Give Me Something Stronger” that speak to that tradition. Of course both songs are ornamented with all kinds of weird samples and left-field change-ups that keep them from being pigeon-holed, but I can draw a line between the rhythmic noise tradition and song-based industrial without too much difficulty.

Speaking of “Give Me Something Stronger”, it’s one of the big stand-out songs because of the way it keeps breaking down to this one looping sample that’s just slightly off-kilter and sped up to the point where you almost want it to go back to the punishing beats as a release. It’s a trick they employ a lot, especially with piano type sounds. “I Do Not Divert Eyes” has this mechanical chug that Syco and Arco are having these aneurysm inducing screams over top of, but it’s the rolling keys that really jump out of the mix, partly because they have the expressiveness of an organic instrument, but also because they’ve been given this precise, unnatural treatment in the mix that’s really quite unnerving. The weird little plinking lead on “Cybernetic Babies” works the same way, it’s quantized and cut-off so mercilessly that the tension becomes palpable. I said earlier that listening to Don’t Be Scared isn’t an exercise in cathartic anger, and a big part of that is that it feels like the rage is turned on the songs themselves, like they existed in some form or other and then Chrysalide beat them into the shape they wanted. Which I guess speaks to that auteur idea you had on some level.

I’m still undecided on how I feel about their use of this mid-rangey dubstep wubs on some songs since they seem so wide-spread right now and counter to how decidedly uncommercial and difficult the album is. How did you feel about them?

Bruce: I thought they served as a nice counterpoint to the impenetrability of much of the rest of the record, perhaps giving listeners a familiar reference point in an estranged context. It’s not as though any of the tracks are built around a “sick drop, bro” moment, or anything. That “Cybernetic Babies” lead you mention feels the same way, combining with the clattering, wooden drums and reminding me of a Timbaland beat. As far as wubs themselves are concerned, the mighty Scorn have been proving how they can be used for bowel-shaking, terrifying purposes in an at least vaguely industrial context for years before we all started having to have opinions about dubstep. In short, no harm, no foul.

Come to think of it, the little flourishes like that serve as a nice example of how flexible the record’s sounds prove over its rather lengthy runtime. Despite being “harsh and unrelenting”, to use a cliche, it doesn’t have that suffocating, oppressive sameness which often accompanies that tag. Again, that’s not a bad thing; lots of great records are monolithic, unified pillars of noise and misanthropy. But Don’t Be Scared never sits still and rarely ever repeats itself enough to wear out its welcome or feel long despite being, well, long. While it’s not necessarily as revolutionary or formally deconstructive as Wire’s Pink Flag, I kind of feel a kinship between those records in their “everything and the kitchen sink and never the same trick twice” delivery.

Alex: That is pretty important, especially in the context of how long the album is, especially the expanded version that Artoffact put out. For the purposes of this discussion I tried to stick to the album as it was first released in 2011, which is still 17 tracks deep. And even then, hoo boy, it feels long. It’s 2012, and I can’t think of a single album that’s defined by how lengthy it is, but in the context of the audience’s ability to pick and choose songs and ipod playlists and what have you it’s nice to see a record that really goes for it format-wise. We’re nerds for albumcraft, and Don’t Be Scared trades in that, to the detriment of instant gratification but more of a pay-off when you actually sit and listen to it all the way through.

Speaking of the expanded version, AoF also put together a 2-CD version, which has a bunch of b-sides and remixes on the second disk. The line-up of mixers is short but sweet, ∆AIMON, Encephalon, Dead When I Found Her, I Parasite and Sonic Area. As an aside, I think all the different versions courtesy of the other artists have this very embattled feel to them (with the exception of Sonic Area, who’s already in his wheelhouse so to speak), like they’re struggling to reshape something dense and unyielding, so when they do manage to wrangle them into their own little musical worlds it ends up fitting nicely with the conflict at the heart of the original album. Nice efforts all around.

You know, it’s a shame I didn’t hear this album on release, because I feel like it’s one of the most distinctive things I’ve heard from last year, and like it would have ranked high in our year ends. Ah well, at least the domestic release gives it a bit of a second shot at reaching a broader consciousness within Our Thing, and I really feel like people should hear it. We’ve gotten so used to rage being expressed in really rote, sterile ways, it’s bracing to get it in a way that feels alive and smart and genuinely confrontational. Good record.

Don’t Be Scared, It’s About Life is available from Artoffact in an Expanded and 2-CD version. 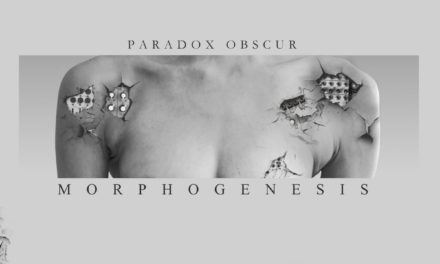