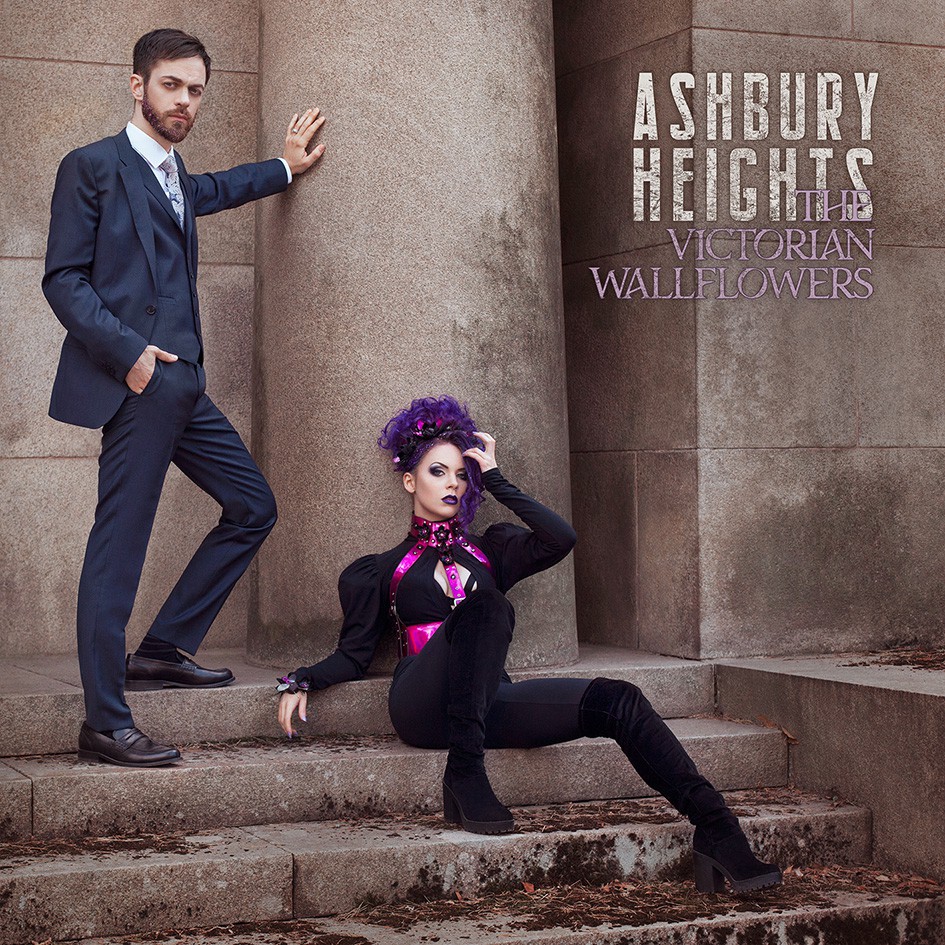 In Conversation is a feature in which the senior staff talk about a record we’ve been listening to. Not exactly a review, it’s pretty much exactly what it says on the tin: two music nerds having a conversation about an album with all the tangential nonsense, wild supposition, and hopefully insightful commentary that implies. This time we check in with one of our perennial favourite Swedish acts… 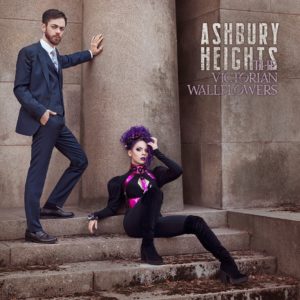 Ashbury Heights
The Victorian Wallflowers
Out of Line

Bruce: Three years on from the languid and gauzy The Looking Glass Society, Anders Hagström and Tea Thimé are back with a record that takes a few cues from that record but, to me, seems like an attempt to go for the pop jugular with more ferocity than Hagström was able to muster on 2010’s Take Cair Paramour (a record which certainly would have won album of the year honours from us had we inaugurated ID:UD one year earlier). There are plenty of differences between that record and The Victorian Wallflowers, and I want to get into the specifics of how both the broader pop landscape has changed and how Ashbury Heights have reacted to that, but my first impression, as has become somewhat customary, is one of respect for how cannily Hagström can construct well-considered but immediate songs. Your take on the record in terms of songcraft?

Alex: Before we get to that, I have to address your take on where this fits into the Ashbury Heights catalogue, because to me it sounds like a pretty direct follow-up to The Looking Glass Society rather than a throwback to Take Cair, but with the pop production and presentation amped way, way up. I liked the latter album, but didn’t think about it a ton over the last couple of years. A recent revisit revealed a host of excellent songs (“Glow”, “Piano”, “Starlight”) that really set the table for The Victorian Wallflowers‘ particular flavour of gothic (as in gloomy and romantic) pop.

To answer your question though, yeah, as with every Ashbury Heights release this is a reminder of what an amazing songwriter Anders Hagström is. His knack for choruses, his clever arrangements and his capacity to marry lyrical themes to musical ones are on full display here, end to end.

That said, that wasn’t the first thing that stuck out to me when listening to the record, or even on my numerous subsequent listens. It’s the fact that more now than at any time in the project’s history Ashbury Heights have gone hard on accessibility and immediacy in terms of production and presentation. Listen to “Firebird” for example; I don’t know that there’s a significant difference between it and a song you might hear on the radio, and it’s not the only number you could say that about. And that’s a good thing! We’ve talked so many times about bands in Our Thing reaching for pop appeal but coming up short because they can’t grasp the intangibles that go into making proper pop records and just ape easy signifiers. This is one of the only records to hail from our end of the pool to really make that sound work, and that’s worth noting. There’s definitely a few production choices I’m not 100% sure about – see the not-quite-old-enough-to-be-retro dubstep wubs that come up here and there – but by and large it’s a ludicrously well made LP.

Bruce: Definitely. I was initially a little surprised to hear a friend or two commenting on the “EDM” flavour of the record, and it took me a few listens to discern what to which they were referring: the pinchy-side chaining of “Ladders”, the euphoric trance build and half-time breakdown of “Waiting For The Fall”, the beckoning pulse of synths on “Tomorrow Is Dead To Me”, smoothed out to pastel breezes. Those sounds are just so thoroughly integrated into whatever moments of radio pop might drift into my ears while at the grocery store that I have trouble flagging them as having a specific point of origin rather than just being part of the ever-present miasma of “now”. Hell, even the “whoah-oh-oh” backing vocals on “If You’re Shooting With The Left It Means The Right Side Is Working” feel like they could have come from any number of R&B-dusted over-produced rock songs I hear snippets of on sports television (also, I’m still trying to figure out if the title of that song is some pithy comment on the political allegiances of the absent working classes the song eulogizes). I guess the reason those individual features didn’t stick out to me at first is because they were blended so well into the actual songs that I wasn’t focusing on the components; I was more taken by just how speedy, poppy, and yes, fun this batch of songs about melancholy and disaffection were.

If I were to try to identify specific modes or markers in the album they’d be those of more traditional influences on Ashbury Heights (and the fields of synthpop and electro-pop in general), albeit of a more modern vintage. The detuned bounce of “Science” really reminds me of the ways the Pet Shop Boys (still my #1 point of comparison for the how and the what of AH’s greatness) have updated the house sounds which have always been close at hand for them over their past four LPs. “Missing Mr. Murchie”, which marries mournful reflection to bubbly-soft horns and tinkles and fully-charged electro-pop rhythms, is a dead ringer for McCluskey-solo era OMD (an often unfairly overlooked period you’d expect a pop omnivore like Hagström to find recoverable).

So before we hash out how The Victorian Wallflowers does and doesn’t fit in with the legacies and aesthetics of its predecessors, let’s talk about something that’s never changed from Angora Overdrive to the present: the cleverness of AH’s songs, not just in terms of sounds but themes and lyrics. Which songs jumped out for you in terms of those?

Alex: I think “Waiting for the Fall” is a really good example of Anders at his best as a lyricist. The chorus inverts ‘waiting for the night’ from anticipation to melancholy resignation, so it reads as this huge upbeat dance song (with some very nice piano flourishes thrown in) about wanting to go home because you’re sad. I also really dig the switch in “Domino” where the song reveals itself to be less accusation than self-deprecation in the middle, with Anders and Tea really leaning into the words “it’s almost as if you didn’t know better” with relish. Ashbury Heights really cultivate gloomy fun as their brand, and the fact that they can consistently convey that without ever sounding joyless or trite is pretty cool.

So, this is Tea’s second LP with the band, and can we talk for a second about how great a fit she is? She gets two very early showcases on opening anthems “Headlights” and “Firebird” and knocks both of them out of the park, showing tons of personality and charisma in her performance. I’m also super into the lower register stuff she does on “Corridor” and the odd little falsetto vocalisms on “Long Lost Dead and Gone”, the parts that show off her versatility.

That might even be what really sets this record apart from the catalogue: Ashbury Heights has always really hinged on trading lead vocals back and forth, but the spotlight has generally always been on Anders because, well, it’s his band and reflective of who he is as a songwriter and performer. What Tea manages via a lot of personality and confidence is to take ownership of her parts and work herself into the fabric of Ashbury Heights. No offense to ex-members Yasmine or Kari (both of whom made records with AH I unabashedly love) but I feel like Tea really plants her flag across the entirety of The Victorian Wallflower and a lot of its success belongs to her.

Bruce: Yeah, this is one of the slightly awkward questions I’d like to ask of both Anders and Tea: how did recording a second LP as a pair feel in comparison to the extant AH record? Without being privy to the division of labour behind the scenes, I can only say that the pair have found a variety of ways to not just harmonize and trade-off vocals, but are composing songs specifically built around that dynamic. We saw them field-testing this sort of writing well outside of the band’s normal purview with the Skeleton Tree series a couple of years back, but they bring it back here with tunes like “Headlights” (somewhat meta commentary on anticipation for the record itself?) and the aforementioned “Long Lost Dead And Gone”.

So to get back to the difference of opinion we started with, for me this new record cleaves closest to Take Cair in terms of offering up immediate tracks which hinge on vocal melodies and sharply executed synths which borrow from contemporary pop. The grandiose gothic constructions of Looking Glass Society have an influence on Wallflowers, but those constructions feel more subterranean, acting as a foundation for the catchy, sentimental, and all-around lovely melodies which cavort about the record. I enjoy listening to Wallflowers in the same way I did Take Cair, to the point that it’s so easy to listen to I worry that I’m taking it for granted and not doing the oh-so important “critical” listening I like to subject albums to before discussing them. Final thoughts on the band’s fourth LP?

Alex: I don’t think it’s any secret that we’re both super-into Ashbury Heights, and I’d like to think that listening to The Victorian Wallflowers would point to why we stan for the project so hard. The songwriting, the production and the overall execution are all top-tier, that’s the easy stuff to latch onto. It’s also identifiably of Our Thing, while also functioning as this huge, gothic pop record. It’s ambitious and smart and fun and never cynical, and those things lift it up and make it a genuine pleasure from the first listen. Highly recommended.

The Victorian Wallflowers is available now digitally, and on CD via Out of Line.