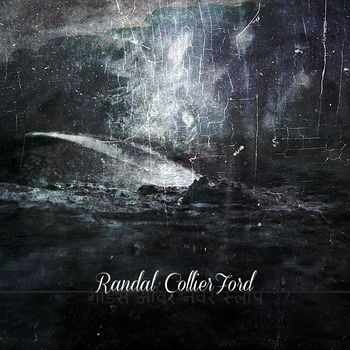 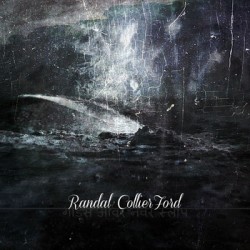 Oregon’s Randal Collier-Ford has been prolifically issuing releases in the dark and ritual ambient fields for a few years now as Mors Universa, under his own name, and also in collaborative projects like The Temple of Algolagnia. I was first drawn to his work by the softer dark ambient moods of Filosofia as well as the harsher and more scraping style of the De Vivis Somnium Mortis releases. गोड्स आवर नेवर स्लीप (“Our Gods Never Sleep” in Hindi, if I don’t miss my guess) marks a slight adjustment away from the former genre and into purer drone soundscapes, with mixed results.

Opener “Sermon Of Bones” indicates that this is a different mode for Collier-Ford early on, sticking to a simple structure of a slowly shifting organ pad occasionally (and tastefully) augmented by softly struck piano figures. It’s a calm and pleasant enough piece, the sort of thing which I’d have no problem tagging as straight up ambient, with no hints of the “dark” prefix apart from its title. However, towards the end of its ten-minute run-time “Sermon” shifts to a mode which presages many of the more experimental ends of the record still to come: sustained minor chords which hold so long that the focus shifts from mood and onto the details of the tones themselves. This attention given to sound design carries through much of the remainder of गोड्स आवर नेवर स्लीप. The long pitch-bends and phase-shifts of “Awakening Deathless Sleep” sit forward and naked in the mix with little to no adornment, keeping the listener focused on the timbre and texture of sound rather than atmospherics.

This dedication to minimalist constructions serves some of गोड्स आवर नेवर स्लीप‘s tracks better than others. The low hums and ebbs of “Mercury” are plenty evocative and deep; a good example of how much can be wrought out of the most austere of synthesis. “Blocking Out The Sun” takes that same template and gets some chills from simple pulses and tics being added. On the other hand, the slow circling static of “Flares Of The Black Sun” invite Nurse With Wound comparisons which it can’t measure up to, and on the sample and field-recording happy “Birth Of The Machine”, sound design seems to be a concern entirely separate from composition or movement.

Collier-Ford isn’t yet at working at the level of the greybeards of dark ambient in terms of atmospherics or arrangement, but his instincts are good and his passion for digging into interesting waveforms gives his work a unique appeal. गोड्स आवर नेवर स्लीप sounds like the results of integrating new approaches or equipment into an established workflow, with all of the hiccups and happy accidents that might entail. While this isn’t Collier-Ford’s best work, it’s ample evidence of why he’s worth tracking, and hints that his most exciting material might not be too far off.