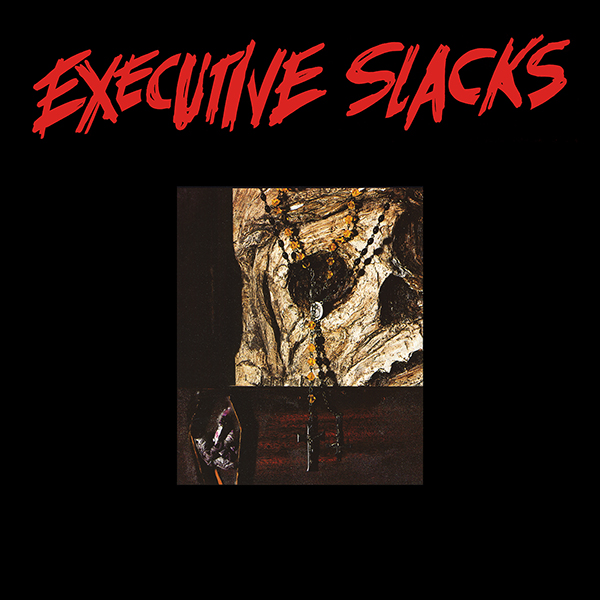 Replicas is the handle we use to write about reissues, offering some thoughts on the original release, and whether or not there’s enough goodies to warrant a repurchase if you own a previous version of the album. In today’s column we partake in an early bit of art-goth from LA’s famed goth community… 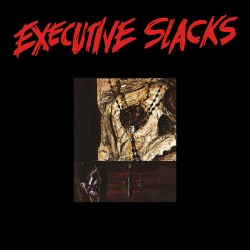 What is it? The self-titled four track EP by Executive Slacks was originally released in 1983, and showcased a much more rough and tumble sound than the albums that would follow it. While the Philadelphia trio is generally thought of as a goth rock band (mostly on the basis of 1986’s Fire & Ice and their inclusion on an endless number of haphazard Cleopatra Records comps), their earliest release feels more akin to the mutant grooves of Primitive Calculators (or even Foetus) than it does anything by say, The Sisters. Across 14 minutes the Slacks establish an effective MO, with homemade metallic percussion and synths on rhythm while hollow sounding guitar scrapes and bleeds all over the place.

It’s bracingly vicious stuff, not so much aggressive as it is wound up and off-kilter. The Slacks were especially adept at invoking Ballard-esque wonder at the ugliness of the mundane, with the two best tracks lyrically dedicated to “The Bus” and “Cinema”, transforming their commonplace settings into a tableau of paranoia and revulsion. “So Mote it Be” and “30 Years” feel less halting and more mechanical in execution, their cycling basslines almost resembling body music at various points. Yeah it’s brutal and sweaty, but it’s also strangely funky and presages any number of modern electronic acts in various styles (James Murphy of LCD Soundsystem specifically cites “The Bus” as an influence on his work).

What’s on this reissue? Dark Entries’ habit is to present records as they originally appeared in terms of track selection, which in the case of shorter releases like this one brings the question of value into play. Fortunately Executive Slacks is filled out with a larger than average amount of photos and press clippings, all arranged in an artfully designed liner booklet. It might not be enough to warrant a repurchase if you have an original copy (or the songs on the compilation album You Can’t Hum When You’re Dead), but DE always makes the effort to make their releases look like nice collector pieces, and that sort of thing matters a lot in the reissuing of obscurities game.

Who should buy it? Those in the mood for a visceral take on art-punk would do well to check it out, as would those only familiar with the latter work from Slacks’ catalogue. It’s the sort of underestimated gem that shines much brighter with the benefit of a few decades unheard, with all kinds of interesting parallels to contemporary and classic acts to posit and puzzle over.