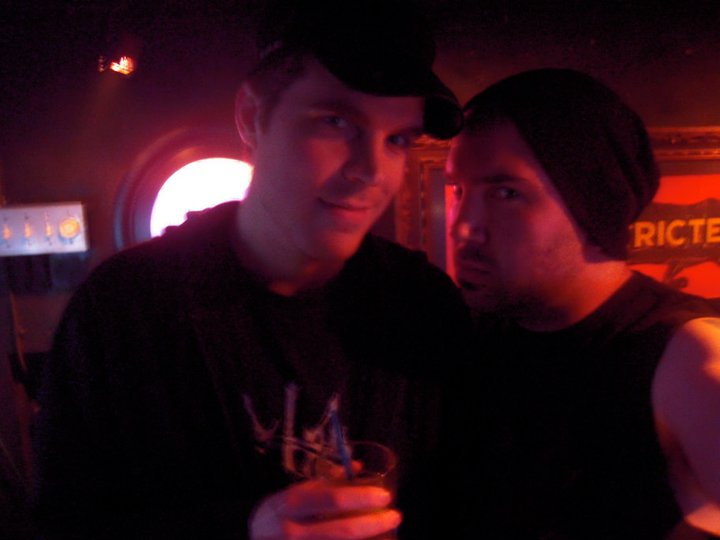 What’s the good word, folks? Summer’s in full swing here in Vancouver, whether that means beer festivals, nature walks, or the start of the local baseball season, where we’re home to the three year reigning Northwest League champs, the Vancouver Canadians (we’re partisan: sue us)! One local happening we’re particularly excited about is the re-opening of Club 23 West, the spot that was home for our various goth-industrial nightclubbing endeavors for nigh on a decade. We’ve had a bit of phantom limb syndrome happening while DJing out in Vancouer’s wild and woolly yonder; like masterless ronin we’ve plied our trade without a roof to call home, but in theory that’s all over and done with now. Home is where the heart starts roaming and all that. Here’s yr weekly dose of tracks, pals. 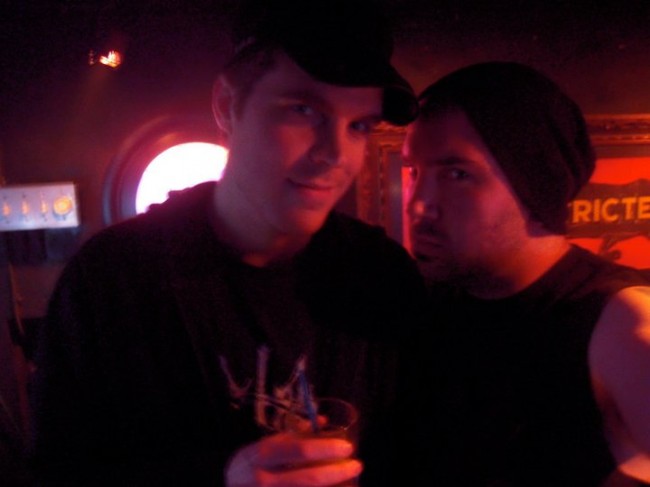 The senior staff holding it down at Club 23 West circa 2008. Note the "Restricted" sign which gave our crew its production company's namesake.

Koban, “401a”
Some more bleak goodness from Vancouver’s punky darkwavers Koban. The Vancouver based duo have been doing their share of local shows in anticipation of their upcoming VIDE EP and a soon to be kicking off tour that’ll take them across the ocean to Europe, the ancestral homeland of dark n’ creepy drum machine based rock. Like Animal Bodies (another Van-based act you won’t hear us say a bad word about) they’re amongst the first string acts in Vancouver’s neo-goth renaissance, with plenty of proper tunes to get them where they’re going. Pay attention.

In Death It Ends, “Theme From Metamorfosia”
Man, we’re not even sure what to tell you about In Death It Ends at this point. Porl King’s retreat into pure guitar drone worship seems to grow ever more crucial as it does hermetic and exclusionary. Looks as though this cut, which is all about compressed high-end rather than doomy low, is part of some movie/soundtrack deal that the gang over at Phantasma are putting together. We’re getting super “The Tenant” type vibes off of this vid, but what do we know?

C/A/T, “Justice”
Okay, so remember when Ben Arp killed off his main musical project C/A/T a few years back and restarted from scratch with Corvx de Timor? Well, he’s decided to dust off the ol’ Chaos & Terror moniker for some new music, although the few tunes we’ve heard so far lean more towards the CdT material than his rhythmic noise or electro-industrial tracks. Those latter sounds aren’t entirely absent from the mix though, as evidenced by the nasty glitching and sharp percussion that pops up on this song, “Justice”. If you like what you hear there’s bound to be more, so head on over to Facebook and give a like to be kept in the loop.

Yingthi, “First Steps”
New US producer Juliya Smith’s first release gave us some perplexing feels, and from what we’ve skimmed from Yingthi’s debut LP Everything Is An Ocean, a slightly more beat-heavy vibe is currently being reached for. That doesn’t mean that Smith isn’t still opting for avant garde smears of samples and strings, just that there might be a bit more classic electro-industrial kick underneath the hood. Keep yr eyes open for a full-length review, and check this tune in the meantime.

labXiV, “Turn Me On (12″ Mix)”
It’s been nearly two full years since we last crowed about labXIV’s “imminent” (“immiment”!) debut release, but the super-mega-plus 12″ is finally here, chock-full of shopped out mixes and extended cuts. Splicing Moev and super-early Ministry, there’s plenty to love in these strictly regimented yet suave chill synthpop tunes, so if yr late to the party just slink in through the back door and we’ll be civil enough to look the other way.

V▲LH▲LL – Ɖ0Ɯƞ Iƞ ƚhę ƜǪoƉƽ [M0✟I0N]
We brought you a different version of this track a few months ago, at the time thinking that the song wouldn’t make V▲LH▲LL’s debut album due to a clearance issue with the sample of “Teddy Bear’s Picnic” (f’real). With the offending clip removed it’s looking like the song will make the album after all, with an appropriately nordic video clip to boot. Still no official word on when the debut full length will be out on Artoffact, although it’s probably safe to take this clip as an omen; V▲LH▲LL are still all frost-blasted hinterlands and spectral menace.