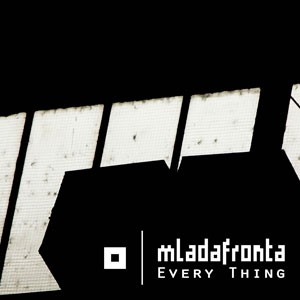 Replicas is the handle we use to write about reissues, offering some thoughts on the original release, and whether or not there’s enough goodies to warrant a repurchase if you own a previous version of the album. This time we excavate the discography of one of Europe’s most nuanced and celebrated industrial composers, via an exhaustively presented boxset… 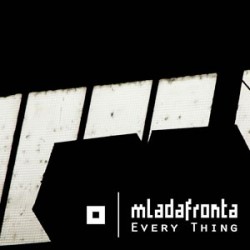 What is it? Every Thing represents the sum total of France’s Rémy Pelleschi’s work as Mlada Fronta. Spanning twenty years, Mlada Fronta’s catalog bears the signifiers of nearly every moment in the history of industrial composition since the project’s inception: from gurgling but resolute sorties into once definitively provocative hybrids of electro-industrial and techno, to essentially inventing the sub-genre of tribal industrial, to more recent micro-sculpted exercises in sound design.

Navigating back and forth through this wealth of material, it’s easy to get lost in history: some of Pelleschi’s work is utterly of its time, some feels wholly separate from it, our current era, or any other period. This feeling of disorientation is only amplified by the near total lack of vocals. Without any guideposts, it’s tempting to flit through Every Thing almost at random, like a ghost on a derelict spacecraft made up of labyrinthine corridors and expansive engine rooms. Where am I? What time is it? Have I been here before? Have I been here forever?

What’s on this reissue? It’s right there in the title, sparky: everything. Every album, every EP, every remix, every single note Pelleschi officially laid to tape, plus plenty more that weren’t released. The first two discs are dedicated to the new Contrast releases, made up entirely of unreleased tracks. Each of these is cryptically only given uniform index numbers for titles, leaving it up to the fanatically dedicated to determine their point of origin based on sound. After that, things proceed in reverse chronological order, winding back from 2012’s Le Cycle Du Soleil to 1993’s Tribal Apocalyptic Trance.

Artoffact have come up with an interesting arrangement for delivering all that material, however. All of Mlada Fronta’s LPs and major releases appear as audio tracks on the set’s ten discs, with one release per disc. So far, so normal. But pop any of those discs into your PC and you’ll find a wealth of videos, artwork, and most interestingly, bonus mp3s. While it might have been cute to have all of the latter be paired with their corresponding major releases, with the Oxydes remixes appearing on the disc of their source material, and debut 1993 EP My Visons showing up alongside Tribal Apocalyptic Trance, I can see how this might prove unwieldy. Sliding ten discs in and out of your box just to drag over folders which could’ve fit on a pair of discs (like the Contrast discs, where Every Thing does stash them) could grow wearisome. As it sits, album art, photos, and period videos are predominantly but not uniformly matched with their origin releases (although some, like the cinematic yet conceptually abstract Dioxides videos, are spread throughout the box).

The only reason for a Mlada Fronta fan to not buy this would be if they literally had every single release Pelleschi ever issued, in which case they could just buy the Contrast compilations digitally from the Mlada Fronta Bandcamp. Even then they’d still be missing out on the video content, and something tells me anyone that fanatical wouldn’t be happy without completing their hard copy collection.

Stretching my brain to further reaches of pedantry I guess I can imagine there being someone out there complaining (this is industrial, after all) about the fact that the lesser releases aren’t pressed as lossless audio on CD. If that’s a deal-breaker for you, so be it: the remix tracks (though not the standalone EPs) can be bought as FLACs from Bandcamp. In offering the primary catalog on eight discs (plus two more for the unreleased stuff), Artoffact aren’t just giving a streamlined and unified listening experience (I can’t be the only one mildly miffed when a CD reissue of a classic LP abruptly switches from the final notes of the original to a shoddy home demo), I imagine they’re keeping costs down: being able to offer Every Thing for $70 likely wouldn’t be feasible if it swelled to include another three or four CDs. You’re smart. You know a bargain when you see one, and I imagine by this point that you know whether this is the steal for you that it is for me.