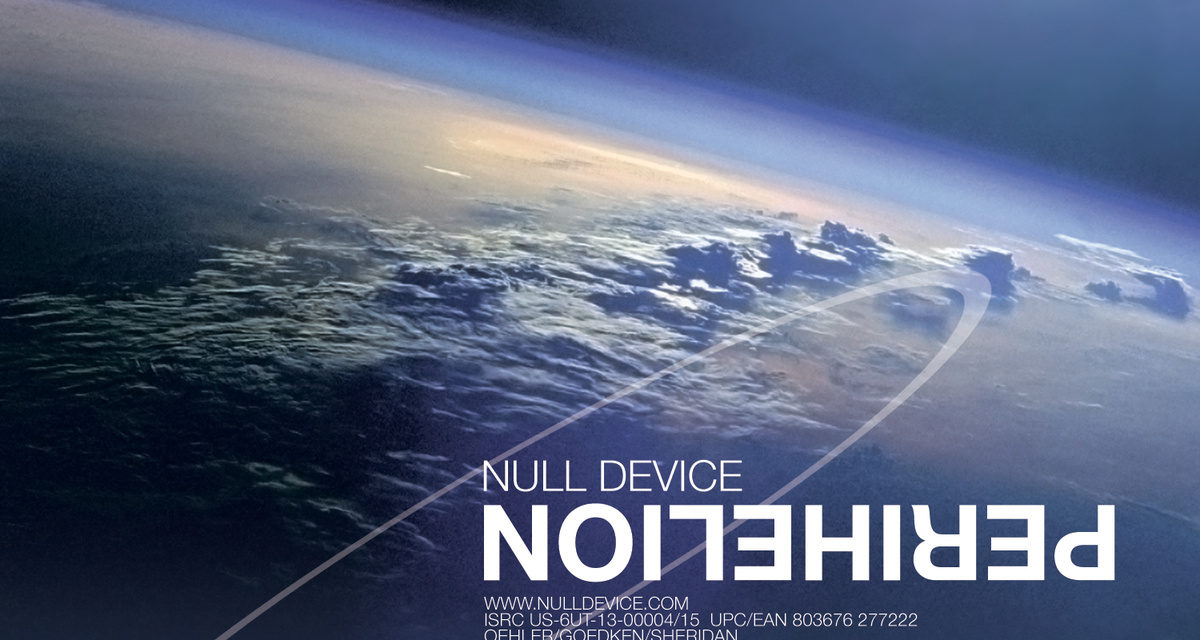 Listening to a record like Null Device’s Perihelion is a pleasure for a couple of reasons. Firstly, and maybe most importantly, the Madison, Wisconsin based trio have boatloads of character. Null Device always sound pretty much like themselves, their shared history coming across in the blend of synthpop, modern production techniques, and world instrumentation they’ve been honing for over a decade. Secondly, their grasp on the “pop” part of their musical blend is quite strong, with songcraft emphasized on each of their fifth album’s eleven tracks. That balance between style and substance is the key to what makes ND so listenable, with charms both subtle and obvious.

Maybe the quintessential example of why I enjoy Perihelion can be found in lead off track “The One Who Came After Me”. Between the restrained dubstep touches in the production, the eastern melodic motifs, and the well pitched vocal turn from Eric Oehler (enumerating a list of complaints about an ex-lover’s old and new boyfriends that cleverly reveal more about the narrator than their alleged subject), it’s an early high point for the album. It all hangs together so well that oI found myself focusing less on the individual elements and just enjoying it as a pleasant pop tune. That formula is revisited numerous times throughout, as on the dramatic, tabla-infused “Metaphysic” and “Night Owl”, a lament for aging club kids. There’s even some tasteful use of deep house vibes on “Cockatoo Girls” and the bouncy “Indecision”, further evidence of Null Device’s skill at drawing musical elements and tropes together under their creative umbrella.

Now I should note here that I think this is a fun and enjoyable record and not a complete knock-out. Null Device don’t make any wrong moves, it’s just that their attention to fine production detail and ultra-smoothness in performance tends to flatten out some of the emotional peaks and valleys that might have otherwise formed. That’s fine really; I don’t feel like the band would be well-served by roughening up their sound in any way, the album’s temperate nature is mostly just a function of how cool they play it. When the band occasionally allows emotion to win out over wit (as on the lovely closing ballad “Torchlights”), the effect is so striking that I wish they indulged the impulse more often.

Still, many bands won’t ever produce anything as accomplished as Perihelion, and Null Device deserve a great deal of credit for that. I’ve listened to it three or four times today and am still uncovering little musical details and lyrics I think are interesting, easter eggs hidden in the LP’s manicured long grass. They’re a band who are well worth paying attention to if for no other reason than they have a firm grasp on who they are and are continuing to explore how to be the best possible version of themselves. I’m happy to have taken the time to listen to this record, and will undoubtedly indulge it a few more times; it’s proven to be a charming and convivial diversion in the dog days of summer.