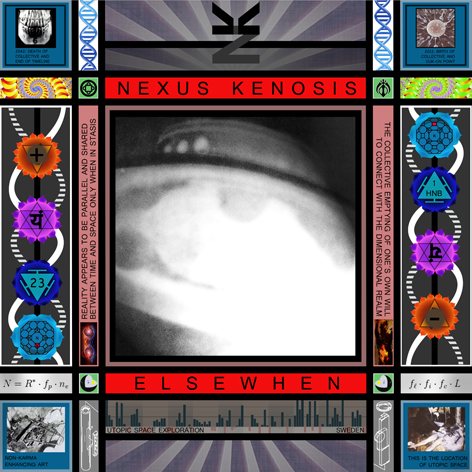 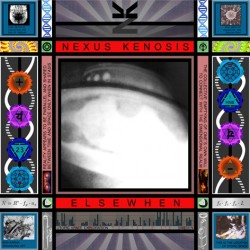 Henrik Björkk’s discography, to quote Grosse Pointe Blank, reads like a demon’s resume. From the dark ambient of Nordvargr, to the blast furnace power electronics of Folkstorm, to the harrowing black industrial of Mz.412, the Swedish renaissance man has never shied away from the darkest of musical climes. On his latest endeavor, he returns in part to his EBM roots, though Nexus Kenosis’ debut release is certainly marked by the bleak journeys Björkk has undertaken in the interim.

For many people in the industrial world, Pouppée Fabrikk will still be the first project which comes to mind when Björkk’s name is mentioned, and those people should be well served by Elsewhen. Its core song structures are rooted in classic, take-no-prisoners, Swedish EBM basslines. Though, like so many of the great recent SwEBM acts we’ve discussed at ID:UD, what lies on top of those basslines is far more experimental. Opener “Future Divided” stacks cold, bleepy leads atop the bassline, and a mess of staticky, tenebrous fuzz and distorted vocals, a tense feel which brings countrymen Severe Illusion to mind. Similarly, “Await Salvation” would be quite the punchy workout were the swing of the groove left to its own devices, but with its flanged vocals and sequencing which makes the listener feel as though they are perpetually being sucked down a drain, it’s another beast entirely. Björkk avails himself of modern production throughout, which also complicates attempts to pin Elsewhen‘s sound down to a particular era.

It’s difficult to separate out which of the sounds that are drizzled over the EBM basslines like syrup extracted from the hoariest ironwood tree come from a possible latent interest in electro-industrial and which are the result of Björkk’s work in more “difficult” genres with Folkstorm and Mz.412…and perhaps that’s for the best. I found I had more fun with this record when I started enjoying its more formally experimental moves (which begin to crop up around the midway mark) for what they were rather than trying to pinion them within an overarching frame. The wet, glitchy breaks of “The Fire Solenoid #2” almost bring Meat Beat to mind, and the dots between dark ambient and current esoteric shit from outside of the industrial world are connected on “Third Eye Wide Open Blind”. Nexus Kenosis’ name and imagery allude to gnosticism and Thelema, though I feel on far firmer conceptual ground with the title of “Haarkonen Babylon”. I shudder to think of what that abominably decadent and corrupt house would inaugurate as its own pleasure city, but Nexus Kenosis’ vision sits in a bizarre space where powernoise makes moves to drill n’ bass, but all seen through Elsewhen‘s wet and grimy filters.

Elsewhen carries a thread of thick complexity and darkness, but it also feels like an exercise in the theory of side project as pure catharsis: simply venting urges and airing material that might not otherwise find an outlet, though the concentrated darkness of the material gives it a thematic unity above its core sonic template. As I mentioned earlier, those who’ve been faithfully playing their Summoning 12″ every Samhain in the hopes of conjuring up a new Pouppée Fabrikk album will come for the EBM, but I’ll wager that they’ll stick around for the darker, stranger fare.