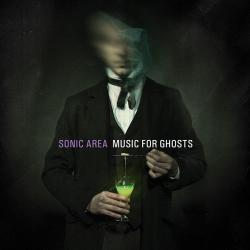 I’m always reluctant to fall back on describing music as being “cinematic”, if for no other reason than I think it attaches a lot of unintended and ambiguous context to a given record. Does it mean the record is like a soundtrack for a movie? If so, what kind of movie? Is it because it has some kind of narrative? Is it just shorthand for “a collection of music cues”? It’s a problematic descriptor, but I’ll be damned if I can come up with any better way to discuss the music on Sonic Area’s Music for Ghosts. Judging by the number of filmmakers name-checked in the booklet (from Argento to Noé) it’s a frame of reference welcomed by Arco Trauma, and one that the album embodies from end to end.

In contrast to his work in Chrysalide with his brother Syco, Arco’s current identity isn’t about jarring shifts or deliberate conflict. Where the former’s fabulous 2011 effort Don’t Be Scared, It’s About Life defies the listener to not give it their full attention, Music for Ghosts is about a much subtler kind of listener interaction, occasional bombast aside. It’s fairly easy to draw an arrow from Arco’s more confrontational work to a song like “Eureka” with it’s distorted beats and manic orchestra loops, but one doesn’t ever get the sense that the audience is being challenged, so much as being swept up in the goings on, in whichever form they take.

With that understanding, there’s actually a fair bit of ground covered over the course of the LP’s 14 tracks. Opener “Never Ever More” has a creeping menace in its spooky plucked figure that gradually builds into a fuzzy crescendo notable for its sense of restraint as much as its muscly synth tones. Songs like “The Living Carousel” and “The Endless Staircase” trade in a kind of haunted circus music, their loping mechanical rhythms taking on an unnerving quality when set against their slightly off-key organ and harp melodies respectively. Elsewhere “Inframonde” takes on a classic synth motif that evokes a sort of cheapened cosmic wonder, the sort of music that plays when the aliens leave earth in any given bit of boiler-plate sci-fi. Hell, even the twangy, reverbed jazz that Badalamenti employs in his work with David Lynch gets invoked on “Haunted Hall Motel Ballade”, albeit shot through with a snare that sounds like a car door being slammed from a distance.

The thing with Music for Ghosts is that although “score for a movie never made” is all well and good as creative premises go, minus the actual visual components the songs need something special to evoke the imaginary film they’re supposed to accompany. “Once More Unto the Breach Dear Friends” pulls it off by throwing some typewriter sounds and oddball piano accents into it’s stew of squeezebox and sing-song synth voices, but it’s sadly one of the few songs that has a life outside the album itself, and doesn’t play as a kind of compositional exercise. Trauma establishes these sorts of archetypal slices of soundtrack music and then undermines them with weird arrangement decisions, but for all its cleverness it’s never really commenting or playing off the tropes it’s invoking, just sort of viewing them through a skewed lens. I don’t think it behooves Sonic Area to make any kind of statement about program music as such, but it would be nice if such a meticulous and expertly assembled record had some ambitions beyond just tinkering with style. It’s still a reasonably interesting listen, just not one that feels especially resonant beyond its central conceit.