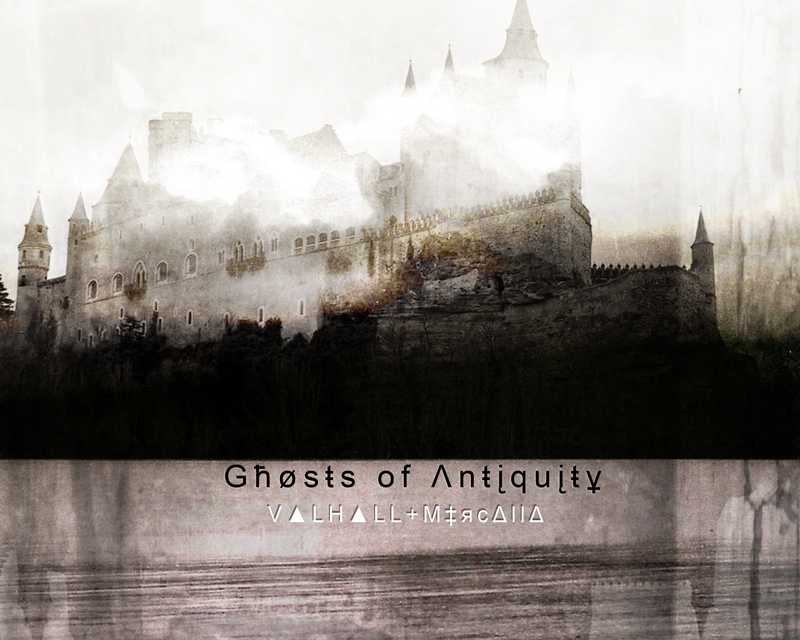 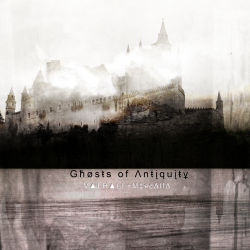 It seems impossibly soon to posit the existence of post-witch house music, but I don’t know that there’s any other way to classify V▲LH▲LL and M‡яc▲ll▲’s split release Għøsŧs of Λnŧįquįŧұ. For one thing, the actual emergence of witch house (or drag, or whatever arbitrary title you want to assign to the triangles n’ crosses bands) is recent by most standards, the definitive moment being the collective “meh” given to Salem’s King Night, the record that was supposed to either define or signal the death of a nascent movement, depending on who you asked. For another, there’s little to link the music on the EP to anything bearing the witch house tag, with the exception of the ritual abuse of unicode. And yet here we have an EP steeped in OKKLVT signifiers but removed and advanced sonically from whatever WH was supposed to be at the moment of it’s emergence. And get this: it’s good. It’s really good.

As an experiment, I tried to divorce myself to as much as possible from the obvious associations with witch house when listening to Għøsŧs of Λnŧįquįŧұ, and position it purely based on what I was hearing. The results were telling, aside from some general rhythmic and atmospheric qualifiers, what I heard was a host of different sounds, few of which have anything to do with that particular tag. If you told me that either V▲LH▲LL or M‡яc▲ll▲ had emerged from say, the dark ambient scene or neo-folk or the current vogue for 80s electronics it would seem entirely plausible. For a split, the EP is simultaneously completely distinct from anything else I can think of, but still completely unified in its approach.

The tone of the EP is set entirely by V▲LH▲LL’s “To the D0ck5…”, on which synthetic strings emerge over distant voices, the deep bass drum sounds setting the pace for the rowers on a viking longboat with the waves of reverb becoming the waves lapping at its sides. That particularly nordic bit of imagery isn’t random, it’s overwhelmingly present and completely intentional, as evidenced by “R34CH The 5KY” whose initial bit of swirling electro bass is quickly replaced by a martial melody, and ghostly vocals laying out plans for conquest; “We sail at first light/Oceans deep and dark as night”.

The aquatic thread is continued into M‡яc▲ll▲’s “NøWђєrє”, where samples of the sea are set against a pulsing bassline and a choral vocal effect. Despite being explicitly connected to the young history of witch house by their releases on Phantasma Disques, M‡яc▲ll▲ eschew it, assuming a sluggish electro posture on the haunting “I’m Şŧill Ħєrє” and “Şpєcįєs oғ Gяo⁯єsqưєrұ”, the balance of pulsing synths and dark atmospheres achieving a unique balance; Gatekeeper by way of Berlin-era Rome, machines into ghosts and more broadly, ghosts from the machine.

It’s a conceit of record nerds, specifically music bloggers to build an entire genre out of a handful of disparate releases, but I can’t help but mentally corral Għøsŧs of Λnŧįquįŧұ into a pen with ∆AIMON’s superlative FLATLINERand Balam Acab’s Wander/Wonder. Despite the legions of people who trip over themselves to point out that witch house started as a joke tag on last.fm (as if genre names previous to it were handed down from a throne by John Peel and Paul Nelson, may they rest in peace), I think post-witch house has plenty of value as a way to classify them, and it’s an ultra-literal one. This is the music that comes after witch house, descended from it but not beholden to its limitations. As the thaw sets in we’re seeing more and more routes outward uncovered, and I’m fascinated to find V▲LH▲LL and M‡яc▲ll▲taking those roads to a restless, angry sea. Recommended.

Għøsŧs of Λnŧįquįŧұ is available as a name-your-price download from Bandcamp.