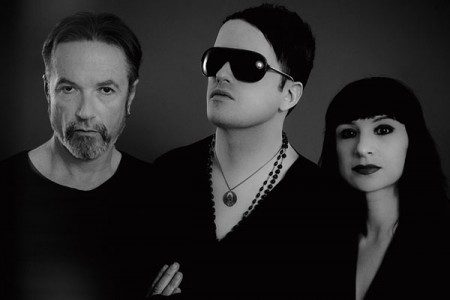 A wise man (or a man anyway) once said that Everyday is Like Sunday. I can only assume that by that he didn’t mean that he was drinking mad beers, watching ball and listening to There is No Time while nursing a well-earned Saturday’s revenge style hangover all week long, but it’s fun to imagine he did. For my part, I’d be happy to stretch some of these lazy days out a bit, but there’s music to be blogged about and kitties to get Instagrammed. Peep some new hotness in the form of our weekly tracks round-up! Polaroid Kiss, “Pay Your Dues (Assemblage 23 remix)”
I guess this has been kicking around for a while, but I hadn’t heard it ’til just the other day when the Stockholm based synth-rock/pop group put it up on Bandcamp as a pay-what-you-want promo (Edit: the band appears to have taken down the promo single from Bandcamp). There’s a dearth of information about them online, but I quite like both the smooth vibe of the original and this slightly clubbed up mix by Tom Shear that deepens the bass but keeps the vocals right up in front. It’s a good club mix; I think I’ll bust it out this weekend and see how the dancefloor likes it.

Curxes, “Spectre”
Curxes’ “Once Upon a Time” has been my shit for a few months now, and I’m happy to discover they have more tunes just as interesting. Vocalist Roberta Fidora still has that Siouxsie thing going on, but set against a more straight up rock bassline it lends it a more second wave gothrock steelo that scratches a specific itch. I’m gonna dig in deeper on their various 7″ releases and report my findings back, keep an ear open, yeah?

Autodafeh, “Emerging Sadness”
Aw yeah, more action from Swedish 242 devotees Autodafeh! Way back in January they gave us some samples of the songs they were working on for their next album Blackout Scenario, and the emergence of this particular bit of syncopated body music would seem to indicate that work is continuing apace. Singer Mika Rossi is a busy dude, between his various other groups (Aggrezzior, Endless Shame) and his work at the EKProduct label, he’s running the SwEBM game, and we eat that stuff up with a spoon.

V▲LH▲LL, “ÆG1R (They Go Into The Sea)”
You may remember this specifically nordic brand of spooky-bludd-witch-wave from our Witch Haus der Lüge mix a few months back, but we’re featuring it again as it’s now available as a free d/l on Bandcamp backed with “DR4UG W4ND3R5”. The hella mysterious project will be releasing a split with M‡яcΔllΔ (that’s “Mircalla” for those of you who don’t read witch house) in the near future, I’m hoping for more maximum ghost viking rowing joints like these.

DEATHAUS, “HΛRVEST”
You ever been to Winnipeg? Let me be clear, Venetian Snares wasn’t playing. The upshot of living there is that I guess you have a pretty crazy artistic community, as evidenced by their lively film and music scenes. This here slow-grinding tune is an offshoot of industrial-artist in good standing Distorted Memory‘s output. Good stuff, we like hearing peeps who are specifically based in Our Thing branch out into these witchy sounds and will be continuing to report on them as they emerge.

Haujobb, “The Ultimate Trap”
Oh friends, I would normally never do a super bonus update, but if you think I’m waiting a week to write about new Haujobb, you obviously have not gazed deeply enough into the abyss of our fanboyishness for Dejan and Daniel. New 9 track EP for “Let’s Drop Bombs” released like, 10 minutes ago in our in the ever popular pay-what-you-want format, featuring remixes tracks from their last album New World March by White Car, The Horrorist and Cute Heels amongst others, not to mention this brand new tune! Admittedly I haven’t had much time to suss this, but I am feeling how inline it is with the mechanical (distinct from “technological” IMO) feel of the NWM songs. Pump this shit like they do in the future!