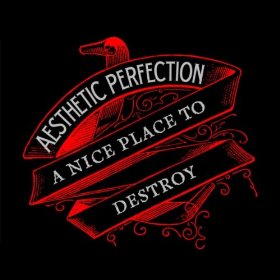 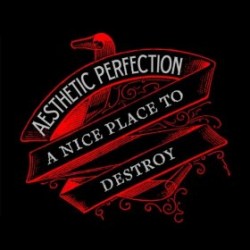 A little over a half a year since it’s release and Aesthetic Perfection’s All Beauty Destroyed still sounds good to our ears. Using his extensively toured sophomore record as a jump-off point, AP’s Daniel Graves forged ahead with an LP informed by new ideas and sounds that showcased an increased ear for melody and arrangement. Metropolis dropped a new digital single from the record this week, featuring the two tracks that bookended it; the harsher, dance-oriented “A Nice Place to Visit” and the sparse piano-ballad “All Beauty Destroyed”. How did the two tracks hold up to the remix treatment? Only one way to find out!

“A Nice Place to Visit (Album Version)”
While not my favourite “club” track on Aethetic Perfection’s last LP (that’d likely be either “Hit the Streets” or “The 11th Hour”), I do feel like this fulfilled the purpose of being a tone-setter for the record, picking up where A Violent Emotion left off while introducing some of the broader ideas that play out across the rest of the album. Outside that context it still plays pretty well, I’ve always liked how Graves uses the contrast between the harsh vocals, clean choruses and vocoder to flesh his songs out, and this uses that technique well. Still a solid dancefloor track, and a nice canvas for the remix single treatment.

“A Nice Place to Visit (Formalin remix)”
To be totally frank, I wasn’t expecting these Berliners to bring something this interesting to the table, mix-wise. One of the main issues I have with remixes is that as a rule they tend to be production-oriented rather than song-oriented. In practice that means that achieving a specific sound (either the remixer’s own, or that of a genre) is treated as an end in and of itself to the exclusion of making, you know, a good song. Formalin avoid that here. Their take has build to it, starting with a bare, mechanical take on modern EBM and slowly building into a big thick synthed-up chorus. It plays like an album-track rather than a dancefloor overture, and hell, I’m more inclined to listen to that than just another dance mix. Surprising, and good.

“A Nice Place to Visit (Double Plus Ten Remix)”
I can’t find the info on it anywhere, but I believe this group won the contest to get a remix onto the single. It’s reasonably good, sort of an Alter Der Ruine style techno-electro vibe, although without a whole lot to catch your ear. Technically competent and tastefully done, but minus anything that might jump out and grab you.

“A Nice Place to Visit (Of These Hope Remix)”
Don’t know much about Liverpool’s Of These Hope; a cursory search through Youtube suggests that they do a sort of processed synth-rock thing that kinda puts me in mind of Angelspit actually, at least at first blush. They seem to be going a little more electro on their AP remix than they do on the original, which is a bit of a shame since a more rock oriented version might have stood out more. Nothing wrong with this mix, although aside from its chugging rhythm most of the production details get a little lost in the wash over a few listens.

“All Beauty Destroyed (Album Version)”
The title track is actually my favourite song from All Beauty Destroyed, a simple piano theme and Graves’ vocals with no other trappings. Unadorned, it relies entirely on his skill as a performer and the strength of its melody to carry it. It’s ballsy, and just works. I’m glad it’s getting the split-single treatment on the single since I always felt like it deserved more shine as an indicator of what AP can do beyond club bangers.

“All Beauty Destroyed (Daniel Myer Remix)”
Daniel Myer knows low-key atmospherics, and that’s largely what you’re getting on this mix. I like the fact that he’s using some piano sounds but playing different parts than the original version, set against some Architect-like drum programming and synth sweeps. It’s not a jump-out-and-grab-you version by any means, but if you know ID:UD at all you know we dig on Myer doing these sorts of cleverly constructed slices of industrialized IDM, and this is no exception. It’s a dude doing one of the things he does well, always happy for a DM mix.

“All Beauty Destroyed (Comaduster Remix)”
I heard an earlier version of this a while back, and was totally blown away by it. Effect hasn’t lessened in the intervening months. Réal Cardinal is a master of this sort of sweeping, emotive technoid sound. Beautiful shimmering synth washes, meticulous drum programming and some light vocal stutters that achieve the vulnerability and austerity of the original via a completely different avenue. Just lovely. I honestly can’t wait for that Comaduster LP to drop.

“All Beauty Destroyed (EMP 80834 Remix)”
This mix is pleasant enough to listen to, if unspectacular. It mostly plays as the original plus synths and drums, but never really goes for it, content to just sort of amble along. The XP8 mix on the double CD version of the album took a similar tack but with more balls. I just want it to break out a little, show me something instead of idling.

“All Beauty Destroyed (Sensuous Enemy Remix)”
I sort of like the conceit of replacing the piano arrangement with synth strings, but otherwise keeping the song super bare, with the exception of a small amount of percussion. It’s probably the nature of this sort of orchestral sound, but I found myself waiting for an intense crescendo to put it over the top. Still, this is really well executed effort by Sensuous Enemy who clearly know their way around this kind of arrangement. Good mix.

“She Drives Me Crazy”
I love shit like this, just a cute industrial cover version of an eighties pop classic. Remember those Re-Constriction Newer Wave (or more recently the Das Bunker Choice of a New Generation) compilations? Target audience right here. At any rate, they always work best when they’re played totally straight IMO, which is exactly how Graves does this version of the Fine Young Cannibals’ definitive hit, falsetto and all. It’s a trifle, the sort of bonus that adds some value to these remix EPs. I can totally see myself rocking out to this while I’m getting ready for a night out. Fun!

The Takeaway: Ten tracks and no stinkers is a pretty good ratio for this sort of release, and I like the contrast between the versions of the big club song and the more subdued takes on the ballad. At $7.90 via Metropolis’ digital store I might balk slightly (the LP the original tracks are taken from is only a buck more in the same format), but fans could do far worse than the package presented. If you were gonna pick three (and assuming you already have the two album versions of the headlining tracks), I’d go with the Formalin remix, the Comaduster remix and the FYC cover.

“A Nice Place to Destroy” is available now via all major online retailers, and Metropolis Records’ digital store.