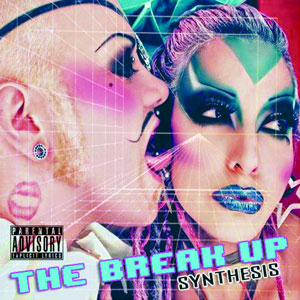 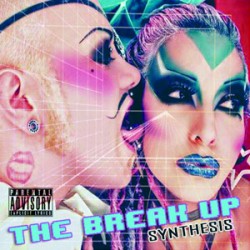 The Break Up
Synthesis
Metropolis

Electropop has become well woven into Our Thing by now, both by virtue of its relation to many genres that still get play and discussion in the goth-industrial end of the pool, as well as it’s relatively mercurial nature as a genre: it’s not quite electro and not quite pop, but it’s fun to dance to, you know? Interestingly enough it seems like the artists ushered into scene playlists over the last decade (Ladytron and Goldfrapp being the two most key examples) are generally coming from the outside, while the number of home-grown acts has been comparatively few. The Break Up, seem to be aiming to fill the latter gap, their late-2011 debut Synthesis feels informed by both global and niche styles of dark electronic pop.

Vocalist Severina Sol (Cylab, ex-Fockewolf, ex-Diva Destruction) and programmer/composer Shane Allen Hall (accompanied by Sarah Ann Stewart on keys and guitars) pretty clearly know their way around a good tune. The best parts of Synthesis apply a strong sense of melody and character to a pleasantly eclectic assortment of electropop tropes. Much of that is due to Sol’s versatility as a singer: she pulls off icy detachment and inviting warmth with equal aplomb when called upon to do so. I’ll cop to generally preferring the brighter, less-restrained application of her vocals; “Fever Pitch” and “Guillotine”, two individual highlights of the album, shine specifically because puts them over by force of personality. There are certainly moments where the opposite is also true: “My Machine” is the darkest and most sonically aggressive moment of the record, Sol selling the mechanical thrust of the lyrics with a robotic monotone. Her presence isn’t always enough to save some of the record’s slighter moments (the chorus to “Ninja” is just too silly, the arrangement to “Lightning” too scattered), but she certainly makes a case for herself as a versatile and capable frontwoman.

Instrumentally the songs on the record favour an uptempo feel, moving at an energetic clip that services them well, and covers the occasional stiffness in the synth programming. “Come Undone” buzzes and grooves along, playing as a distant but friendly cousin to synthpunk, a mode that works just as well when set against the faster two-step beat of “The Sun”. “Who’s Crying Now” takes it a step further, with a rockish arrangement of electric bass and drums that borders on post-punk and second wave gothrock, the lack of a killer hook the only thing that keeps it from totally blasting off. It’s still a reasonably good number and indicative of the greater strength of the album; even when a song falls short it’s because an idea didn’t quite gel rather than laziness in the writing and performance.

From a songwriting perspective every one of Synthesis‘ 13 tracks has a strong set of legs to stand on; one never gets the sense that production is making up for a lack of songcraft. That’s important for songs like these and an act like this; The Break Up seem to understand the importance of the hooks and melodies that make up the pop half of the electropop equation. That knowledge lends Synthesis a broad appeal, and helps make it pleasantly listenable effort whose best songs work both on and off the dancefloor.