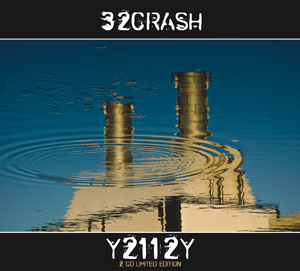 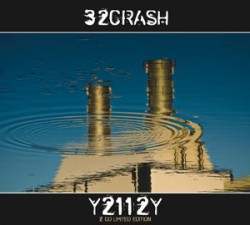 Never let it be said that the unmistakable voice of Front 242, Jean-Luc De Meyer, rests on his laurels. While new 242 material itself has been at a premium for years, De Meyer’s stayed busy with his half dozen or so side-projects, many of which skew towards the conceptually outré; the Modern Cubism project, for example, saw him delivering the poetry of Baudelaire overtop of moody, melodic electro tracks. 32Crash (which features De Meyer teaming with Len Lemeire and Jan D’Hooghe of long-standing Belgian electro outfit Implant), however, take the next century as their subject rather than the previous one, picking up in the science fictional wonderland where their debut, 2007’s Weird News From An Uncertain Future, left off. (Caveat: I’m a bit of an SF geek and academic, so this review may skew towards the thematic more than others.)

While all apparently taking place within the same future world dominated by advanced technoscience and conflicting sinister forces, both terrestrial and otherwise, it’s a bit of a misnomer to term 32Crash’s output as concept records, at least insofar as that term is commonly used to describe LPs with a coherent narrative. Their songs, rather, come across like individual news bulletins from the future, rather than components of a single overarching story; just check the “bio” on their site. Rudimentary Peni’s Cacophony, a heterogeneous tribute to the life and work of HP Lovecraft, might be a better reference for 32Crash’s brand of concept album than Ziggy Stardust, or closer to home, mind.in.a.box’s ongoing future noir saga. Rather than telling a science fiction story, 32Crash aim to convey the sense of information overload and future shock which comes from inhabiting a science fictional world (a technique which critics like as Fredric Jameson and sf authors like William Gibson have argued can be applied to our own current world, drawing its its increasingly fractured and alienating quality into focus by depicting it through a science fictional lens, but I digress). Set in the titular year of 2112, 32Crash’s new LP tosses scenes of time travel, alien invasion (both overt and secretive), bioengineering, environmental disasters, and time travel at the listener faster than they can process them. Consider the opening verse of lead track “100Y”:

32Crash are at once working in the sweeping, grandiose mode of space opera while eschewing its tendency towards infodumps and explication. Rather than pausing to give context to any of the narrator’s near-misses, the listener is constantly pulled forward, rushing through an unfamiliar setting without a chance to fully see or assimilate it, a technique common in much cyberpunk fiction as well as the film adaptation of Children of Men. (For their own part, 32Crash have cited modern hard sf luminaries like Alastair Reynolds and my own beloved Greg Egan as influences.)

The manic pace of 32Crash’s compositions, as well as the speed at which they fly past (20 tracks in 71 minutes) only adds to this effect. Like Weird News From An Uncertain Future, Y2112Y delivers dense, fraught music. Lemeire and D’Hooghe’s production features far less bass and prominent beats than their work in Implant or most modern dark electro, a good fit considering the band’s expressed desire to emulate tightly wound classic punk compositions. De Meyer is in characteristically excellent form, his evocative growl perfectly suited to the album’s warm, overdriven synths effects. While as a rule Y2112Y is a very dense affair, there is the odd more spacious track; after covering Suicide’s “I Remember” on Weird News, 32Crash offer an original track in a very similar vein, “The Attack On ZA4”. “The Man Who Came From Later”, “Hyperreal” and “Neighbours” are all stand-out cuts (as for the latter, I challenge you to find another industrial track which uses “artichoke sauce” in the chorus).

A limited edition of the album comes with a second disc of remixes and reworkings of almost the entire album as well as some bonus tracks (I bought the album digitally, so I’m not 100% sure of the credits, but it seems as though all of this was done in-house by the band themselves rather than being shopped out to external artists), which should be taken as re-imaginings or alternate takes rather than as remixes intended for club play as such; many offer a more languid or symphonic atmosphere.

Y2112Y is a sprawling, eccentric listen which deftly avoids the pitfalls and cliches of so much modern electro-industrial. There’s plenty to enjoy here, whether you’re a fan of De Meyer’s work, science fiction, or just of records unafraid to take conceptual and musical gambles.