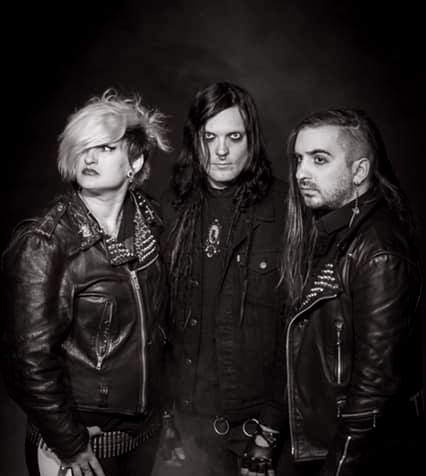 And so another Covid Hallowe’en is upon us. Unlike last year it seems like a lot of folks can actually go out in some capacity, but it’s still gonna be weird: just for example bars can be open and people can mingle but not dance here in Vancouver. Not back to normal is the current normal we guess and it’s always possible to take some small comfort in our baby steps back towards real nightlife. Maybe have a look at what’s in Tracks this week to see if anything might fit on your Samnhain playlist?

Boy Harsher, “Tower”
You probably don’t need us to tell you that there’s a new Boy Harsher album due in January, and that the band have announced a slate of tour dates, some of which sold out almost instantly. But here we are: one of the breakout acts and biggest deals in the last decade f are back with a film of their own devising, The Runner, and the accompanying soundtrack and we’re amped. Boy Harsher have pretty much transcended Our Thing inasmuch as they were ever a part of it but their influence on modern darkwave is such that it can’t be ignored. Super happy to hear them explore their less beat-driven sounds on “Tower”, a prelude to their next big move.

Temple, “Shapeshifter”
From just down the I5 in Portland but brought to us by way of the Alps on Swiss Dark Nights, Temple trade in a burly and rousing style of deathrock. SDN has a compilation of their previous couple of self-released tapes on offer in addition to the forthcoming Self Ritual Torture LP. Nice mix of swirly and driving elements on display here; should definitely appeal if you like early Horror Vacui.

Vain Warr, “Fuck in the Fire”
Joshua from Azar Swan has a very distinct side-project in the form of Vain Warr; where his main outlet has ranged from pop-adjacent dark electronics to more scathing soundtrack vibes, Vain Warr sounds to be working a nervous and noisy strain of post-punk. Listen to “Fuck in the Fire” and you’ll get the picture, it’s all tumbling drums, jagged and delayed guitar lines and huge washes of noise. It’s gritty and a little nasty in the right ways, consider grabbing the pre-order of Maleficia Carnalia now via Bandcamp.

Filmmaker, “Logic Bomb”
From Columbia’s always offbeat and eerily prolific Filmmaker, Multiverse Nightmare is a tape “almost entirely with FM synthesis” and chock-a-block with bright and swiftly-mutating textures and beats. Sure, there’s plenty of the funky EBM which might have first brought Faunes Efe’s work to our attention, but there’s also all manner of genre-fucking head-trips like this, linking all manner of heavy-duty dancefloors from the 90s to the present in a viscous and psychedelic package.

Confines, “Oro Y Muerte”
The title of Confines’ new release Work Up the Blood was inspired by seeing Jeff Daniels in a production of To Kill a Mockingbird, which is kind of weird but also kind of great. You may not have peeped Confines before, but the sound of “Oro Y Muerte” should give you a solid starting point: banging techno rhythm with yowled vocals and plenty of low grinding synth noise. Brought to you by the good folks at NYC’s Synthicide, this has some late in the year dancefloor potential we’re happy to explore.

The Necromancers Union, “Pet Semetary”
Trust our pal Daniel Belasco to come up with a fun Halloween bagatelle: a two track single featuring covers of “Alice” and that Ramones gem, “Pet Semetary”. The Necromancers Union has been a vehicle of Belasco to dig into gothy stuff far removed from his usual synthpop terrain as Glass Apple Bonzai, sometimes delivered straight, sometimes with a wink and a nod. And if there’s anyone who can pull out the melodic charms of late 80s Ramones, you know it’s Daniel.