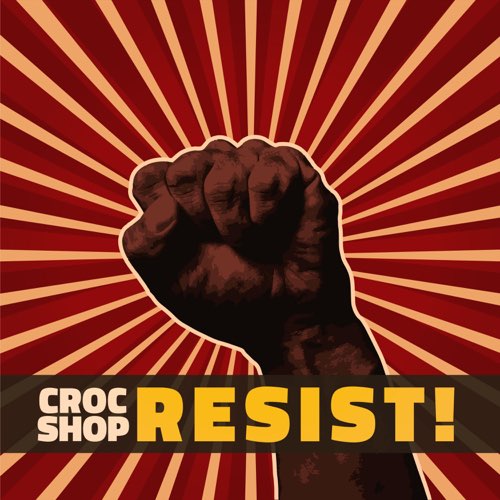 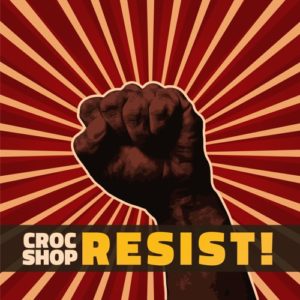 It’s been 17 years since the last Croc Shop LP, a fact that has lent the release of their new record Resist! a certain amount of interest. After all, despite having been founded as a post-punk act in the mid-eighties, the band made their bones as a mainstay of the nineties North American industrial scene, a fertile and well remembered era for fans of the genre. Would the duo made up of founding member Mick Hale and longtime keyboardist vMarkus bring a classic sound to the record, or would it be another evolution for the long-running project?

The answer is most definitely the former, and while Resist! is lyrically concerned with the current political climate of the US, the sounds on it are straight out of the mid-90s. That’s both a good and a bad thing. On the positive side, there’s a real nostalgic thrill hearing a composition like “Corruption” where samples from the news are set to a simple arrangement of bass synth and drums, complete with a pitch-manipulated backing vocals. “Escape” has a similar appeal, with sampled guitars adorning efficiently programmed drums and a nicely rounded bassline.

The downside is that Resist! sounds dated from a sound design and production standpoint – distractingly so. While there’s a certain amount of charm to be had from old school sounds like the tweaky synths that kick off “Pride”, it quickly turns sideways as the vocals, samples, guitar and synthlines all battle for space in the mix and arrangement. “Get Away” is especially notable as sounding less polished than an act of Croc Shop’s vintage and legacy should be producing; the vocals don’t sit in the mix at all and the leads and drums feel lifeless and drab. To be frank it sounds like a demo and not a finished album track.

Sometimes, like on closer “Here & at Home” the old school mid-90s electro-industrial sound works for Croc Shop, that track’s roaming arpeggio and peaky pads summoning to mind some of the style’s melodic classics. That number and a few others genuinely make a virtue of the throwback sound, and should hold some appeal for fans of the style and those who enjoyed Croc Shop’s original run of records.