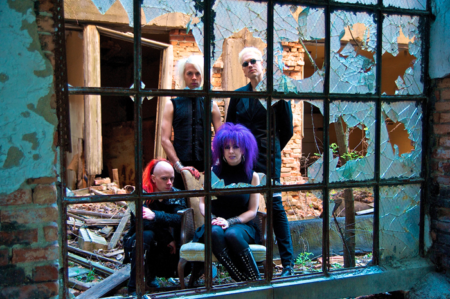 Okay folks, we’re getting real close to last call on reviews, as the end of the year hurtles towards us like a meteor. We’ve been feverishly making lists and scheduling reviews for the last couple weeks to make sure we get in as much pertinent to Our Thing coverage as possible through late November and the first couple weeks of December, but of course we have blind spots and there’s undoubtedly stuff we will have missed. Hence our need for you to help us out. If there’s a record you’ve wanted us to write up but haven’t see here yet, leave a holler in the comments and we’ll see what we can do. Mad gothick with The Bellwether Syndicate

HEALTH x Youth Code, “Innocence”
We don’t ever really talk about HEALTH on I Die: You Die, but we’ve been fans and admirers for years now. Consequently we were incredibly excited to see them teaming up with fellow Angelenos the Youth Code homies for a new track. Not a remix, but a straight up original new song, made in collaboration (like the recent singles HEALTH did with Perturbator and Soccer Mommy). This is on some “two great tastes” shit, with both acts bringing what they do to the table and the fusion of raw industrial and synthesized noise rock working beautifully. Absolute banger, someone put this out on a vinyl.

Spark!, “Två Mot En”
Long-time readers might recall that while we’ve enjoyed the last couple of releases from pop-inflected SwEBMers Spark! well enough, neither of them have quite recaptured the glory of their incredible Hela Din Värld LP. New single “Två Mot En” might not single-handedly change that trend, but it’s as strong and fun an effort as we’ve heard from the band in years.
Christer Hermodsson’s vocal is commanding yet relaxed, and the whole thing bounces along with the sort of joie de vivre which first attracted us to the group.

The Bellwether Syndicate, “Republik”
We will admit that despite being fans of William Faith’s oeuvre, we haven’t spent much time with his Bellwether Syndicate project. Shame on us, especially where it’s in collaboration with OG goth DJ Scary Lady Sarah. We will however have the opportunity to see them opening for Clan of Xymox this week, which is plenty good enough reason to start brushing up, starting with this new one from an as yet forthcoming album. Blessed good goth rock from folks who don’t just know the genre, but have been major contributors to it.

Blush Response, “MERCHANT_OF_FEAR_”
Modular synthesist and industrial techno maven Joey Blush keeps delivering the goods with his new one for Instruments of Discipline. The track is a feature for the label’s new compilation Eating From the Orchard of the Heart, which celebrates their four years of existence with 25 tracks from the label’s roster, plus a few friends and associates. Physical media fans may be interested in the ultra-limited USB version of the comp, which comes on laser etched aluminum.

Synapscape, “Dream”
Tim Kniep and Philipp Münch are casting an eye back on the occasion of Synapscape’s 25 anniversary, with new LP Still being comprised of rerecordings of earlier tracks from across the power noise pioneer’s previous ten records. It’s perhaps no surprise that the record begins with a reconsideration of “Dream (Subliminal)”, the track 1/side 1 of their 1995 self-titled debut. The liquid flow of the original’s ambiance is brought into clearer focus, and a newly added beat guides the listener into the world of noise and serenity in which Kniep and Münch have plied their trade ever since.

“PBK / Spybey / Butcher / Johnson, “First Arc”
Mark Spybey’s never limited himself to wholly electronic experimentation and extremity. Whether through Dead Voices On Air’s more acoustic moments or Zoviet France’s connection to a more catholic tradition of experimental music, he’s always been proximal to sounds far beyond industrial. All those influences and traditions seem to be being brought to bear on his new collaboration with Travis Johnson, John Butcher, and Phillip B. Klingler, all experienced hands in the sort of noisy soup offered up in their Heat On Earth tape.