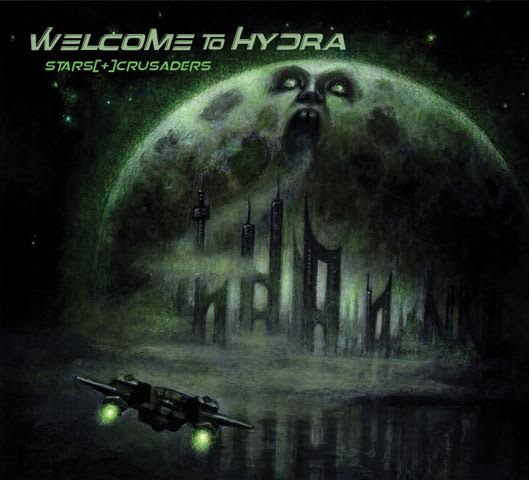 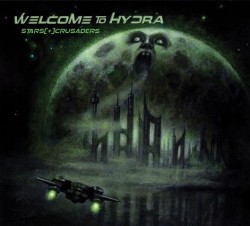 With the benefit of hindsight, futurepop and italo disco don’t seem so far apart. Sure, the lines between the former and trance have been much more clearly drawn, but especially when you throw italo’s cousin space disco into the mix, a whole network of bouncy, future-themed (and often retro-programmed) music begins to emerge. Italy’s Stars Crusaders draw upon these commonalities like few others (their countrymen in Syrian who guest on Welcome To Hydra are a rare exception), and the follow-up to their 2014 debut finds a pleasant enough balance between futurepop’s pulse and the melodic indulgences of italo. But while the narrative of Welcome To Hydra‘s over-the-top space opera (complete with an evil clone twist straight out of Star Trek: Nemesis) is on the mark, the trio at times play things too safe and reach beyond their grasp, causing some turbulence in their space trucking.

Stars Crusaders have been quite up front about the contributions of mind.in.a.box’s Stefan Poiss to Welcome To Hydra and previous LP New Horizons – he’s in command of mixing and mastering on this mission, but within a couple of tracks it’s also apparent that Stars Crusaders have been heavily influenced by Poiss’ songwriting and vocal stylings. The influence of Poiss is both a blessing and a curse in Stars Crusaders’ case. No one has been able to plug futurepop sounds into as wide a range of genres and song structures as Poiss, and as m.i.a.b. and his other projects have developed, he’s gained a wonderful sense for the bombastic, both as a composer and vocalist. In short, he has his sound on lock, and when Stars Crusaders aim for it – check the way drums and Fabio Furlan’s vocals are presented as larger than life amidst elaborate mid-tempo programming on “Once Again” – it’s hard not to compare their efforts against Poiss’ more grandiose work. Another less than favourable point of comparison comes via the staccato vocoder punches which open “Mystic Forest” and sound remarkably akin to those in Legend’s “City”.

That’s not to say that Welcome To Hydra entirely misses the mark. “Under Attack” churns along well enough: a bit of classic futurepop with excellent pacing and just enough aggression to make things interesting. On ballad “The Will” Furlan’s vocal aspirations finally click in a duet with Sabrina Cuzzucoli. When the record sticks closer to the futurepop formula (as on proper opener “The Great Exodus”) the band seems on more even footing, whipping off melodies and harmonics with ease…but also risk losing their sense of identity. The space opera pitch of Stars Crusaders is good fun (lord knows I’m a sucker for electro bands doing sci-fi concept records), but I can’t help thinking their fusion of italo and futurepop still could benefit from some balancing and refinement.