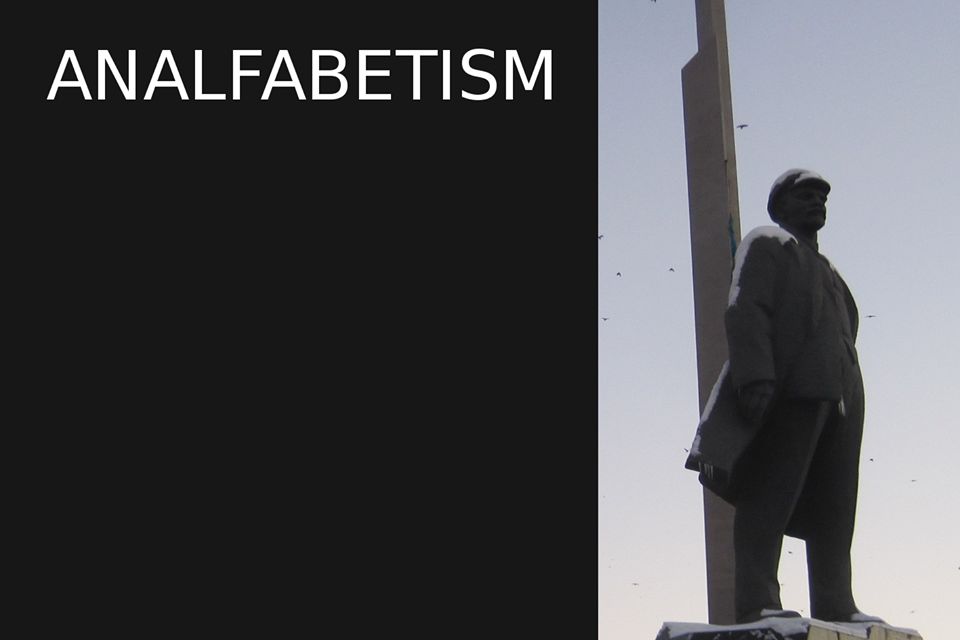 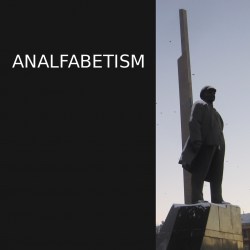 Industrial culture is marked by tensions between fascination and revulsion. Whether it’s the human body, technology, or even the cultural precept that music be “pleasant”, from Throbbing Gristle to all of the present day branches of industrial music, obsessions with the perverse and the banality of the rote crowd the thematics of industrial records of all stripes. We’ve celebrated Fredrik Djurfeldt’s work with Ulf Lundblad in Severe Illusion and Instans for its ability to comment on such irresolvable dialectics with unblinking cynicism, but the Swedish Djurfeldt approaches these tensions quite differently in the first release from his newly rechristened solo project.

Taking the place of the earlier Knös project, Analfabetism is far removed from the verse-chorus, synths and drum programming structure of Severe Illusion. What we have here are wholly instrumental (apart from the odd historical sample) compositions much more in keeping with earlier industrial soundscapes, and perhaps the subsequent power electronics and dark ambient traditions. Apart from relatively brief intro and outro compositions, Analfabetism‘s tracks run long, with static blasts emerging from soupy ambiance, croaking and rolling over each other before submerging once again. While perhaps unsettling (depending on one’s listening habits), there’s nothing aggressive or violent about this work; it can indeed be evocative and almost relaxing. Taking “Genomlidanden” as an example, the hushed loops which act as a base for intermittent punches of fiery noise render the latter almost lyrical. Approached from the right perspective, they seem to function almost as an undecipherable poem (the project’s name in Swedish does translate as “illiteracy”) being recited atop subdued accompaniment.

The differences between Analfabetism and earlier Knös releases are relatively subtle. Sampled noise seems to be rendered in higher detail, with more granular speckles of distortion and scrape. The pieces here also have a somewhat more cyclical structure. While not always availing itself of loops or adhering to sustained rhythms (there’s less use of drum programming here than in Knös pieces), there’s a noticeable rise and fall to the structure of much of Analfabetism that’s somewhat tidal or respiratory. I’d hazard to say that Lustmord seems like something of a useful point of comparison for Djurfeldt’s latest work. Though never quite as droning or echoing as Brian Williams’ famed sound, Analfabetism walks a similar line astride doomed and contemplative moods, and “Inget huvud alls”, with its sustained pad and slowly circling clockwork clacking, feels especially close to the master of dark ambient’s work.

The serenity which can come with noise isn’t unique to industrial, but it’s a seeming contradiction which some of the best industrial composers have returned to time and again with fantastic results. I’m not sure that I can credit Analfabetism with the specific social criticism Djurfeldt has taken up with Severe Illusion, but the aesthetic tensions it identifies are no less fruitful. Recommended.

Buy it from Kollaps in Europe, or Malignant in North America.