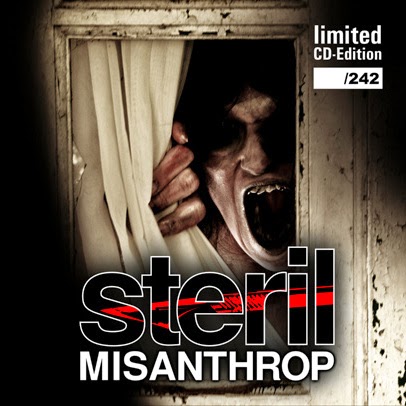 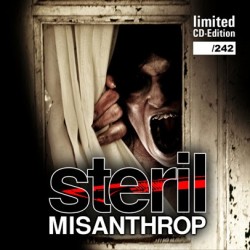 Steril are pretty beloved amongst a specific subsection of industrial listeners. I hesitate to say “of a certain age” although that charming workaround for saying “older fans” is pretty much true; despite having a number of albums that are very well-regarded amongst 90s rivetheads, the German trio haven’t broken through to the broader audience for this sort of thing in any serious way since their heyday. That said, a new album (the first since 2006’s respectable Realism) still has some cachet to it, and Misanthrop does a pretty good job of delivering what you would want from it.

Now Steril are a band who have sounded like a lot of different things over the years (and sometimes even on the same album) so it’d be a mistake to label this record a “return to their roots” or somesuch. If anything the LP manages to delve a little deeper into the band’s DNA than even their earliest recordings and comes out often sounding like a fairly straight classic EBM record, albeit one with some very distinctive touches. The opening track “Glas” specifically feels like it’d fit well into your average neo-classic body music set without missing a beat, although there’s no mistaking the delicate and quirky lead that and pad combo and guitar accents that pop up midway through as anything but their handiwork. Some tracks like “Fan” or “Tanz” really play up the more distinctive and characteristic elements of their sound over the EBM framework, while a few others pull back and consequently feel underwritten, such as “Netzwerk”.

If nothing else, Misanthrop reminds of us how distinctive vocalist Mähne Meenen is. Sticking mostly to his rough and growling delivery – although he does get some nicely crooned licks in on ballad “Architekt” – Meenan sounds exactly as he should, all piss and vinegar, with a sardonic delivery that cuts through the language barrier (for the first time the vast majority of the songs on the album are performed in German) with a powerful quickness. His approach to the breaksy “Tanz” and the intricately constructed “Karnivore” is reflective of the band as a whole: tightly controlled but able to deliver a characteristic performance without feeling staid or predictable.

And that’s it, really. Misanthrop isn’t the best Steril album, but it sure as hell sounds like a Steril album to my ears, and as someone whose tastes became informed around the time the band was at their peak, it’s enough to tickle my fancy good and proper. I mean sure, even if you aren’t an old school fan there’s stuff to recommend it, it’s pretty tight and stays varied on the arrangement and programming front for example. But I suspect the real appeal for the people who seek out this fairly difficult to obtain release (for the life of me I can’t figure out if it’s available in any digital format, I only have a copy because a kindly friend ordered one for me from overseas) will be in hearing a beloved cult act do what they’ve always done. It’s Steril, and that’s pretty much all I needed it to be to enjoy it, that it’s objectively pretty good is just the icing.