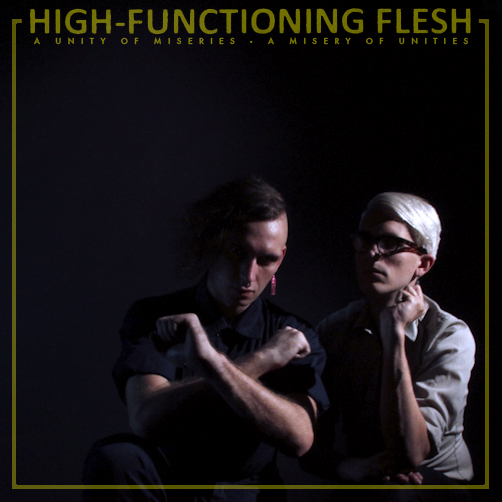 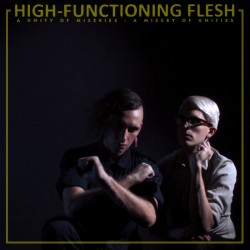 A dissection of High-Functioning Flesh’s A Misery of Unities – A Unity of Miseries reveals some fairly identifiable influences, but whatever you do, don’t call it retro-EBM. Unlike the muscle n’ hate of the Nitzer and DAF worshipping Anhalt school, the Los Angeles duo of Susan Subtract (ex-of synth glam weirdos Branes) and Greg Vand drink deeply from the aggressive funk of Cabaret Voltaire and Portion Control. Sure, you could describe what HFF do as a throwback to earlier schools of industrial, but that label fails to encapsulate the vitality and immediacy of these seven songs. More than any vintage synths and drum machine, it’s the purposefulness of Vand and Subtract’s approach that comes across as their greatest asset.

Comparing the material on A Misery of Unities – A Unity of Miseries to the rougher versions found on their 2013 demo is instructive, if only because it illustrates exactly how fully-formed High-Functioning Flesh has been since the jump. None of the four songs that appeared on the latter tape have changed much in the year since we since heard them; the higher-quality recordings don’t improve the tracks as much as they reveal how good they were all along. In some sense that speaks to how well HFF understand the workmanlike tenets of body music; better production isn’t invoked for the sake of polish or pop appeal, it’s there to help the music engage you more efficiently, communicate with you more clearly and move you more forcefully. It’s how this 27 minutes can feel twice its length, and how you can reconcile frequent bursts of punkish hostility with machinelike efficiency.

The best songs from the demo, “DNA Video Gestalt” and the plodding “Touch Oblivion Icon” seem especially invigorated by the change in context. Both feature some of Subtract’s best work as a vocalist, switching effortlessly between clean voiced singing and sneering yelps, either as an accent or to shift the feel of the song without compromising the buzzing synth arrangements. The delayed chirpy leads that appear on so many of HFF’s songs may be the more recognizable element of their sound, but it’s Subtract himself who proves to have the most utility, scaling his performance from reserved and mechanical to unhinged as required. Its handiness as a skillset is especially evident on briefer tracks; “Rigid Embrace” is under three minutes long and is one loping 16th note groove throughout, the vocals providing all the variation it requires.

That the material we already know can still feel fresh almost distracts from the growth displayed in the new tracks. Of the new songs presented here, the best is “Self-Management”, more than a quarter of its brief four minutes dedicated to an intro of clanging percussion and chanted vocals. It’s a move that the band might not have tried a year ago but feels totally natural here, the bassline and drums emerging only when we’ve been sufficiently primed for them. That build of tension, not to mention Subtract’s desperate growl (which, as mentioned earlier and by Subtract himself, has something of Portion Control’s Dean Piavanni reflected in it) makes it easy to ignore just how much swing and groove there is under “Self-Management”‘s verses and choruses. Nestled in a synth framework far more nuanced than the drum/bass minimalism of most retro-EBM, it brings work by Babyland and The Pain Machinery to mind; far more musically realized than an initial pass at its aggression might indicate.

On a similar note, the softer pads which come to the fore on the second half of the EP might not go noticed on a first go round, but their presence on “Touch Oblivion Icon”, “Self-Management”, and especially closer “The Deal” keep the record’s harsher elements in sharper perspective. Maybe more importantly, they also point to High-Functioning Flesh’s awareness that the bands they’re sitting in proximity to didn’t cleave to a hermetic, pure strain of electronic body music: pop, new wave, and perhaps especially funk were all in the mix, and they are on A Misery of Unities, too, if you know where to look.

In the interests of full-disclosure, we’ve been supporters of High-Functioning Flesh since their tape dropped, a stance which was only solidified after catching their live set. That said, the move from a quick introduction which presents a band’s aesthetic fresh and unannounced to a more considered (and anticipated) release isn’t a guaranteed thing, and HFF have certainly managed to build buzz between the demo and this release. Without deviating too far from the violent excitement which got them in the door, they’re ably demonstrating that they know how to measure its delivery, both in length and belligerence. Far from being content with crossover hype or traditionalist conservatism, High-Functioning Flesh deliver on their own terms. Highly recommended.